The Junior Indiana Master Naturalist group came to Woodlawn Nature Center to hear Erik Vosteen, a regional primitive skills expert. He started talking about archeology and how professionals learn how people lived in ancient times. He also touched on ethnography, which includes living with local ecosystems. A point he brought up often is that people's needs have always stayed the same over time. Resources are things we need to live. 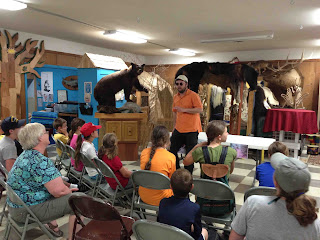 Erik had a great basket of possibilities! 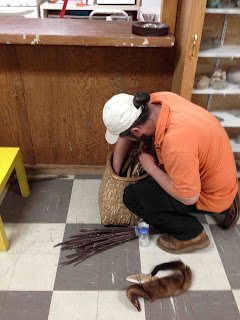 He took us out into the woods and talked about the UNIQUE resources at Woodlawn Nature Center. The woods are a very mature oak woods. This little spot of 10 acres is a part of only 500 acres of land like this state wide--pretty unique! In older times, however, this would have been rather boring as it is a low diversity wooded area.

Looking around at the area, there were many resources that could be used. A tree could provide nuts, lashes (stronger than leather!), dye (yellow), and more. As cultures mingled with the ecosystem, they found useful things. In most areas, where 2 rivers came together, there was a prairie as people made them to grow food and to see in the outlying land more clearly. 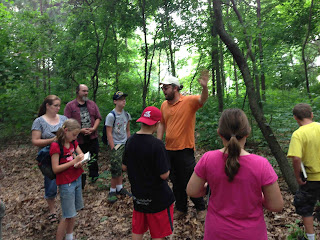 Invasive species were touched on, as our interaction with other groups introduce resources that may not be the best for the area. The Emerald Ash Borer is a common current example of how an invasive insect can wipe out a huge amount of trees. American Chestnuts had blight issues, though there is a group that is resistant to the disease in Michigan when others were wiped out. While some resources were traded and shared in the past, Erik compared our current world to a blender! Having lived in many places overseas, I know we have a truly global society in many ways. 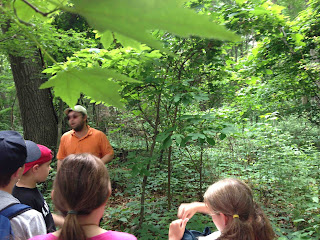 He talked about various trees and resources as we passed them, such as the small sassafras tree. I usually identify this one as it has various shaped leaves. Some are lobed, others look like mittens or are unlobed. It has often been used for sassafras tea. We have a couple in our front yard that are suffering significant woodpecker damage--too bad. 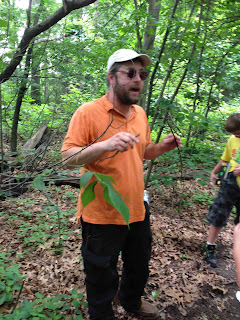 We also talked about hickory. The wood is strong and is good for bows. It's one of the strongest woods of the area. The nuts can also be used, though some are bitter. The bark can be used as a rope and to tie things together. In past times, if a line broke when plowing, they would use hickory bark as a replace for a time. It is only strong while fresh and wet. 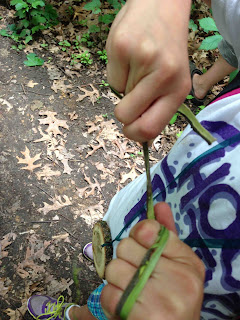 We tested the strength and talked about the cambium, as we'd been talking about parts of trees earlier in our studies. The cambium is the living portion that produces new cells within the tree. 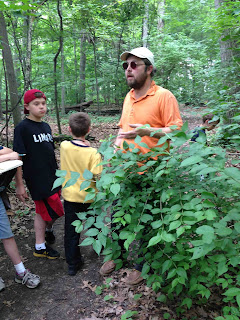 In the woods we saw a big dirt pile and wondered/discussed how long it had been there, why it was there, etc. I often see tracks up on the pile and the children like to climb on it. We didn't come to any conclusions; however, it was interesting to speculate and think about clues that might give us more information. The Asian Bush Honeysuckle is an invasive plant in the area as well. Many areas are working on controlling it better. 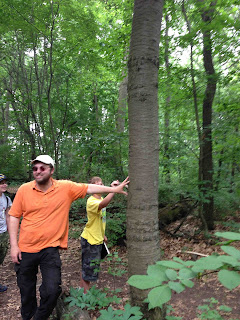 We saw a yellow birch, which was often used for toboggans, spoons, bowls, etc. Birch sap can also be tapped after maples and might be flowing now. You can see the rings in the tree from where it might have been tapped in the past, wounding the tree slightly. The tree has a wintergreen flavor in it.

A couple of other things I learned from Beth Cauffman from Woodlawn Nature Center from a visit of a long ago neighbor of the Center . . . there are 2 time capsules on the property--these will be interesting to investigate as we approach the 50th anniversary. Also, a street used to run right through the middle of the forest. I never would have imagined it! I look forward to talking to the neighbor soon to learn more. 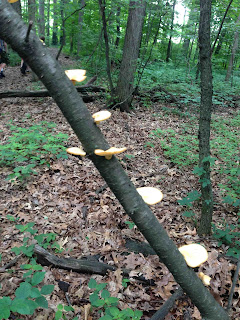 We saw mushrooms growing on a dead branch--I need to learn more about these. We talked a little about turkey tail fungus and it's anti-cancer properties. Neat to hear health answers from nature! We talked about wild edibles some and the need to be cautious, especially with funguses as there are many poisonous look alikes. However, of green plants, many are edible (about 90%), good identification is wise. In a true survival situation, test a small amount before eating more. 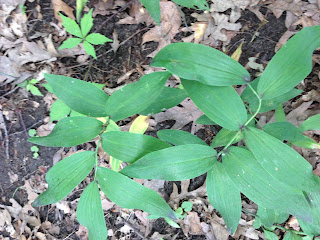 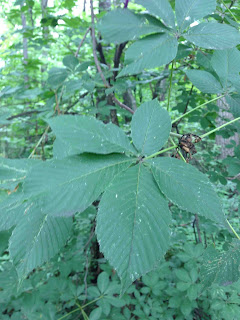 A young buckeye tree was also growing near the path. There is a line along US 30--it is rare to find buckeyes north of that area. Some buckeyes may be poisonous. The bark can be soaked in a large barrel of water and the water will stun fish. Then we started talking about ways that native groups might have fished. When fish that run upriver to spawn, the fish might have been speared or trapped. Native designs always have a release. Some ways are illegal now. The old methods of hunting were incredible effective. At times they would round up 20 deer at once. However, the food and materials were used. The Ojibwa still spear fish; however, they do so sustainably. They survey the lake and know to take only 6% to manage the resource. 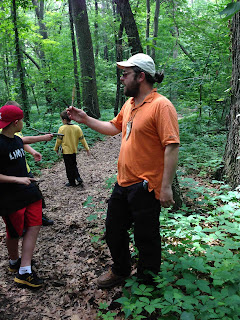 The Jr. Indiana Master Naturalists noticed something around Erik's neck. He showed them his flint knife. The sharp point will last 1 month to a year, while steel last 50-75 years. As a flint knife dulls, it is sharpened and made smaller over time. All of the knife was handmade with natural resources. Pine pitch was used as glue. Sinew was made for lashing. Paw Paw wood was used for the handle.

Any skin can also be used as a glue. Boil 1 to 3 hours, strain it and it is a strong glue. Unflavored Knox gelatin would provide a similar effect. (Side note: I remember making "stickers" out of gelatin as a preteen! Glue in action!). Various parts of animals were more valuable, such as the left side deer jawbone, as it was used to scrape corn. We also talked about "Elkhart" and where it got it's name. There are various reports, such as from the Elk clan, Island Park being shaped like an elk's heart, or from the Miami. Here is one article on the name. 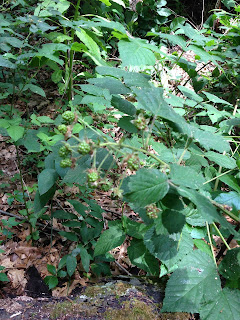 Blackberries and black raspberries are also forming in the woods. Yum! 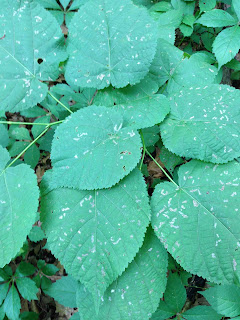 Basswood is also present. It is good for drums. It can also be thrown in a pond for 30 days. The fiber that is left is used for textiles. Here is information about its name and wild edible status. 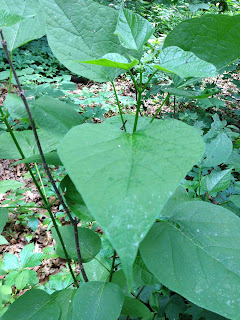 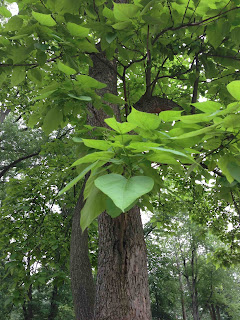 We also saw the Catalpa tree, with large, heart shaped leaves. There is larger one closer to the Nature Center. 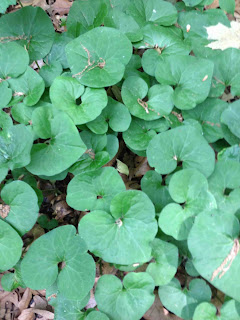 We saw a Wild Ginger patch. This is good to see. 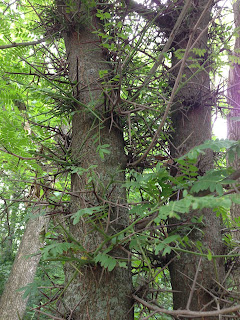 This Honey Locust near the back of the Nature Center is unique with its doubly compound leaves. Erik didn't know of any real uses for the Honey Locust in Native history, though the thorns are quite impressive! 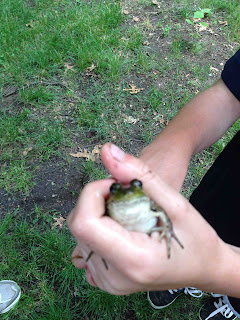 The resident frogger quickly caught a Leopard Frog and then released him back in the pond. He caught frogs all week! 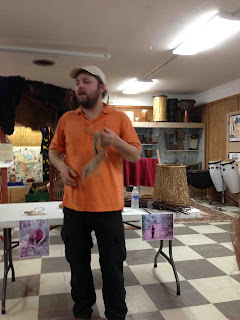 Back inside we talked about STRING! It is one of the most important developments in history. We use string to tie things, for toys, bowstrings, snares (more effective than hunting with guns), nets, etc. String can be made with no tools in natural areas. After string is made, other tools can be made. Plant fibers are valuable. Break and pull to see if its strong. Fiber holds plants together and are valued for length, strength, and pliability. Animal fibers, such as from the deer's inner leg (sinew) are good, yet it gets soft when it's wet. Every animal with muscles will have fibers like this.

Erik brought dogbane for us to practice making string. Farmers call dogbane a weed, yet he calls it a resource. 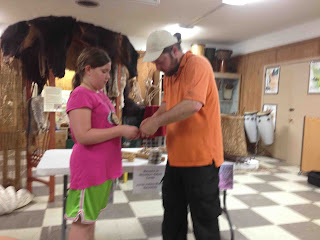 We stomped on it first, Broke and removed the pith (going back and forth in small segments and then removing), twirling between hands to help remove outside shell, and then twisting to make cordage. As it became slack, it would kink, or turn back on itself. We twisted in the same direction and then it wrapped back around each other. It's kind of neat to have this "skill" now! 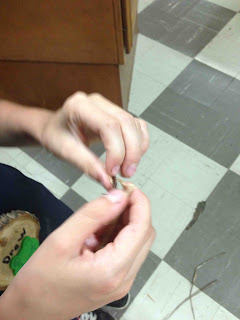 Other views of Erik's handiwork and possibilities! 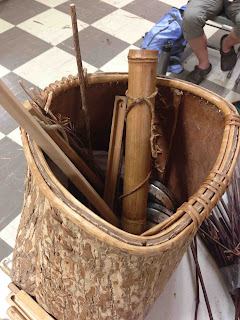 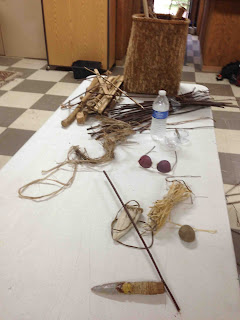 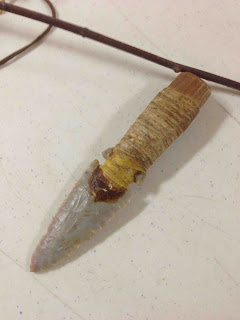 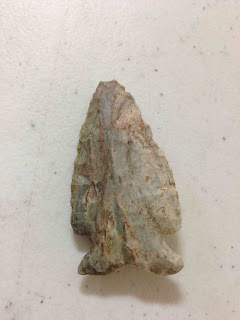 One girl brought something found nearby. He was able to identify it to a particular age from the material, shape, and design. It was an Early Archaic Quarter Point. He also talked about the cradleboard, how it cannot be made full sized as replicas as they should be made when a baby is 4 weeks old by the father. There are several smaller versions in the wigwam at the center, so this would make sense. He talked of prairies being "maintained" and strawberry patches planted by Native groups. 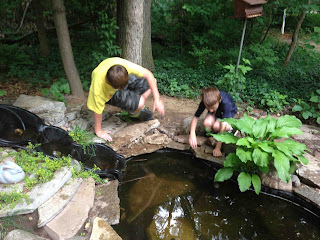 The frogger in action! 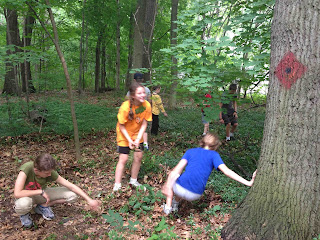 Pulling invasive plants as a service project and getting volunteer hours. 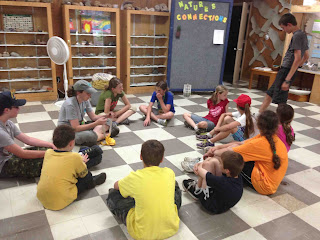 Learning how to play an American Indian game. They played it almost every break for the rest of day camp!

Want to hear more from Erik? He is helping with the Great Lakes Traditional Gathering in July. Sounds like a great event!
Posted by Carla Gull at 11:27 PM