Yesterday, we checked out the Dinosaur Party at Woodlawn Nature Center. PaleoJoe brought a new exhibit on Fossils of the Michigan Basin from the Devonian time period. 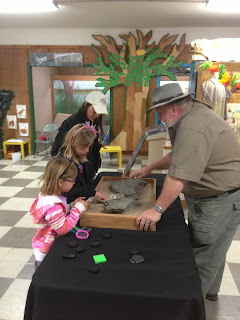 The kids played outside for a long time and then checked out the exhibit. They searched for various fossils and interacted with the materials. There were a few places they could touch, feel, and play a search and find with fossils. 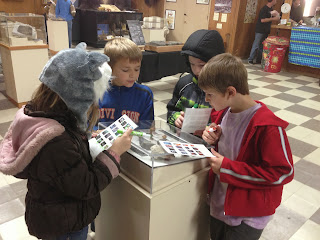 I really liked this information on crinoids. I've known about them for quite some time. They were mistakenly thought of as plants previously (they kind of look like a flower with a long stem), but are actually sea animals. Crawfordsville, IN is known worldwide for the quality of crinoid fossils that are found there. 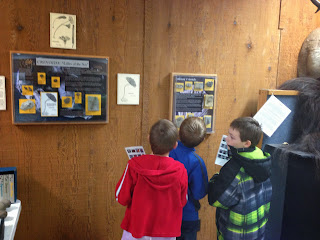 We bought some of the author and paleontologist's books and were able to have him sign them! We're looking forward to reading these and going back in time! 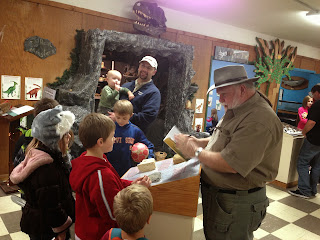 There were chocolate trilobites for sale, as well as many different fossils. It was interesting to see so many people bring in fossils to ask PaleoJoe. One was really neat which showed the "track" of trilobite as it scooted along the ground. 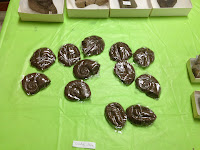 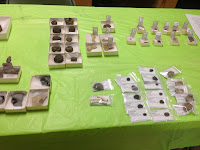 There were also other activities available, such as digging for fossils, making fossil imprints, fossil rubbing, and dinosaur cartoons to watch. Many people were also enjoying the other exhibits, like the wigwam, the wildlife viewing window, and going on hikes in the woods.

The concession stand had several options with dino names, such as dinobites, at very reasonable prices. There were pulled pork sandwiches, meatballs, dino cookies, and more.

The exhibit will be at Woodlawn Nature Center until the beginning of March, so take some time to check it out. It was neat to see children spinning around and saying how AWESOME it was to see these fossils. The adults also liked checking it out, with representatives from the Michiana Gem and Mineral Society, and other rockhounds flocking from Niles and Dowagiac to see the exhibit at the Center. By the way, we really liked the show Michiana Gem and Mineral Society put on in August.

There were also a couple of video clips from Fox 28, such as segment 1 and segment 2. Cool stuff! PaleoJoe was fascinating to listen to--I was able to help with a field trip the previous day--neat! We really appreciated this after digging for fossils earlier this summer and visiting The Dino Store over in South Bend.
Posted by Carla Gull at 10:43 AM

Email ThisBlogThis!Share to TwitterShare to FacebookShare to Pinterest
Labels: Fossils