We had several gathering crafts, such as gluing corn kernels on an ear of corn. This guy on the right was so interesting! He is a little younger than some of the other kids and wanted nothing to do with the corn. He came a little closer and closer. I showed him how I put a few on and asked him to "push" a few into the glue. Pretty soon, he was the one picking up the kernels and filling up his corn. Those little hands benefit from working with small items carefully like that. 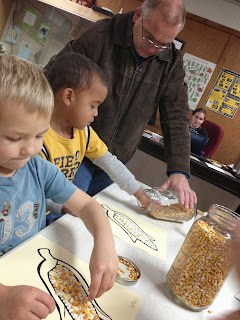 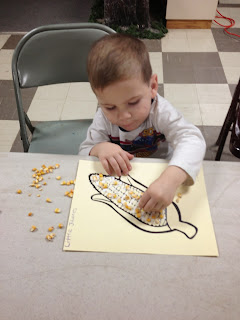 They also had insect rubbing plates and fall harvest stickers to explore. Later, we went to the wigwam for stories and talking about different artifacts. 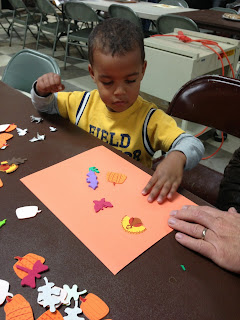 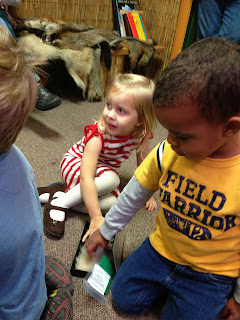 I shared some pictures and books from Plimoth Plantation, which show more of a balanced view of the "first" Thanksgiving. In looking for activities, I had actually found several "cute" activities which seemed to be more based on myths than realities (like pilgrims using buckles or having no food, though they were in an area full of rich food), so I was hesitant to perpetuate those myths. I shared our experiences visiting their before. Beth shared a book about coyotes, written in a native style, and the children explored coyote fur, a claw, and a tooth. Woodlawn has so many Native People artifacts. It's pretty impressive. I like the nutting stone with multiple holes to crack open many nuts at a time. 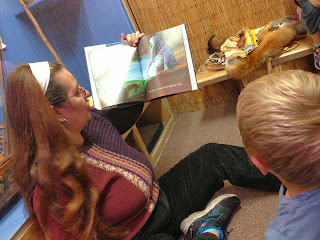 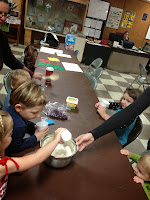 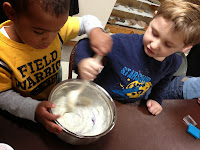 Outside, we found LOTS of maple leaves--the forest looked awash in yellow right now. We talked about making maple syrup, using acorns and hickory nuts, and the need for wood and other natural resources. 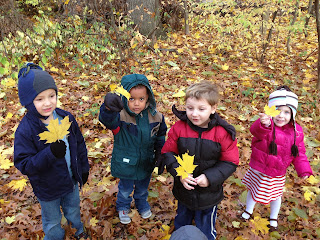 The huge spider webs were still a hit! 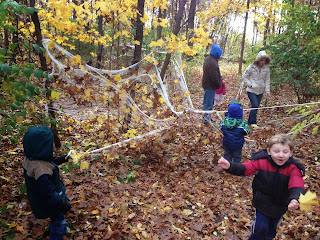 As we got closer to the Center, the kids liked using the climbing area of Nature's Connection. 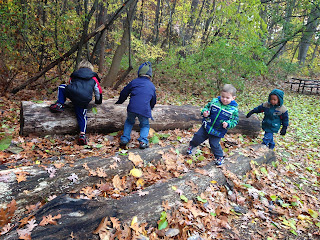 There was even a little snow on the ground. 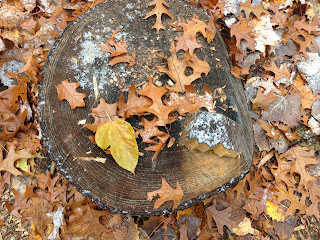 Jumping time! We came in and had a snack of blueberry pancakes, pumpkin bars, maple syrup, and sausage. These are all items that might have been eaten at a native harvest feast. 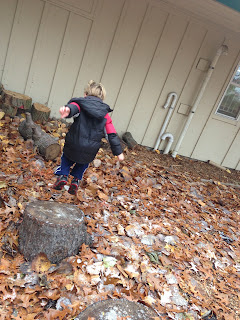 Later, the children did more exploration in the Nature Center! We look forward to starting up again in the New Year!
Posted by Carla Gull at 11:21 PM