This afternoon, I took the younger boys over to the Michiana Gem & Mineral Society Show at the South Bend Fair Grounds. I haven't ever really been to one of these, but enjoy geology and earth sciences, so thought I'd check it out. Plus, it was the 50th year anniversary!

Story of my life these days . . .  the child below did NOT want to go. But we had a great time together and said he really enjoyed it later. My advice--push through. They just don't know they'll like it yet, but they will once they are there. :-) He was so interested in everything!


There were several educational displays of personal collections of club members. These were neat to look at. We could see textures, colors, shapes, and more! 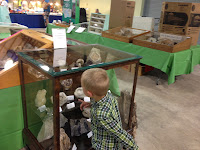 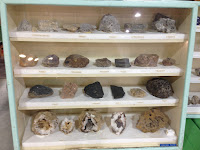 The Touch Down Jesus display was especially neat. I went on a field trip with my oldest to Notre Dame this last year and we saw this mosaic/mural. It was neat to see the many rocks that were used in creating the art and where in the world they were found. 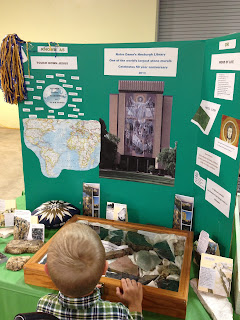 He was excited to see this turtle shell in the fossil collection! There were numerous displays, including one on gold panning! I've done this several times in Georgia. 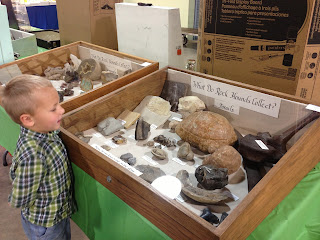 I was surprised he navigated toward the obvious jeweler stands. With a 1-year-old I haven't been much jewelry recently due to the grabby nature of the beast; however, I still like jewelry. Maybe I'll need to buy something next year! 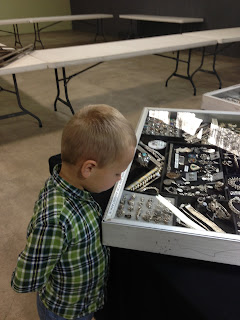 I especially loved the azurite! All my favorite colors! 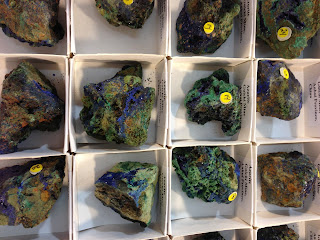 There were many options--slices, eggs, rough cut, spheres, natural state, and more! 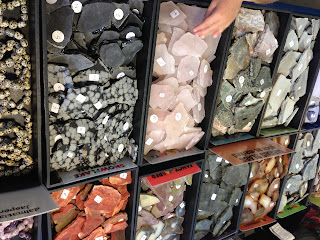 It was the group's 50th Anniversary for the show! They had golden chocolates to celebrate. How neat and appropriate! The group meets on the 4th Sunday of the month in the afternoon at Our Redeemer Lutheran Church in South Bend. I've checked out their newsletters and field trip files on their website and am impressed with the children's activities, field trips, and other activities they do as a group. 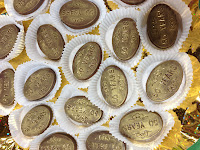 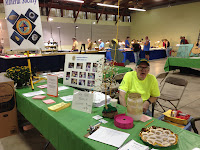 The Michiana Gem & Mineral Society hosted a silent auction--I had never seen one like this. They had many items on the table and you could bid for whatever you wanted on the paper. After 15 minutes, the highest bid took the item and new materials filled in the empty spot. The prices were quite reasonable. Members donate items to benefit the group and the price is right! 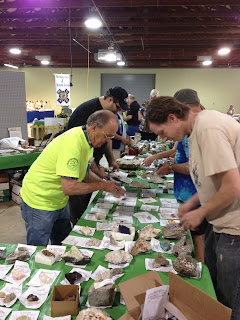 We found rock candy part way through the show. It helped while we looked at other booths, though I was surprised at how interested he became in the various items. 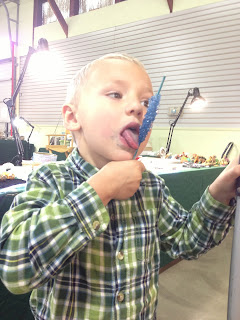 There were strings of beads, kits to make rock trees, jewelry, and more. 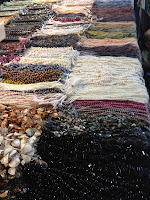 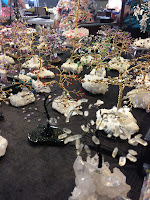 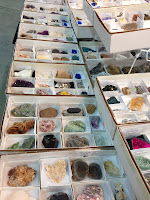 We went to the kid's area to check things out. There were several games and activities. He was so brave putting his hand in the dinosaurs mouth! 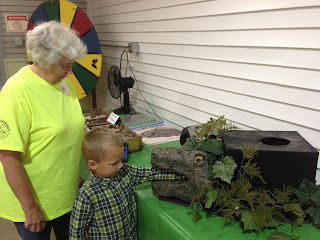 He got to dig in the sand and had prizes for each activity, plus they gave him additional rocks and fossils. These were really worth my entry fee. Imagine if I brought all the kids! 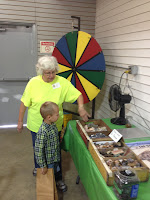 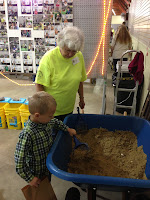 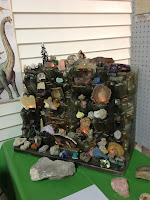 We even saw a few dinosaur relics! 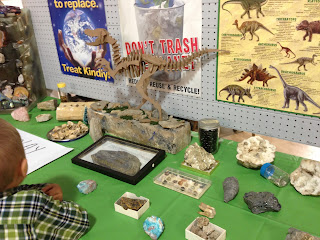 We could also see various lapidary and glass blowing artists. It was neat to see them in action! 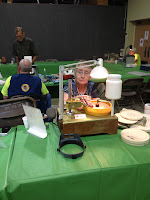 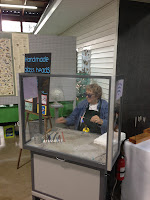 If you're interested in seeing more fossils, check out Woodlawn Nature Center's exhibit, Fossils of the Michigan Basin, coming in November.

Here are a few other posts on fossils and geology that may be of interest:

Our visit to The Dino Store

The Power of their Own Stuff--Another reason it's great they gave away a decent amount of real pieces to the children.

Looking at rocks at Cobus Creek