During our visit to Pokagon State Park today, we decided to try out the toboggan run. We've heard about it for a few years and finally live a little closer to visit. It took us about 50 minutes to drive out there from Bristol. The toboggan run is refrigerated, so it's a good option even if there is no snow. 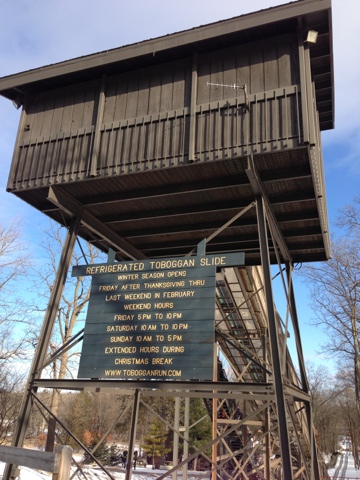 Hours are clearly inscribed on the tower, but here is the link to www.tobogganrun.com as well. It also has a virtual ride, history and facts about the run, and more detailed information about the run. 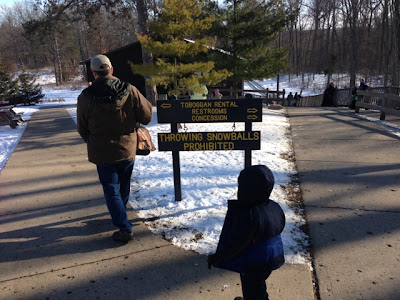 You rent and return the toboggans on the back side of this building. Be sure to take a driver's license and money (cash and credit cards accepted) for rental. It cost $12/hour for one toboggan (which can hold 3-4 people). (UPDATE 2014--looks like it is $13/toboggan, plus the $5/car entrance fee to the park). There is a warming house with snacks for sale. Since the baby is too small for the toboggan (and the preschooler wants to go "tomorrow"--his token phrase for not wanting to do something now OR EVER), my husband and I took turns in the warming house with the younger kids and others who didn't want to go on the run. No outside food is permitted, though we just kept food in the car for lunch/snacks and ate out there when we were hungry later. 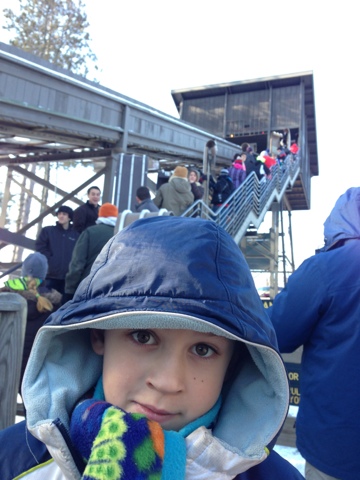 Lines were slightly long for the first day of the year and they got longer as the day progressed. It seems like the earlier the better. Getting there around 10:30 would have made a world of difference, though we still thought we had good value for our time there. Friday nights might be a good time to go as well. In addition, if you rent 2 toboggans on a Friday, the third is free. This is a great option for a group of people and/or families to try. A teenage girl in line said on New Year's Eve there was no line at all. They came back for more today and were trying to beat their speed. 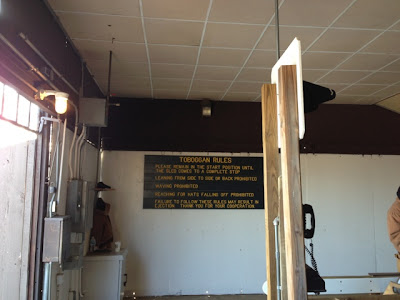 My son was a little scared when I went down with him. We looked over the rules and I reassured him that people do this all the time. As long as we followed the rules we'd be safe. 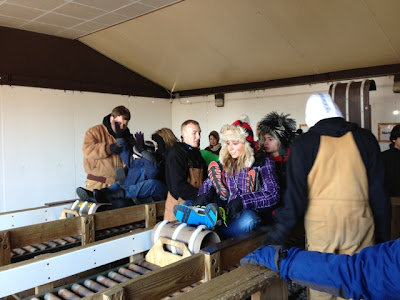 I thought it was a little awkward to get up on the toboggans and in position, but after trying it a few times I'm sure I would get better. The workers were friendly and helpful. My son felt bad because we were making them work on New Year's Day--thanks for being there for us!

It was only 25 degrees but a sunny day. I saw a variety of clothing options . . . some were comfortable in jeans and sweatshirts, others had hats, gloves, snow pants, etc. I think I would have been fine with my super warm boots, jeans, a few layers, hat and gloves. I chose to wear fingerless gloves with a mitten top. These let me have easy access to my phone for pictures or other necessities. 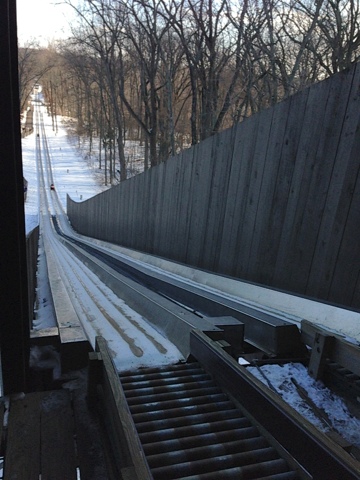 Wheee!!! My oldest exclaimed, "This is way cooler than sledding!" My husband went much slower on his own, but then we both went 30 miles per hour with one child and one adult on the sled on the light sled. Supposedly, the heavier sleds (30 pounds heavier!) go faster and more people weight probably make it go faster. I heard reports of 39 mph on the heavier sleds. I noticed some keeping their heads down for a more aerodynamical run. We kept going and going and going. The walk back to the stairs is a little lengthy when carrying a 35 lb. toboggan. We saw some people driving back and forth with their sleds as the end of the run is near the inn's parking lot. However, a little exercise is probably good for me. The site is also quite accessible. The path is paved. I saw strollers and wheelchairs out, so there are some options for accessibility issues.

On a semi-busy day we were able to make 3 runs (while switching out participants) in 1 hour. I think it would be neat to turn it into a science experiment to see which techniques, runs (north or south), toboggans, and weight of people would make it go faster. Maybe next time! We'll definitely go again as one son won a gift certificate for the toboggan run as part of the first day activities.

Tips:
Go early.
Take turns with the younger kids and retrieving the toboggan.
Dress in layers.
3-4 people on the sled would probably make it more fun.
Bring an ID card.
There is an entrance fee to the State Park as well.

To add to this experience since it is a little of a drive for us, I recommend bringing sleds for extended (though not as thrilling) time on nearby hills. There is also a nature center on the premises (check for days/times),  but it was closed today or we would have visited it as well. There are several areas to hike and a winter hike is rather interesting. People were also out cross country skiing, though rentals and the official season are not out as there is not enough snow. The inn has a small store, dining area, activity room, fish, games, etc. Looks like a fun place to stay!
Posted by Carla Gull at 9:31 PM