We weren't too far from the Pokagon State Park Nature Center after visiting Maple Wood Nature Center in LaGrange today. We checked the hours yesterday and knew it would be OPEN. As a side note, we arrived around 1 pm and the Toboggan Run was nowhere near as busy as it was yesterday. 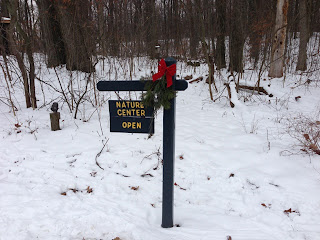 Our third boy was immediately intrigued by the snowman about his size. He wanted to hold his hand. :-) Oh, our fascinations with sculpture! 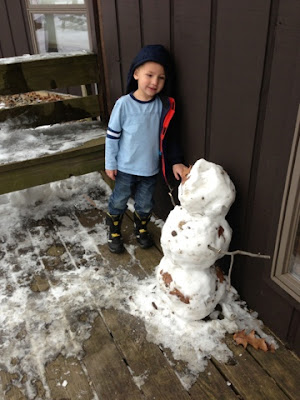 Since we'd already been to a nature center in the morning, the boys weren't too excited about visiting . . . so we compromised. Mom (me) wanted to spend some time in the center, but they could go sledding with Dad after checking out the center for 5-10 minutes. Almost 2 HOURS later, we still hadn't heard a request to leave yet. The boys were immediately engrossed with what they were doing as they "played" or interacted with nature. They touched things, guessed what was in the touch box, quizzed themselves with the games, watched the snakes, turtles, and amphibians, and loved the wildlife viewing area. 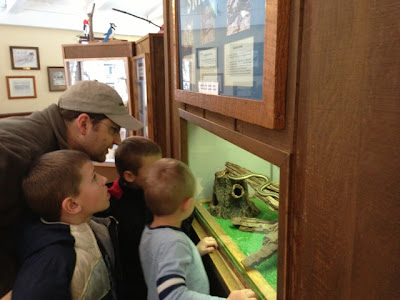 Christmas was still in the air. There were several seasonal displays that most likely change with the seasons. I took the opportunity of learning about the mistletoe first hand and got a kiss from my husband. Cute pinecone ornaments! 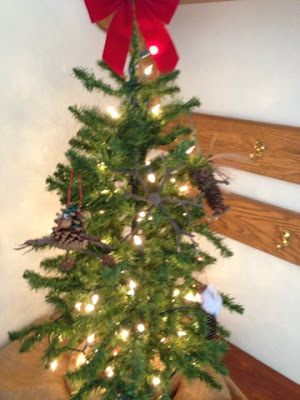 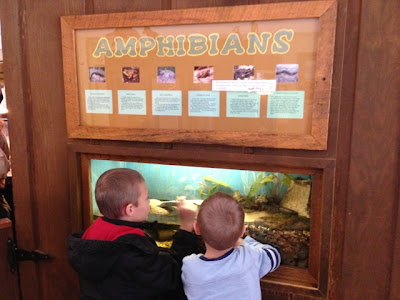 Cardinals and tree rings were around . . . my husband and son #2 were close in their hypothesis for how old the tree was when it was cut down. 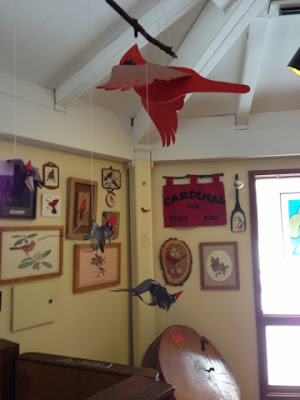 The exhibits were very kid friendly; however, there were also informational displays for adults to better understand the history and such of the area. 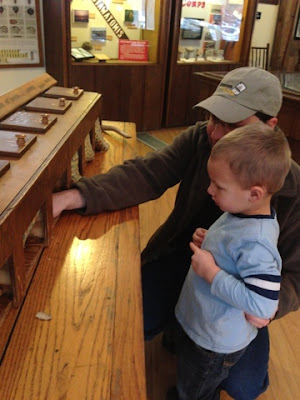 This type of display is always a hit! What could it be? 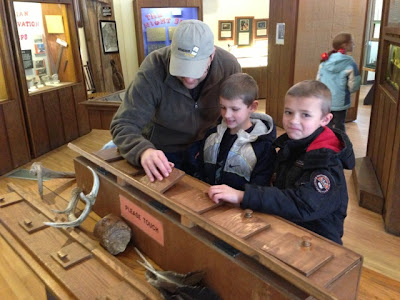 The turtles were fun, too! The exhibits focus on wildlife pertinent to this area, which is informational. 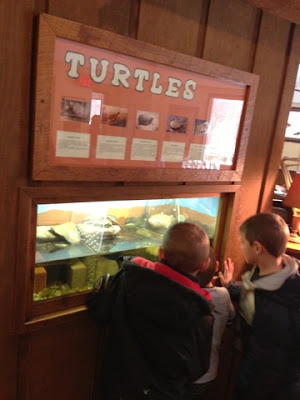 The wildlife viewing area was so fun! Lots of birds! We'd heard from Elma Chapman earlier that morning that the sounds from outside were piped inside to hear. However, it wasn't until we were the only ones in the Center that we could actually hear the birds, which was pretty neat. When we went back to the car; however, the chirps were more distinct outside. 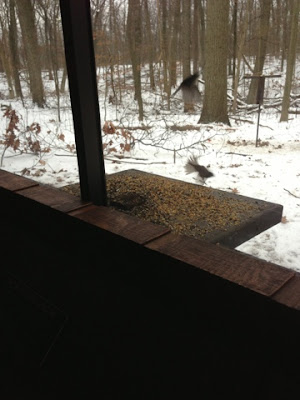 It's been fun to learn more of the birds at feeders, their characteristics, and how to distinguish males from females and such. My husband was actually getting into it as well. We had many great conversations as we watched and learned. There are several ways to help learn the birds at the Center, such as pictures with labels, books, lists of birds and mammals seen that day, a naturalist, etc. 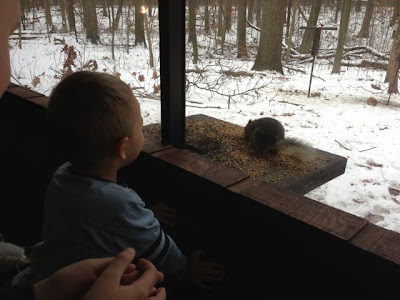 A squirrel came up close--look at that joy and excitement! 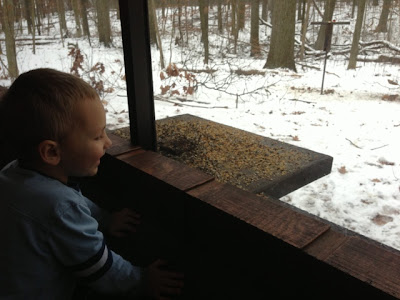 The program schedule for the week was luring me back! My husband saw scatology listed and knew I'd want to attend. The program schedule should be out soon. In my opinion, this could be a stand alone destination, but there are several activities in the state park and surrounding areas that would be good additions for a day trip, such as a hike, sledding, cross country skiing, water sports in the summer, the toboggan run, etc. Many options! The center is free; however, there is a fee for entering the park. Hours vary, so check ahead. It was nice to have "extended hours" over the winter break.

The naturalist on staff was helpful in sharing information. She also told us about patch and pin programs at the parks. Watch for more information on these!
Posted by Carla Gull at 11:35 PM