What an interesting start to the day . . . we woke the boys up early to explore a new to us nature center. They did NOT seem excited about the prospects and dragged their feet as they got ready. It got even better as we drove.

Boy 1: Why are we even going there?
Me: So you can play at the nature center.
Boy 1: You can't play at a nature center.
Me: What are you talking about? I see you play at Woodlawn Nature Center all the time.

So, the whole concept of PLAY--is it part of nature education? Are we using play to help connect kids with the natural world around them? Hmm . . . more to study and experiment with this topic.

We also talked about snow and the different types of snow they had been around the last few days. The boys noted that sometimes they see clumps of snow, other times it's like "rain snow" as they called it, flakes, or little pellets. I've always heard of how there are many more words related to snow in one of the Eskimo languages, so found this interesting to read. After reading the article, I realized we do have more descriptors of snow in English than what I initially thought. While SNOW seems like such a simple word and applies to many different uses and situations (noun and verb), we describe it differently from time to time and recognize there are many snow types and descriptors. 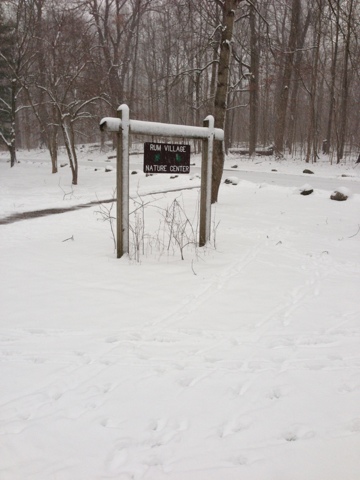 The Rum Village Nature Center is a cozy place to study and play with nature. Yes, I said PLAY. I don't know what my son was talking about early this morning. I do find, however, that many times, the interaction I HAVE with my boys when we go to these places is key. I can be there to explore, play, and learn with them and this is key to a positive experience. Just in case you wondered, I did threaten them with no technology for the weekend if they continued wrestling in the center as we arrived. I only had to give one warning--getting better!

There is a tunnel to crawl through. Somehow, my sons convinced me to crawl through it and to send the baby through it as well. We were able to see a couple of animals that might be underground. We also tried to identify the objects in the various slots. 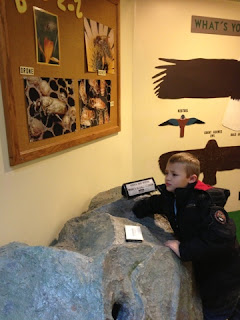 The boys checked out their wing, I mean, arm span. They measure about the size of a great horned owl. There was also a display on bees, but they are on vacation for a little while. 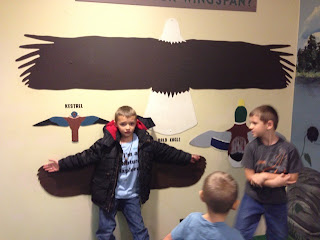 The boys enjoyed matching the colored shapes to their shadows in the forest scene. Then we tried to find where the squirrel, rabbit, jack-in-the-pulpit and other items were hiding. 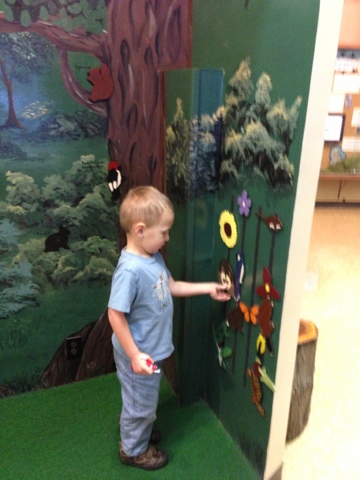 There was a touch table that invited us to feel, investigate, and examine. I was impressed how my oldest turned this opossum skull he was looking at to have a whole different view and perspective of the skull and teeth. Lots of textures! 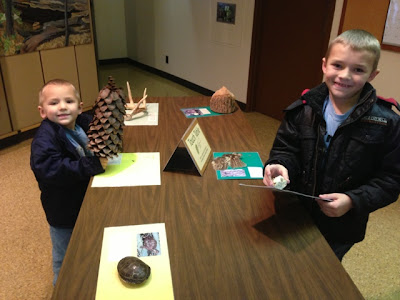 They found wildlife games on a computer screen, along with descriptions of the various components of the park. There were also several live animals to look to view. He also really liked the antler. He would be so excited if he found one of these on his own in the woods. I found these tips on finding shed antlers I'll have to pass along to him. The younger one seemed fascinated with this gigantic cone the whole time we were at the touch table. I guess he has gone to a couple of cone classes recently. 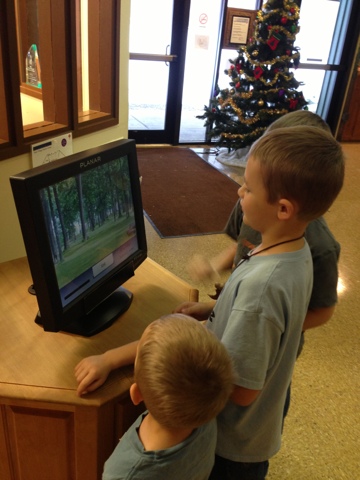 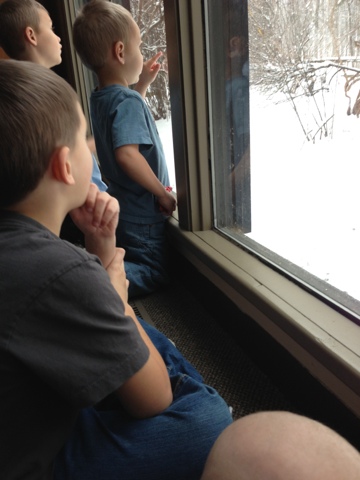 These pictures do not do justice to the variety of birds, colors, textures, and conversations we had at the viewing window. This is when they started talking about what they wanted to do when they came back. Remember those boys who weren't very excited about our trip . . . I talked to Vince, the naturalist at the center, about trail suggestions. He took some time to explain a few options. There is a short PAVED path, which is nice for strollers, wheel chairs, etc. Since it was snowing, the baby was out with us, and we had other places to go today, we opted for the shorter path. It was good to talk to Vince about a few other nature center things as well. 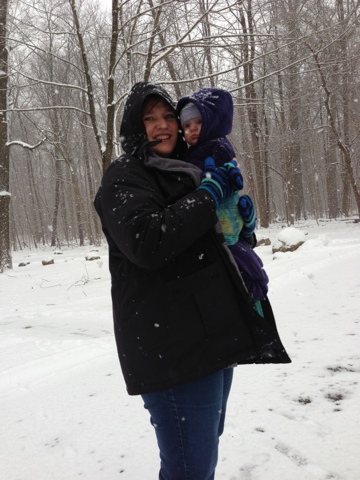 First we had to check out the shelters Vince told me about. My son was really intrigued by these and went back for a closer look before we left. They have an upcoming class on building shelters and other wilderness survival techniques in January:
"January 20th  Wilderness Survival
Be safe and comfortable during all your outdoor adventures by picking up a few tips on wilderness survival. Building a shelter, starting a fire, and finding food are some of the things we’ll practice in this program."

It looks like they have several neat classes on Sundays. Unfortunately, that's a family and church day for us, but they have great options for the nature lover. There is even one on how to make nature films! Okay, they really ALL look interesting to me!

I found their current schedule of classes on their Facebook page. 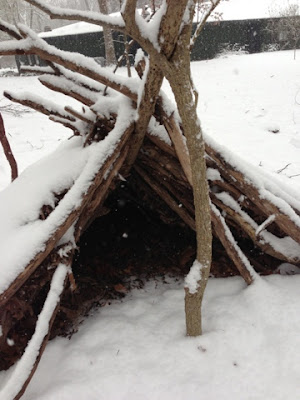 This child has always found places to hide! This was the "shelter" he found. 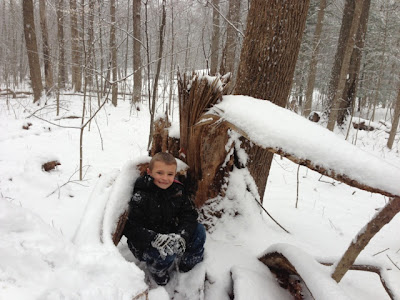 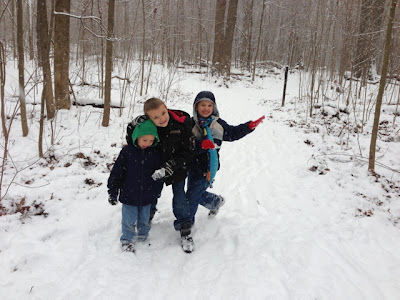 What did I say about him climbing things? He slipped and fell off at first . . . it was interesting to watch him navigate the risk by finding another way to climb that would make it less likely to fall. 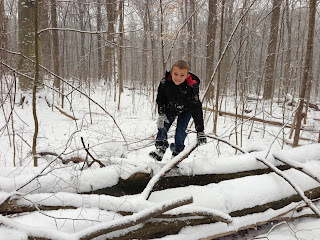 While exploring the Rum Village Nature Center's website, I also found they had a flicker site of photos of wildlife. Great shots! There are 160 acres of to explore, with 3 miles of trails and a large playground. My boys are looking forward to going back!