We checked out the ETHOS Science Center Sneak Peek Science this last week! It was all about THE SENSES! I recently took my son to a Elkhart County Parks program on My Five Senses and often experience nature and life with all our senses. The children were given a brochure with the activities to use as a checklist. The checklist really gave my children purpose in the activities and helped keep their focus on the "special" activities of the night, though there are always the regular exhibits that are enticing.

We started out in the sound room. This involved using a tuning fork and suspending a ping pong ball against the fork after striking it. Playing with the tuning fork was fun in its own right, but "seeing" the sound vibrations through the movement of the ping pong ball was pretty neat! We also experimented with a homemade harp. 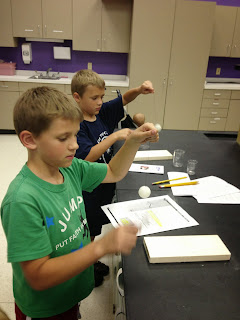 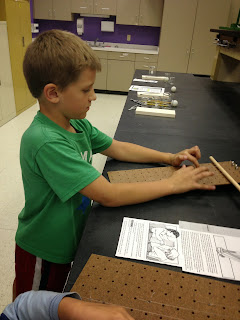 They also experimented with sound vibrations through beans. As they altered the pitch and volume on this machine, the beans started jumping. It must be neat to have access to all this equipment--I guess we do through Science Sneak Peek nights! 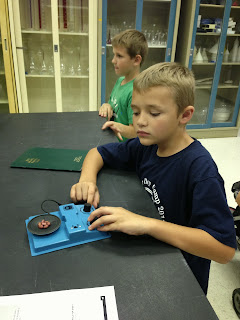 There were also sound mystery boxes--what could they be? Some were easy to distinguish, yet others were a little tricky. The marbles were fun! 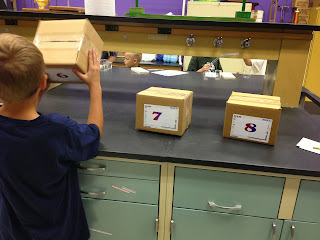 We moved on to touch trying to find the buzzer in these finger mazes only through our sense of touch. I never found it! 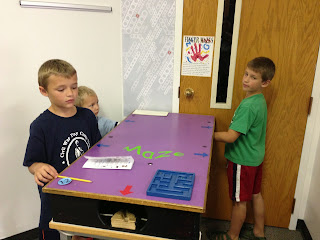 Later we tried to guess what was inside each box just using our hands. This guy immediately new all the natural items, like pinecones. In another area, we also tried to match up something we could see and feel with other items (all the same shape) under a box. 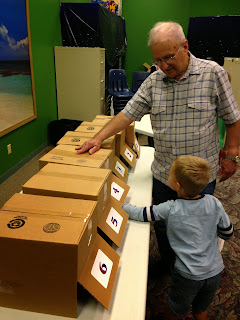 We moved through optical illusions and other interesting activities (like Einstein's eyes that followed us anywhere we moved) to get to the sight room. There were lights set up with different colored filters/screens to make a wall like we've seen at various science or children's museums. This guy has been experimenting with his shadow recently--it's been fun to watch. He also excitedly saw a rainbow earlier that morning. So, rainbows and shadows=perfect combination for this boy! I enjoyed playing with my own moves as well. 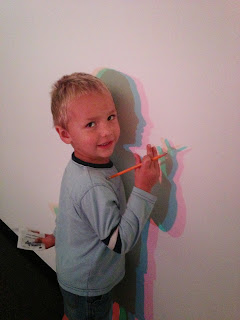 Later we tried out the taste and smell room. We checked out various household kitchen smells. We've done similar activities to this at Nature Nuts (Elkhart County Parks) and Nurturing Acorns (Woodlawn Nature Center) and it's funny that the moms usually know the smells pretty well as they are often doing more cooking with the spices and concoctions than the children are. I've used it as an activity when talking about bats as baby bats can find their mother by smell.

Now comes the really fun part . . . BeanBoozled ! What have I been missing all my life? It reminded me of the Harry Potter candies that came out around 11 years or so ago that you weren't quite sure would taste very good. In this game, you spin the spinner and aren't quite sure if you'll get a "good" flavor or a "bad" flavor. By bad, I mean skunk, canned dog food (yes, the boy's breath smelled like it! Thanks for letting me smell your child's breath!), pencil shavings, rotten egg, and centipede. One of my children was very expressive about the yucky tastes. Another ate all the yucky ones and just took it all in stride as if it didn't bother him at all. He really smelled like skunk! He did throw up the next day on his birthday, so maybe that was payback! 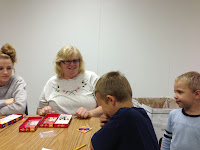 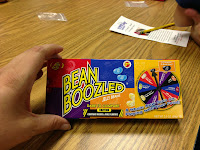 There was an electronic matching activity with Jelly Belly flavors and a salt/sugar exploration area. They make look similar; however, we noticed many differences including the taste! 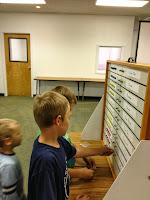 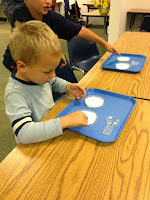 I think we did around 25 different activities for the night! I appreciate the dedicated time we have just for science exploration one time a month (though I heard they'll take a break in at least October and November, but other cool things will be happening like the Science Spectacular and the Lego Robotics Tournament). I couldn't put all that together for $5 for our entire family. Thanks, ETHOS for using great investigative skills to pull together these fun and educational activities! Thanks to all the volunteers too! They give of their time and talents to make this a successful event.

By the way, I stopped by one of the Lego Robotics Tournaments a couple of years ago out at Memorial High School--how cool! My oldest will be in it this year--looking forward to seeing it again this year!
Posted by Carla Gull at 10:24 PM