We have two boys in soccer right now. Yes, I am a Soccer Mom. I really want to think of myself as a Nature Mom, but my reality is Soccer Mom. I guess I can handle that, since the boys really enjoy it.

We have been spending plenty of time at the soccer fields and a nearby elementary school for practice and games. I was intrigued that one of the moms mentioned a pond and natural area near the school, so I went exploring with the younger children while we were waiting.

We found a fruiting tree. 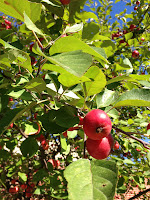 And a pond with lots of great big bullfrogs! There was even one sitting on a lily pad. I thought that just happened on TV (okay, maybe not!). We could look at the plants, the roots, the animals, and more. 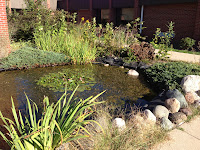 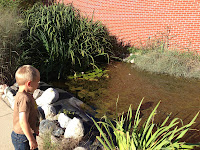 Nearby were different plants, like this milkweed. Look at all the textures on that! There were also a couple of picnic tables which would provide a few options with doing activities outside with a small group or classroom. Now I wonder what they do with the space! I'd love to watch the students and teachers in action! 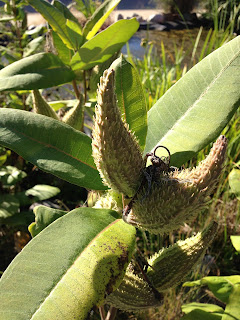 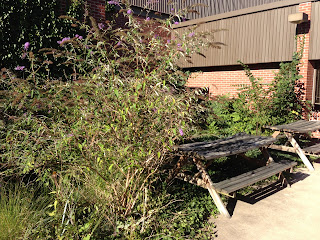 As we walked back, we found first fall leaves on the ground that were perfectly heart shaped. A little boy noticed this shape and the large size of the leaves. He started making a bouquet of fallen heart leaves and looked for the source of such sadness (or exploration--depends on how you look at it). 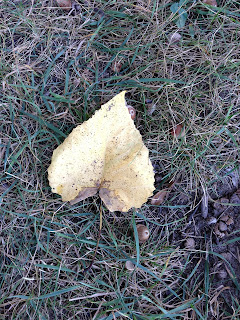 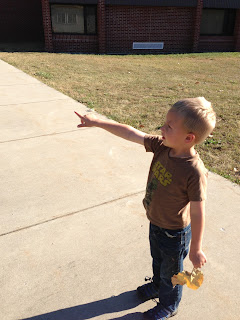 He found it! It was a tall tree with interesting bark! "Mom, this is fun." Win! We often do the challenges at Handbook of Nature Study. During his "fun", I don't think he realized he was learning and exploring! 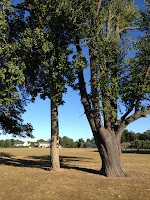 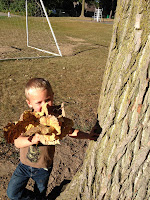 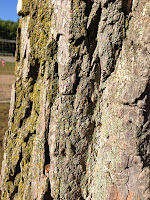 The school grounds also had a small section with shady trees. 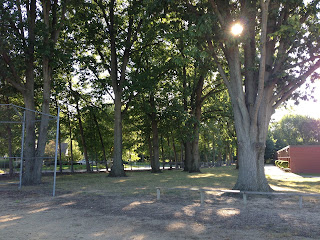 We found several treasures as we walked, like this insect, feather, and POOP! 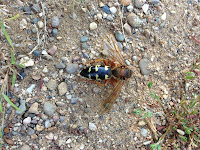 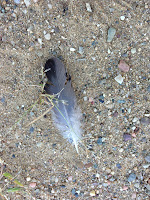 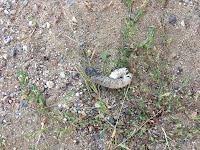 Soon, my nature buddy found something wriggling around. Where did it come from? How did it move? Maybe from one of the acorns? Or from the galls we explored on the leaf stems? Each had a little slit. Some of the acorns were cracked open, too. Then there was some counting, addition, and algebra. Really you say? Yes, I say, as it can be as natural as a conversation. "Can you find as many acorns as your brother's age? Okay, let's see how many there are? Is that how old he is? How many more do you need to make six?" And the conversation . . .  the play . . . the interaction with nature continued. 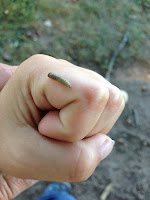 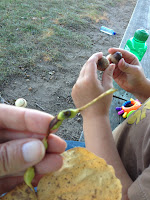 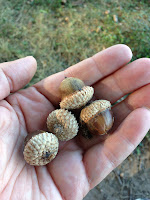 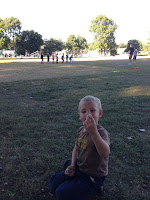 Even the baby got into the nature study, though he was very distracted by water bottles and dirt. We talked about the head, thorax, and abdomen. We observed the legs, colors, sections, wings, and little point at the end. We noticed the middle section was hairy and had legs attached. 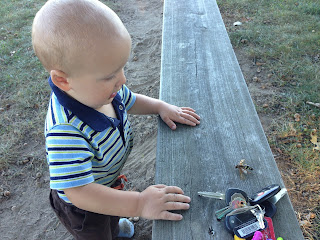 I suggested he find six sticks, too. He got close to it, but then found other uses for the basic toy that is in the National Toy Hall of Fame and a subject of books (The Stick Book: Loads of Things You Can Make or Do with a Stick

) for good reason. I asked him what my rule is when we're hiking for sticks--he knows they need to be shorter than his forearm. That solves many problems with kids holding a stick, turning around without looking, and whacking a kid in the face. So, yes, I allow sticks, but encourage them to use shorter sticks when walking unless we're all working on a moving a REALLY BIG stick. His sticks made music. He made soft noises. He said they were like crickets rubbing their wings together as he rubbed sticks together. He started beating the sticks together and said they sounded loud and angry like a lion. We thought maybe we needed to add sticks to the music and movement basket for Woodlawn Nature Center as he has been helping me fill it with scarves, musical instruments, and more. But, we really need sticks in it. The sticks became tongs or tweezers as he used the two he broke to pick things up. The sticks drew lines, numbers, and letters. They drew shapes of triangles, squares, and rectangles. He also buried one of his heart-shaped leaves in the sand. We talked about camouflage and walking stick insects and the praying mantis. He saw an older boy playing in nature, too, using a feather as a flag sticking upright in the dirt. He did the same. He dug and found a root. We talked about the function of roots and how they help stabilize the plant, bring nutrients, minerals, and water to the plant. 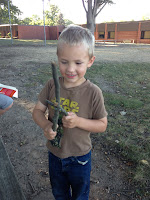 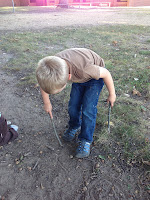 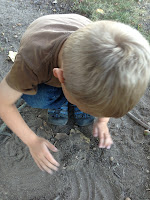 What a great soccer practice! We covered, shapes, letters, sounds, textures, animals, textures, parts of plants, insects, trees, bark, seeds, sound, rhythm, and more. But we weren't "in a classroom", though we were at a school. We were playing, walking, and talking outside. There were no worksheets, no matching, no pencils. We were using renewable resources, found objects, and a little family time. I didn't have a lesson plan. I mainly followed his lead and do what I do best. Soccer Mom. Nature Mom. Maybe a little of both. I'm reminded of the quote by Rachel Carson:

“If a child is to keep alive his inborn sense of wonder, he needs the companionship of at least one adult who can share it, rediscovering with him the joy, excitement, and mystery of the world we live in.”

So glad I get to be that adult in these little boys' lives!
Posted by Carla Gull at 12:47 AM