This last Saturday morning, my husband took the kids to soccer while I went on a bird hike with the South Bend-Elkhart Audubon Society. I recently became a member, though the hikes are open to others interested in birds. I was just at Boot Lake in July while working on a segment for Our Town Elkhart. True to form, I did take at least one wrong turn getting out there--I guess I don't follow my own advice on checking the directions before leaving. It was neat to see the fall changes since my last visit was in the middle of summer.

We took the trail by the gate over to the left as we entered. It took us past the tree nursery, prairie, out to an overlook that is hard to see through the trees, and through the woods to a pier over the water. This let us a see a variety of habitats. Everyone was very friendly and talked amongst themselves as we walked.

There are nesting boxes throughout the area. I saw many frogs in them before. One of the hikers found a turkey feather and stuck it in a tree to delight someone later. 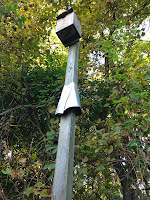 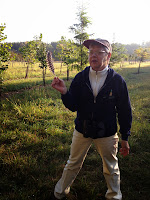 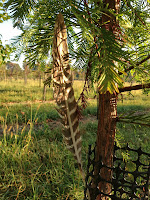 I went on another South Bend-Elkhart Audubon Society hike in the winter in South Bend. There were a few familiar faces, like Scott from Through Handlens and Binoculars. While many of the participants know plenty about the plants as we walked, as a botanist he always has much to offer on the hike. He also often brings a spotting scope and gives people turns as he finds something unique. People bring guide books and apps, along with their binoculars. You can tell a true birder by their binocular straps! :-) I'll get their soon. It's more comfortable to not have the binoculars hanging on your neck.


We walked past the City of Elkhart's nursery. There is a program in Elkhart to plant trees free of charge in the right-of-way or tree lawn. When choosing, be sure to look for native plants, as there are some issues with selections like Bradford Pears, as it is starting to get invasive. Dan Coy, the city forester, is helpful and has walked the woods with us as Woodlawn Nature Center. 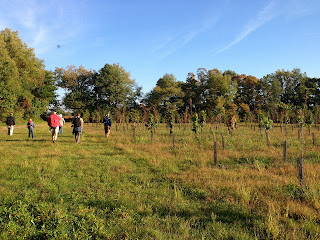 The prairie grasses were tall! We took a look at a New England aster, pointed out by another attendee. 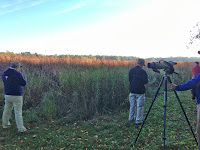 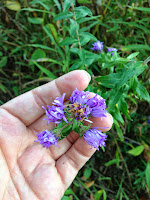 The sassafras and virginia creeper were changing colors quickly. There were also many berries that will provide good food for the birds. 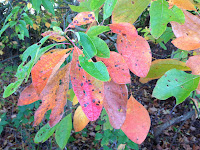 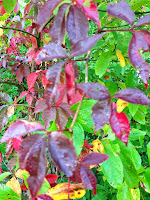 I found this sign about birding at Boot Lake near the prairie edge. While we saw a variety of birds, we didn't catch all of these. 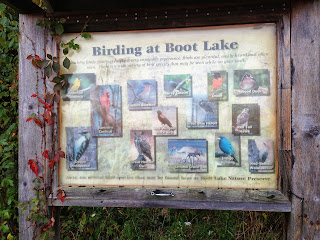 The bright red crabapples were sour! The botanist ate one, so I thought I'd try one as well. Not bad, just sour. We've picked apples a few times in late summer already and will probably get more this week. 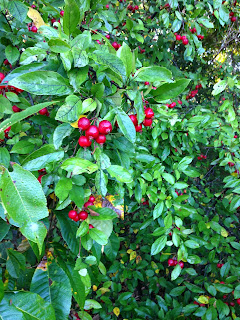 The overlook area here could be trimmed back to be more effective at seeing over the lake, though it was good to pause and chat a bit. 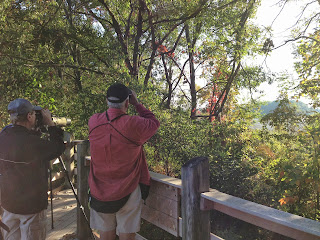 The spice bush is turning yellow and easy to tell by its smell. I learn from the people walking alongside me all the time. It is good food for swallowtail caterpillars. 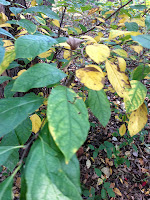 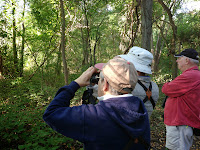 We found a giant cherry tree and had interesting discussions as we figured out exactly what it was, as leaves from other trees were growing near the canopy. My boys would love the branches. 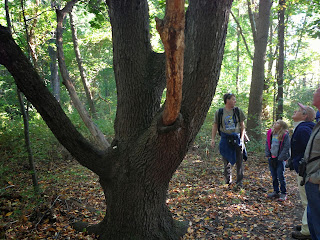 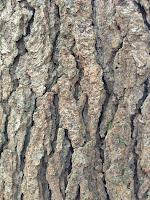 We also saw Indian Pipe, which is parasitic. 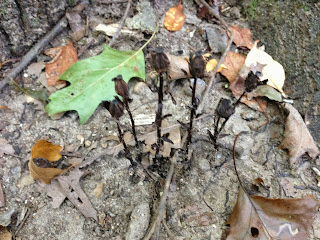 Near the pier, the button bush was looking quite differently than over the summer. 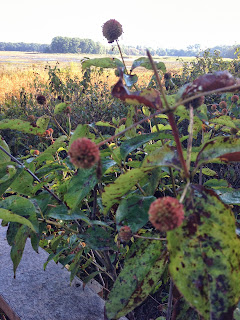 There were various shore birds in the water. I enjoyed watching the Sandhill Cranes come in for landing. We could hear them by the prairie. The next day, I talked to a boy at church who recently started kayaking. He said he really enjoyed seeing these on a recent outing--they were fascinating! Supposedly, Jasper County is the place to observe these during the fall migration. There have been more breeding pairs in our area in the last 10-15 years. My grandmother always tells a story about someone she knew that worked at Notre Dame that said there were no Sandhill Cranes in the area. Glad they are making a comeback! 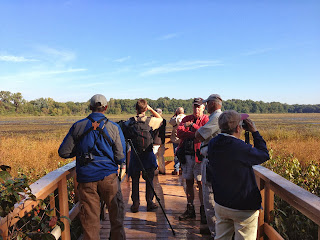 Don't forget the trail map! They joked that it looked like a chicken! 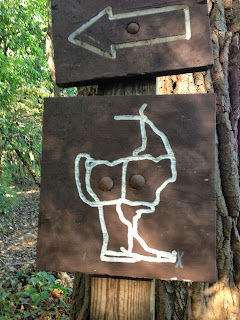 It was interesting to join in the birding again. The discussions mostly centered on birds, though we found frogs and many plants. People freely shared their knowledge and were patient with a newbie. An 11-year-old was the youngest on the hike--she came alive as she started catching frogs. She easily knew the Spring Peepers and Eastern Grey Frog. They talked about the parakeet issues in Chicago at Hyde Park and near the Japanese Garden by the Museum of Science and Industry.

Among the birds we found (I'm sure there were many more that I didn't clue in on) were the downy woodpecker, Canada good, a fall warbler that was hard to ID, flycatchers, either a red bellied or sapsucker, flicker, goldfinch, sparrow, catbird, wood ducks, blue jay, killdeer, lesser yellow legs,
pectoral, and great blue herons.

Another person told me about a place near CR 2 in Bristol and the state line in Bristol that has been a good place to see Bald Eagles recently. It's not far from the house, so we'll need to check it out! Ash trees came up, as well as Arborcare. The Greene School dedication was also a topic of conversation. Thanks for the walk and birding!

I think many were headed to an INPAWS hike later in the afternoon.
Posted by Carla Gull at 11:26 PM