We were driving to a morning activity yesterday and it actually RAINED! We haven't had a good long rain for a bit, so it was interesting to watch out the windows of the Swaggerwagon!

My 4-year-old asked, "Mom, did the sun go to bed?" Trying to figure out what he is asking . . . he goes to bed at night when it's dark outside. It's dark outside, so the sun must have gone to bed as well. As a society, we also use terms that are most likely misnomers, such as sunrise and sunset. The sun doesn't actually rise and set every day. While the sun moves as part of the larger galaxy movement, WE (the Earth) are actually rotating that gives us the illusion of the sun rising and setting. Talk about the ultimate optical illusion! 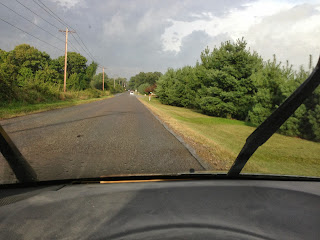 So, we started talking about how the sun is ALWAYS there and always shining. While slowly dying, it is otherwise a constant, whether we can see it or not. We finally saw the sun peeking through the clouds and talked how the dark clouds were just covering up the sun and made it look dark. We talked about clouds and rain and how the water droplets in the air get so heavy they start falling down and get us wet. Since we saw the sun and it was raining, we thought about that combination. Sunshine plus water equals RAINBOW. I scanned the sky, but didn't see anything. Soon after, I hear a nice squeal in the back, "MOM, I SEE A RAINBOW!" Of course, later in the day, I saw plenty of pictures on Facebook of the rainbow in the area. Fun!

It was also appropriate, as he did a rainbow craft at MOPS that morning and was able to play with rainbow lights at ETHOS Science Center later that night. 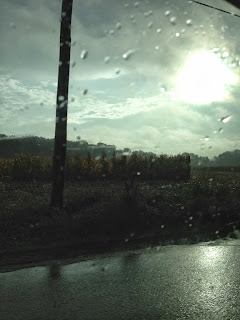 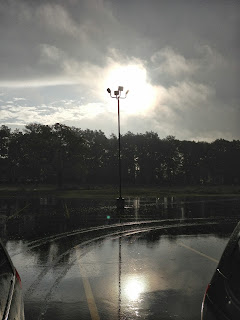 So, rainy day conversations with a preschooler can be optimal science and investigation time. Topics that we discussed included:

This didn't take any extra time out of a busy schedule. Once again, no lesson plans were drawn up. We could see and feel the rain. We made observations and had a conversation, asking questions, formulating ideas, and sharing with each other.

If the older boys had been in the van, I would have let them answer the questions and make the observations. No extra time for a science lesson, just making observations and conversations.