Tonight we stopped by the ETHOS Science Center for their Sneak Peek Science Night. What a great facility and fun activities! The theme of the night centered on their upcoming Summer Science Camps. They have a variety of themes and age ranges for the camps, such as exploring the great outdoors, C. S. I., LEGO Robotics, Marine Mammals of the Arctic, Nanotechnology, fitness fun, a special Camp Invention, and more. Each of the activities centered on hands-on camp experiences. It sounds like they plan to have similar science nights on the third Thursday evening of most months. 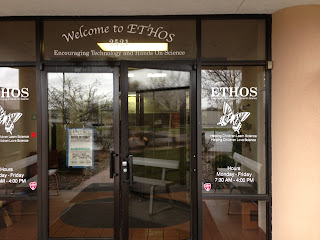 When we entered, we signed up for prizes. We thought it would cost $1/person, but there was a recent donation that covered the costs. Free=Bonus! 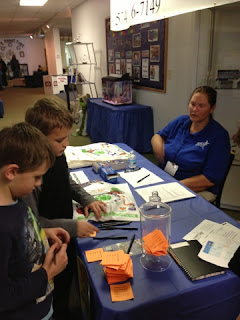 The boys enjoyed trying to get their balloon to balance just level to the table. They enjoyed this and came back to it later in the evening to keep trying! When they have a good challenge, they are engrossed and keep working at it! The teacher at this station is from Riverview Elementary School. I was impressed to hear how much he was helping his students apply their learning and make real life connections. I do a happy dance when I hear of this type of teaching! He modeled great questioning skills and helped the boys discover science in action rather than just telling them what was going on. 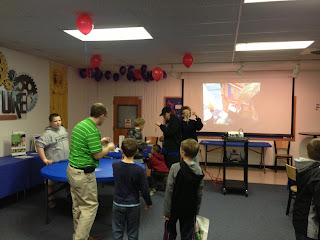 We then visited a room with a hot air balloon in the making! I've tried one of these with my class when I taught in Japan. Fun! 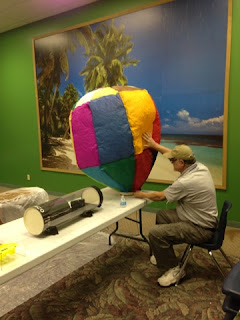 Then we tried alka seltzer and water rockets. They hit the ceiling! I still was shocked each time I saw even though I knew what was going to happen! This looks like it will be a fun camp! The teacher here had great enthusiasm for what he was doing! It was also good to see the use of safety precautions. 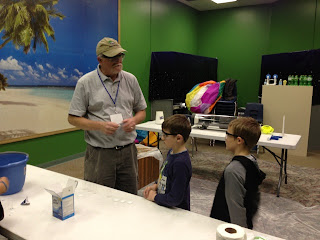 They also designed an arm for the LEGO Robotics

to get the ball in the bowl. My son just started the LEGO Robotics club at school, so was interested in this! It took some adjustments to get it right. Brian who is in charge of this has a great story. He had a set of these robotics as a child and then his class started using them. Now he works with them full-time! He helps set up competitions and get the programs going at the school. I met him at another event and was impressed with his story. 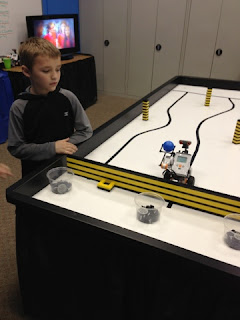 They also painted pots and planted sunflower seeds. There are a few nature based camps available this summer. 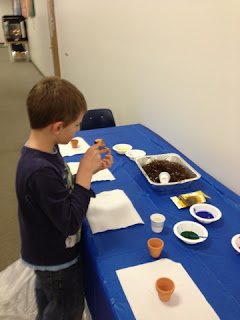 The C. S. I. camp looks neat. The boys stamped their fingerprint on a balloon and blew it up to magnify the print. Then they could see whether they had a loop, whorl, or arch. There was also a lip print investigation, but my son turned up his nose when he saw the lipstick. 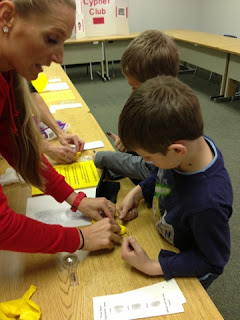 We talked space and made a satellite at this station. This teacher works at Memorial High School. We chatted about the neat activities they had in conjunction with the Science Fair earlier this year at the school. My son was excited to eat his marshmallows! 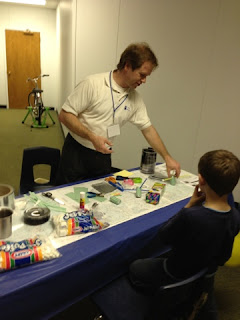 I've seen neat projects with roller coasters in the past. We even have a pretty cool marble run we put together, but the inexpensive cost and ability to see cause/effect and so many scientific principles really makes this option with pipe insulation a winner. He stayed here for quite some time while he added more to the roller coaster! 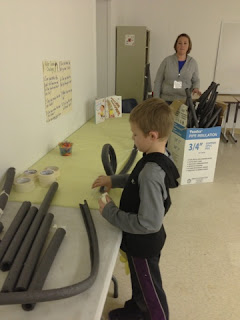 What a great night! It was a great alternative to rained out baseball practice and enjoyable on all levels. I look forward to more of these.
Posted by Carla Gull at 8:52 PM