We started up Nurturing Acorns, a nature based preschool program at Woodlawn Nature Center, again this week. Our topic was dinosaurs and fossils. We started by making cute little dino hats. Simple costumes like this can be great for little ones to explore nature and engage in animal play. Watch for a post on animal play soon! See it from the back here. We used this basic tutorial from cutting tiny bites, yet just used a stapler instead of glue. Additionally, since we have so many two-year-olds in our group, we had many items precut. Older children were welcome to cut their own and change it up. Each tail ended up a little different, which is always nice! We also had some literacy activities, with letter rocks, alphabet sheets, and dinosaur words. 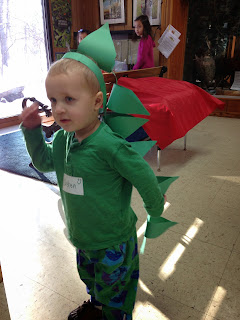 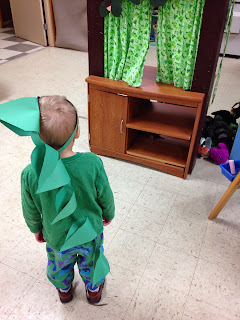 The younger ones needed a little extra help, yet they were great at operating the stapler. :-) 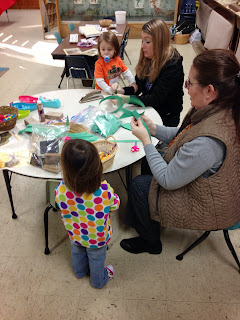 For story time, we used several songs, action poems, and rhymes I've collected from the Internet on dinosaurs (stomp, stomp, roar, roar); investigated fossils up close, held dino bones and part of an egg; and more! We also talked about how something becomes a fossil. I always tell a little story, with a dinosaur that dies while getting some water. He gets covered up with dirt, mud, and sand over time. I use layers of cloth to represent how the animal gets covered. I have all the kids close their eyes and count forward in time, while I switch out the plastic dino for a plastic skeleton. This group figured out my secret, but I've seen others in the past trying to recreate my magic--it's so cool to see them speed up the fossilization process of water seeping through the bones and depositing minerals that eventually turn the bone into fossil. 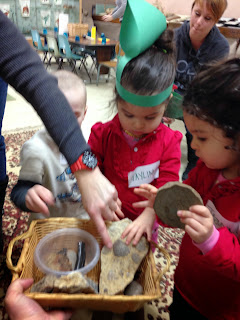 We also did a dinosaur/not a dinosaur sort. If we look at the true definition of dinosaurs, they were vertebrates with their legs directly underneath them that were land dwelling animals living about 150-230 million years ago. With that definition, the children did really well at distinguishing which were dinosaurs or not. It was a little hard to think of some animals such as the pteranodon or elasmosaurus as not being a dinosaur, even though they lived in the same time era. Also, as an FYI, there is no fossil record of dinosaurs in Indiana. It appears that Indiana was most likely covered with water during this time period. There are great fossils, such as crinoids, horn coral, and trilobites from our area. Woodlawn Nature Center has a fairly good collection of fossils--check it out! 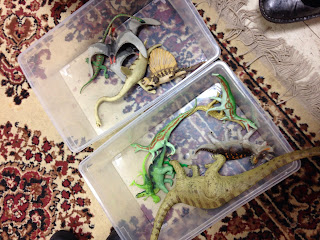 We also talked about paleontologists tools and looked at some examples of tools that might be used. Children are always impressed with a rock hammer! :-) We also looked at a little vocabulary, using these free printables as our base of words. A coworker mentioned these help her use good vocabulary while working on these topics as well. 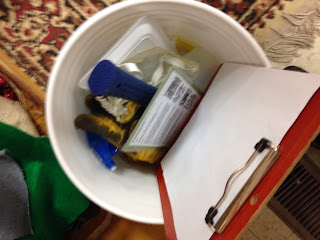 Later we went on a fossil hunt in the Nature Center. We saw mastodon ribs, mammoth bones, horn coral, fish, plants, trilobites, brachiopods, and many more! We also stopped by the dinosaur digging cave. The kids could stay there all day digging for "fossils" and other treasures in the sand. Later, we came back to explore dinosaurs and other items preserved in ice! We had a few tools, salt, and googles to protect our eyes. How fun to watch it melt and find the treasures! 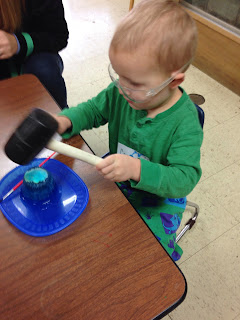 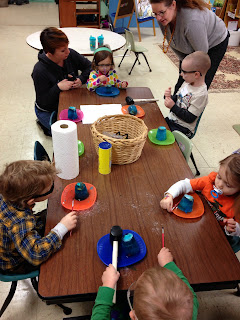 We usually go outside, but it was less than 20 degrees that day. We pulled out the scarves and shaker bottles, put on some music, and did some dino dancing inside! After washing our hands, we "dug" for dinosaurs (fruit snacks) under some dirt (pudding and crushed up cookies). We don't always have sweet treats, but do from time to time. It was fun to dig for dinos! 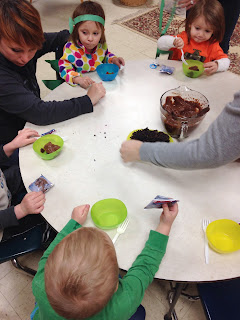 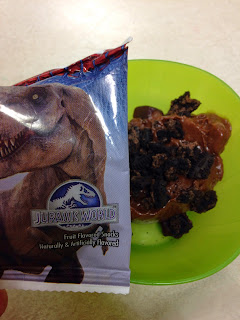 Later, we had free exploration time, with several areas to explore. I loved watching how the children interacted and made sense of what we talked about with the dinosaurs and fossils. Some made tracks in play dough, made a dino scene, or sorted dinos by size. 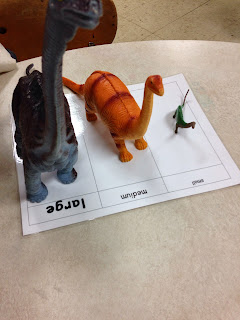 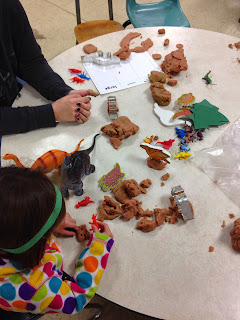 Others dug for dinos and other fossils in the sand tray. There were buckets, brushes, a mirror, rocks, dinosaur parts, small dinos, a sifter, etc. I just used a big drawer I bought at ReStore for about $1.50 on half off day--I love those! We also had a sensory bin full of all things dinosaurs! What great fun! Puppets were also out, as well as fossils on a scope up close and the other engaging aspects of the Nature Center. 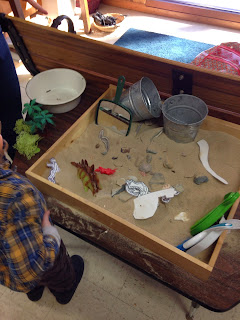 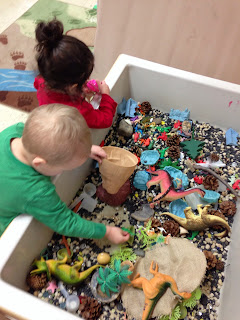 Shared with Outdoor Play Party! Wish it had been a little warmer to be outside more!