We had such a fun exploration at Nurturing Acorns, a preschool nature program at Woodlawn Nature Center, this week. The kids had not seen each other for a few months while we took a break and there were several new faces.

We started with a chocolate play dough that smelled divine. The children were recreating dinosaur themes, making nests, eggs, and more. They learned about dinosaurs through their play. As they played, we talked about what scientists have discovered about our possibly feathered friends. 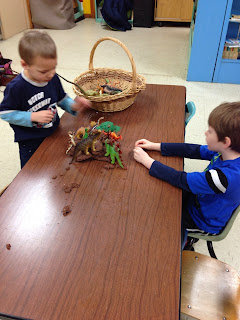 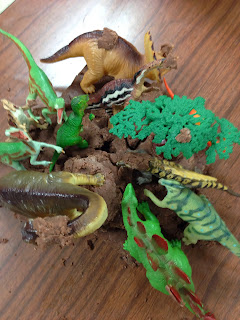 The laminated play mats made a great addition! While these children were working on play dough, others chose to play with dinosaur puppets or other activities. 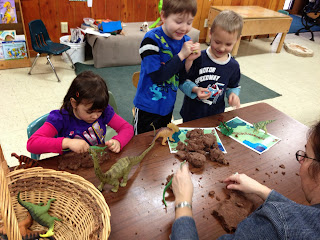 During story time, we read a fact and a fiction book about dinosaurs, looked at paleontologists tools, explored fossils, and had some fun acting like dinosaurs. 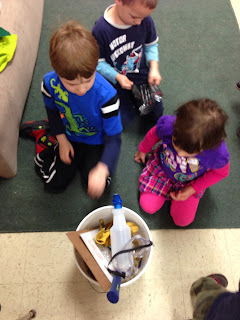 Outside, we went on a dinosaur hunt around the nature center, finding all kinds of dinosaurs! Even though there is still lots of snow on the ground, it was nice to get outside and explore a bit! 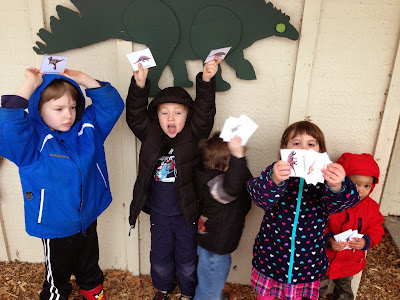 At snack time we had dinosaur eggs and dinosaur bones. Yum! 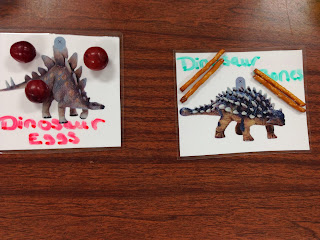 This ice block of dinosaur bones and fossils was a hit! 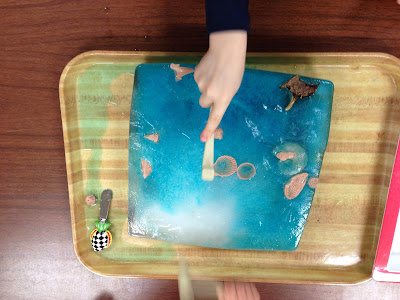 The children tried putting salt on it, chipping away at the ice, and exploring with water. They discovered many fossils! What I really liked was when I introduced clipboards, paper, and writing utensils. We talked about how paleontologists measured and recorded their observations. The children did, too! 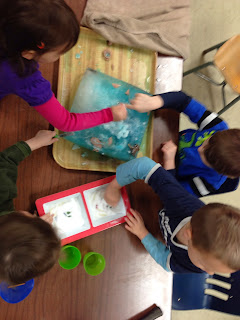 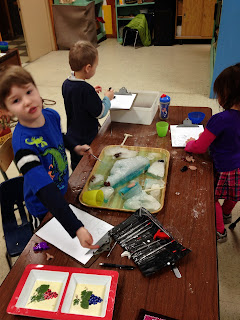 Others were exploring the sensory bin or putting together big dinosaur puzzles. 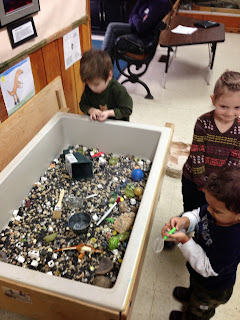 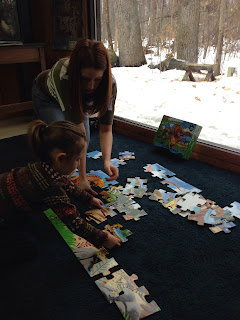 They also explored a dinosaur scene. 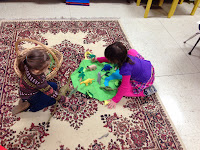 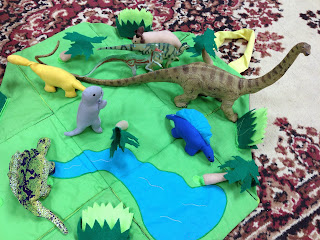 They measured their feet against a dinosaurs track. Things that made this a great program:
1. We allowed the children to interact on their own level. Some were a little shy and took some time to warm up, but they eventually did.
2. The children had choices and options about what they wanted to do. There were many things that were not used as they found something else to discover.
3. We interacted with the children and shared information as they played. They asked questions, made observations, and shared what they have learned about dinosaurs. They recorded their observations.
4. The children could scoop, dig, pour and more. They were actively involved in the learning and exploration.
5. Many senses were used--they could smell the chocolate, run their hands on the bumpy fossils, feel the cold ice, taste the "dino eggs", and see a real dinosaur egg that was fossilized  over time. They said it felt like a rock!
6. Parts were directed by the teachers, like story time and our hike; yet, there was also plenty of time to explore and interact. 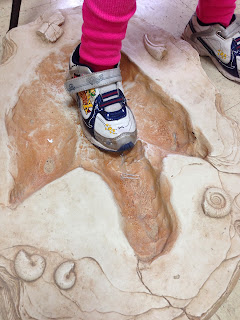