I had an extra dollar, a little time, desire to do a little Spanish refresher, and curiosity about Merry Lea's programs, though the program was hosted at Shanklin Park. El bosque encantado (The Enchanted Forest) was a little closer to home and on the way back, I could stop by my grandparent's house. I wish it were a little lighter out as my grandfather said the fall colors are gorgeous right now. I went to the Spanish speaking version of the program, though they have English speaking versions of The Enchanted Forest down at Merry Lea next weekend. 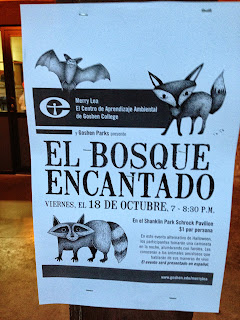 There were several things I liked about the set up. There were treats on the table, drinks available, apples, and coloring sheets. Live music was playing in the background. There were several people there I knew. I felt welcomed. My apple wasn't perfect, yet I knew it was hand picked with care and completely LOCAL. It was quite tasty. 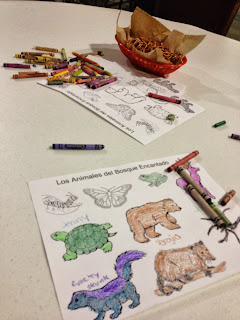 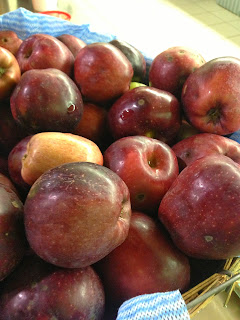 While we listened to the music and chatted, we waited to hear our number. Each person received a small slip of paper to let them know which group they would be in. I liked how they organized this and had entertainment while we waited. The tour guides are part of a Latina service club at Goshen High School. What a great way to be of service and use Spanish skills! The program also reached out to the Spanish speaking community in their language. What a way to meet people where they are. They also did the program off site, bringing it closer to people that might attend. It was simple, yet felt like community. 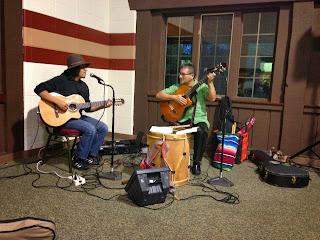 We were guided by lanterns to various stops along the walk. At each stop, a new animal in full costume greeted us in Spanish and told us about its unique characteristics. They used the opportunity to share about animals in a playful way. 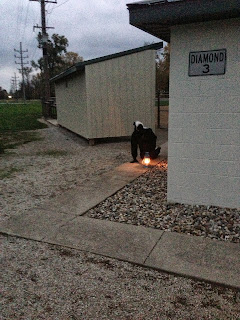 To help myself remember (Spanish practice, right?):
skunk--seems like common usage of zorillo (meaning little fox) is different than what many of the dictionaries call mofeta. The zorillo showed us what he does to keep predators away--stomping his feet, hissing, and then later lifting his tail.
deer--venado They eat pasto (grasses/pasture) and hojas (leaves). Their antlers fall off each year. They can swim. They might scratch their antlers on trees in the winter.
Garden spider--arana de jardin (I need to refresh my memory for the special marks on letters!) It is an aracnido (arachnid) and has plenty of eyes). It is a predator and might eat butterflies. It spinds webs (telarana)
Monarch butterfly--mariposa monarca It is an insect. It drinks nectar.

They compared butterflies and spiders. They both lay eggs. An insect has six legs, while a spider has eight. The spider has 2 body parts and the insect has 3.

turtle--tortuga This is a reptile.
frog--rana This is an amphibian. They like to eat flies and other insects. It's not to be confused with toads (sapo) and the question about causing warts is a myth.

bear--oso They don't eat humans, but berries, insects, fish, and other things they can find as they are opportunistic.
opossum-- zarigueya These have a pocket and are the only marsupial in North America.

The Spanish speaking varied by the animals, yet I give them kudos for trying while others were native speakers. They obviously studied their animal, related vocabulary, and thought about how they would talk to others about the animal. I also found there are differences between words in different areas for the animals. 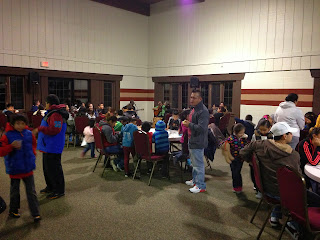 It was a full house! Thanks, Merry Lea Environmental Learning Center of Goshen College! If you'd like to learn more about animals, experience community, and get outside, check out their Enchanted Forest next week at their center down near Wolf Lake.
Posted by Carla Gull at 9:00 AM