Last night, my husband and I went with the youngest two kids to a Dutch Oven Gathering with Elkhart County Parks at Bonneyville Mill County Park. This is an annual gathering. There are two options for participants. You can either cook/demonstrate or pay $3 and "observe". But we didn't just observe! Courtney, the interpretive naturalist, spent about 45 minutes or so going over cast iron basics. It sounds like he is a bit of an afficionado. He has been a part of the International Dutch Oven Society in the past. His mother also knows of his love for cast iron cooking and picked up any piece she found at garage sales, plus bought him new sets other places. His wife finally had to say enough is enough, though I'm sure a piece sneaks in here or there. 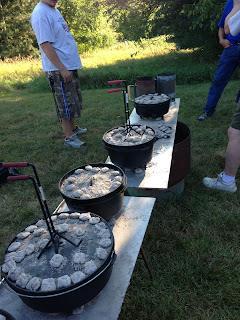 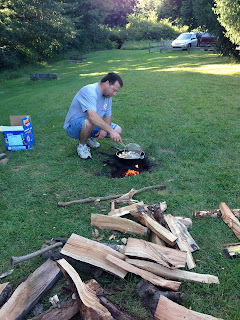 As observers, we had a snack of cinnamon rolls and kettle corn to eat during the presentation. The tables were lined with cast iron pans--from ableskiver pans (and many didn't know what these were) to cornbread pans and dutch ovens. In our packet of information, we looked at pan choice, seasoning, cleaning rust off, recipes, temperature charts, and more. Courtney talked about pan choices and mentioned that Wetzel has removable legs that make it easy for storing. I know our legs often poke through the box, making it harder to store. People mentioned several brands. Many really like the quality of Lodge

(often preseasoned now), others really like the Cabela's brand, and others don't mind any. 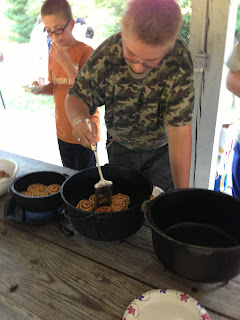 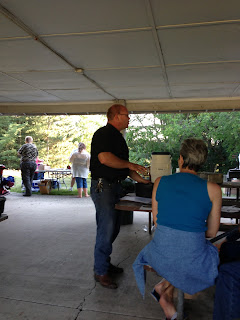 Nearby the babe with no clothes was exploring his baby sized pond. :-) We'll call it early nature explorations. 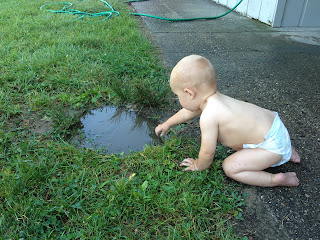 There was a good gathering for the event. When we signed up, it sounded like just a few; however, the shelter was pretty full, plus there were all the people cooking outside. It was "family friendly"; however, I am glad that our oldest two were not there. Some kids were playing with balls outside the shelter, and I'm sure the oldest two would have been doing that; however, it was nice to not have that layer of distraction. Next year we might bring them along since we know better how it was set up.

looked like a great way to have easy clean up and be able to cook some foods that would be difficult to make otherwise. I noticed others cut circles out of parchment for the bottom for specific recipes like shortbread. A few other tools that I saw as helpful were the lid lifter

, and various other homemade helps to get going. One man wanted to quickly remove and cool his shortbread (which was delicious!), so he cut two wooden circles. He made one with legs to help with the cooling. This worked great to quickly remove the shortbread. I would suspect a Lid Stand

would be helpful at times, too. I know it's been hard to keep the lid clean when checking on what I'm cooking in the past. 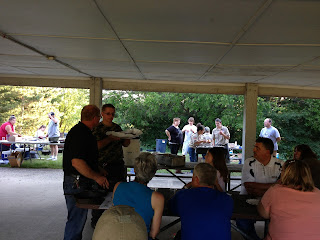 Cliff Rivers and family had a serious cast iron set up. They had a display of books and pans, several tables, for prepping and serving food, and a unique way to cook on top of a large piece of scrap metal. They had a packet of information as well. It included several articles about dutch oven cooking, as well as many of their favorite recipes. It was another great resource--thanks for sharing! Several families were also cooking. Boy Scout Troop 31 from Bristol made lasagna and a pudding cake. They seem to be regulars! Maybe my husband will need to bring his Scout troop next year. 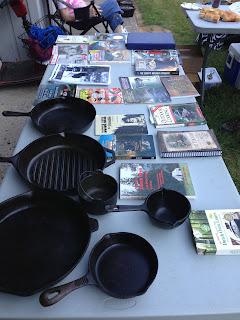 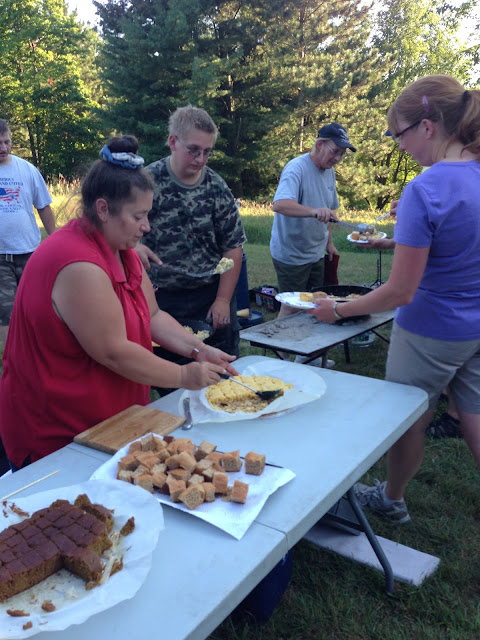 We were able to sample the various dishes participants prepared in their cast iron ware. One family made donuts over an open wood fire. Another made a blackberry cobbler. There was a mountain man stew, shortbreads, breads, pumpkin brownies, tater tot casseroles, corn casserole, and more. What a meal for $3! We weren't sure if we'd be "sampling" as observers, but I'd say this was a delicious dinner and inexpensive date!

I also enjoyed meeting new people, learning tips from people regularly using their cast iron cookware, and spending time with my family. I highly recommend the gathering if you cook with cast iron, use it here and there, or are even just curious about it! Maybe next year, we will be cooking our own recipes. We're making plans for using more cast iron at home on a regular basis and looking forward to good recipes on Labor Day weekend! 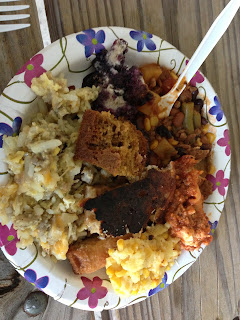 A raccoon even came to try out the kettle corn! They seem to frequent the shelters at some of the parks. 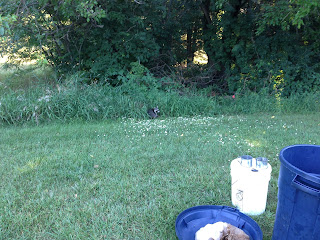