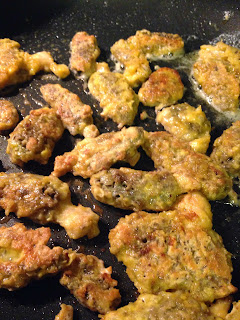 Earlier this spring, a friend took me under his wing to learn about morels. We went in late April or early May, before the big rush appeared. We only found 5 while we were out that day, yet he was able to share his MANY years of experience morel hunting with me.  He lives over in LaGrange, so took me places he knows, like Mongo Fish and Wildlife Area and the woods near his house. He told me stories of hunting the woods with his family as a child and a special time hunting with his aging father in a patch closer to the road. My friend grew up with morel hunting as a way of life and has only missed a few seasons in his 70 years.


He was cleaning up some mushrooms for later, so I helped with the process. He typically cuts the morel lengthwise, exposing the inside of the mushroom. He then soaks them in water to remove any dirt or bugs that might hide in the creases, gently drying them off and letting them rest on a paper towel.

My friend took one look at my feet and offered me boots. I guess Keen Sandals doesn't cut it for morel hunting. It was still early Spring, so very little growth yet. I stuck with my sandals, yet knew I would need better shoes (hiking boots and/or waterproof boots) the next time I went out. He had a walking stick and bag for me as well. The walking stick was VERY handy. I could move stuff around on the ground without bending over and it was handy as we walked up and down ravines. Mosquito repellant was also handy.

My friend taught me to scan the area, though the morels really can blend in very well with the backdrop. It was super exciting to find a few, even if the first ones were a bit guided. There are usually others nearby, so once we found one, we'd always keep looking for more in the area. Every time we found one, we had to have a "chaching" sound to celebrate and announce our find. I'm sure it would help keep the boys occupied and interested. He said to go hunting after a warm up that follows rain. There are special place the many morel hunters look for--near the base of ash, elm, sycamore, apple, and tulip poplars, though they can be out in the open as well.

Some people use a knife to cut off the morel, but my friend told me to just pinch the mushroom off with my fingers, trying to leave any debris behind.  It's important to clean the mushrooms as we return home, too. We walked, walked, and walked some more. It can take a long time to find morels. Sometimes they will be there and other times they will not. The joy is in the journey, and we had a great time exploring nature on a drizzling day. My friend had gone picking in rougher terrain the day before and had some to gift me if we didn't find any. Knowing how much time it can take to find them and how much they cost, I knew this was a special gift indeed. He does this with his siblings and a few other friends. How generous!

Back at home, my Master Chef Junior wanna be boys were excited about the prospect of morels. None of us had even tried them, so we weren't sure what to expect. My friend says he just sautés his after dipping in flour and adds salt and pepper. We tried these a few ways after cleaning and prepping the morels. We looked up a few recipes online.

One recipe suggest dipping in egg and then a seasoned flour mixture. We did this for some. 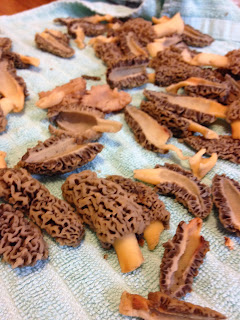 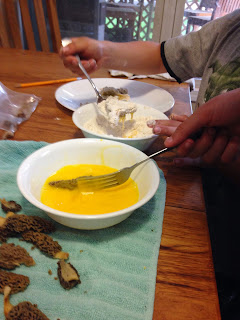 We then pan fried these in equal amounts butter and olive oil. We were going for crispy outsides and tender insides. We got what we wanted! 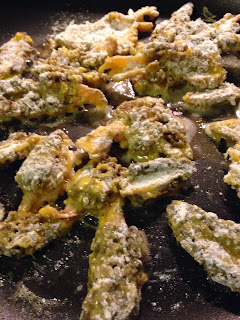 We paired them with cheeseburgers and some veggies for dinner. Delicious! We'll be looking for morels again. Here is a walk when we went looking for morels, but didn't find any.  It was still a perfect day to be out and I loved that time with the boys outside building memories.  To this day, whenever the boys hear about Morels (like on Master Chef), they get excited and are sure to share what they find!

We thought they were delicious and everyone tried them. We could definitely get addicted! 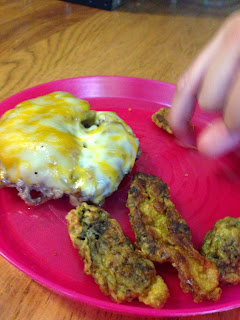