Finding Nature While Hunting for Morels

A good friend took me morel hunting the other day. It was a great way to get outside and a tasty treat later. He shared a bag of morels to take home. After frying them up with the boys (see the blog post here), the middle two were very interested in finding more. Since it was later in the day, we just went to our nearby nature stomping place (which my 6-year-old said was his FAVORITE--glad to hear it! It reinforced my thought that we all need a quick, go to nature spot.). It's a preserve, so we weren't looking on keeping the morels, but to see if they were up and if we could actually find them. They blend in so well!

I'll go ahead and tell you we didn't find the morels, but we had a great night exploring! We scanned the ground as we walked. They blend in so well, it's hard to tell they are there sometimes. Once we passed the meadow and entered the woods, we happened upon a dead raccoon rather quickly. It looked like squashed fur, bones, and a tail. Yes, this is really cool to a passel of boys! Aren't you glad we shared this right away? 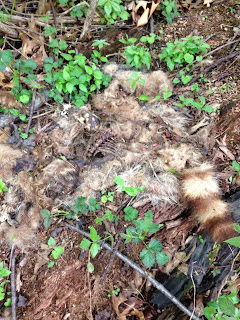 We had followed a smaller trail around the pond in the woods. It might look like an animal path; however, there was a bench along it, so we felt legit. There are several large trees that are down, which make a perfect place for climbing. In the following pics, it's hard to tell but these are several feet off the ground. They have to bend, twist, grab, and challenge themselves to get in these spots! I love watching them figure it out and then the feeling of triumph as they tackle something challenging. Our children need to learn to negotiate risk and to rise to the challenge of difficult situations. Nature is a perfect spot to do that! 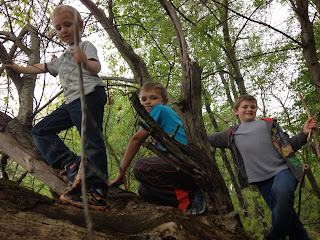 Remember that look of triumph? These faces show it all! 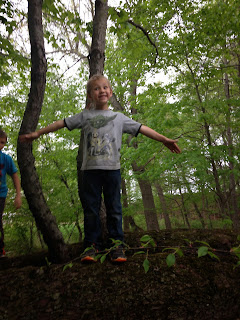 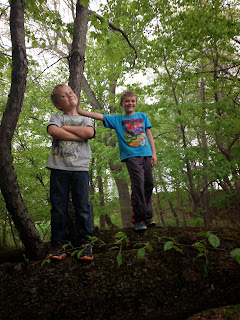 One child was experimenting with the tree stumps. "Mom, it crumbles!" We could see nature recycling through the raccoon, the crumbling wood, and the decomposing leaves on the forest floor. 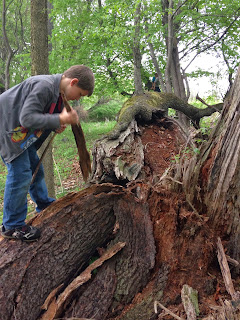 Notice the plant with the white flower in the front of the picture? That's garlic mustard. This young man is a great garlic mustard slayer! He knows the plant and actively helps clean it out as we go places. I know it's a preserve, but I'm pretty sure they don't want garlic mustard taking over the place. We'll do our part. At the moment, though, he was trying to catch this toad. When something moves, it becomes a  challenge to catch it. Of course, we just look for a few minutes and then put it back where we found it. 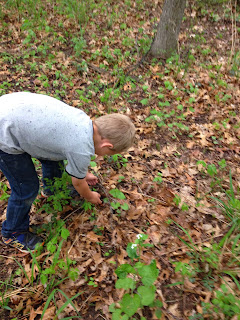 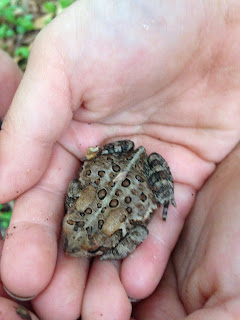 My other son found a baseball glove he was proud of. "Mom, take a picture!" He pointed out the moss growing on it, too. 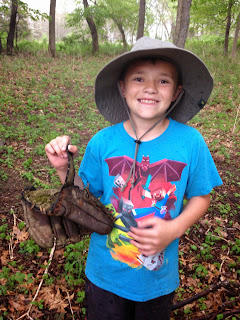 While we didn't find morels, we did find other mushrooms! 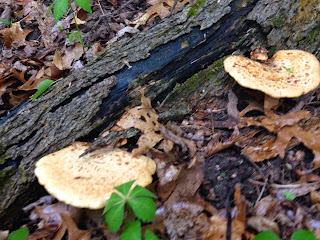 We also found interesting cracks and crevices. You never know what you'll find in these! 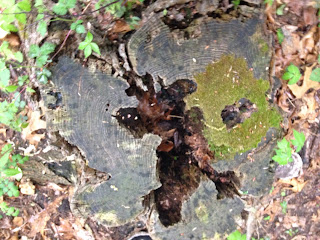 At one point there is a big hill, with a ridge along the top. I didn't go up it, since I had a heavy 2 1/2 year old in a backpack carrier (love that thing!); however, the other boys accepted the challenge and took a picture of the cables and meadow above. Coming down, they needed to use different skills, bending lower and holding on to smaller trees as they moved. Walking sticks are nice in areas like this. I haven't been using mine, but brought it along--it really was nice to have and wasn't much more to carry. With all the boys, the backpack carrier, etc. it seemed like too much to bring, but it was helpful to have. 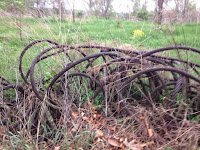 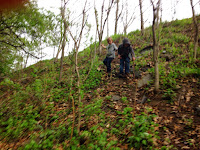 This tree was downed--making it a perfect fort! Before we even made it there, the boys thought it was a fort. :-)

More trees and branches to climb! The boy on the left got a little scraped and wasn't happy. He had his moment and kept going. I've come to view a scrape as a sign of "I took a challenge!" Our bodies are meant to heal. I find that if I don't make a huge deal of the scrape, the child doesn't either. That doesn't mean we take unnecessary risk, but recognize that a scrape might be part of the adventure. I know I got scraped up a lot as a child, even having a huge heart shaped scab on my elbow one summer. We heal! 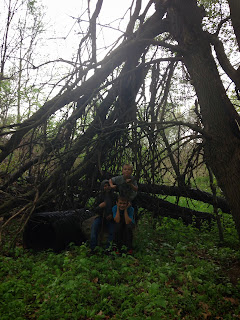 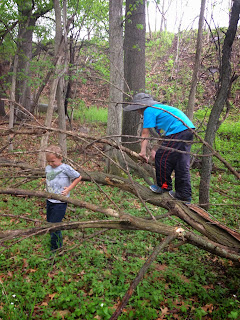 "Mom, I think these are termites!" I'm not sure what they were, but they were focused, observing, and making hypotheses! Spending time in nature allows for that inquiry. There were a few lovely Mayapple  colonies in the area, with some growing over the path. I "believe" this child actually picked this plant. I don't advocate picking plants like this, especially in a preserve, but we used it as a teaching moment. We talked about where we were, why it's important to leave the plants intact, etc. He now knows there are some plants that we really should pick (invasives, like garlic mustard) and others that we can really harm if we pick them. While "nature can take it" (inquiry of children), we can still teach our children good etiquette of the various places we visit. And, no, he didn't pick anymore. Of course, he had to use it as an umbrella, as I always call them fairy umbrellas! 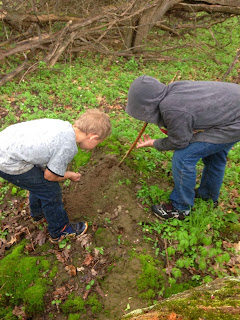 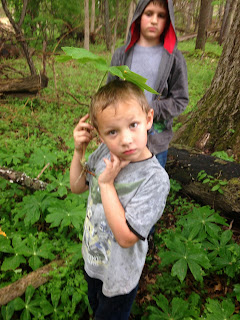 Of course, another hole in a stump to investigate. We were close to the pond at this point. It's nice to have varied habitats at this preserve. 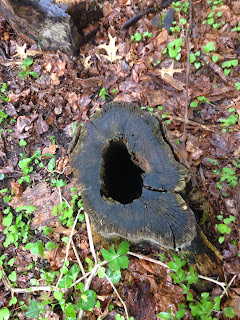 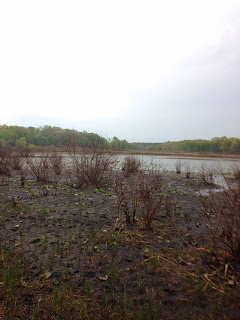 They found a wood frog nearby, all work together to catch it for a minute before letting it go again. Someone was very proud of his spiky hair! 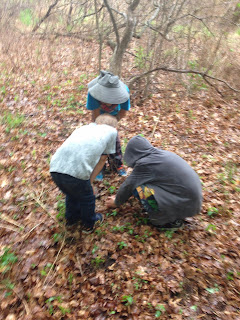 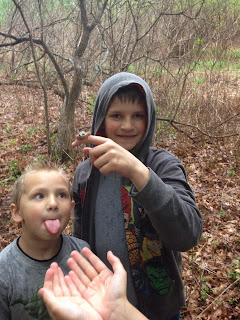 My son showed my all the hitchhiker seeds that decided to go for a ride! We also explored the edge of the pond. This time, my son asked, "Can I pick a lily pad?" I liked that he asked, so I knew we were making progress after the Mayapple. I politely declined and we talked about why we want to leave those there. 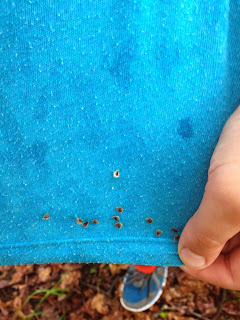 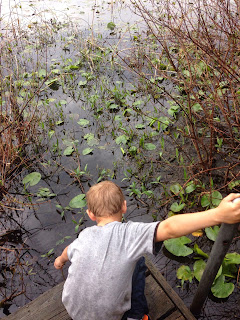 Heading back to the car, we found a nest and emerging leaves. 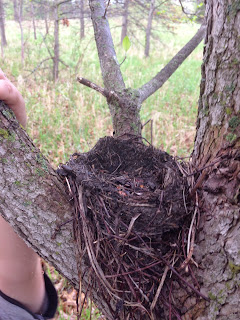 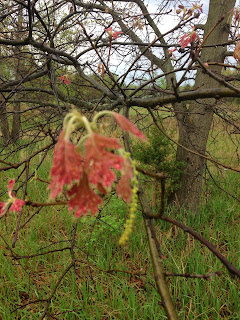 We also found a blue egg in the path. We knew it was no longer viable, so I allowed my son to investigate it more, as he'd asked what was inside. He carefully cracked it open, using his Master Chef Junior skills and saw it was just like a chicken's egg. He carefully placed it in the crook of a tree in case a raccoon, skunk, or opossum might want to eat it. 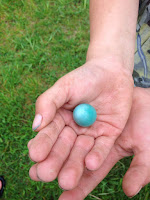 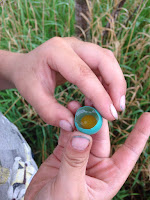 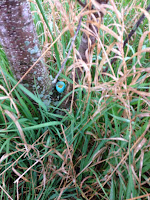 We explored the yellow blossoms in the meadow as we returned. We also smelled the lilacs at the entrance. Lovely! As an addendum, my oldest (age 10.5) took off while we were still by the pond. He knew where the car was, the area, and what he should do if he gets lost. He had a soccer ball with him to keep him occupied. This was an appropriate time to allow him a little more independence. I actually really like this area to do this as it's all one big loop with a couple of trail options with one parking area and few people there. As our children get older, finding small ways like this to allow independence is important to making good choices later on in life. 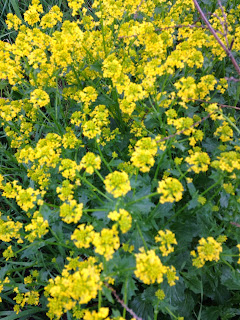 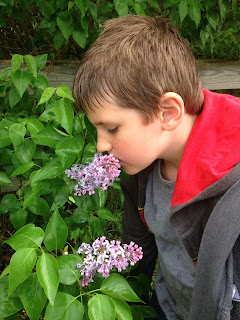 Happy Mother's Day! I hope you find some time to explore with your children or others nearby. While we had a nice hike doing a little bushwhacking, it may be looking out the window, exploring flowers in front of the house, or taking a walk in the neighborhood. Have fun getting outside! For us, the "hunt" for morels led us to a fun evening outside exploring nature!

This post was shared with Outdoor Play Party! Great stuff there!
Posted by Carla Gull at 9:57 AM