Mom, I Don't Like Nature Anymore: 5 Tips to Stay Connected

Here he is. My self-proclaimed "nature boy"! I started doing a regular nature preschool with him when he was three. He has been my side kick as we explore the natural treasures in our area. He has spent an inordinate amount of time in our local nature center as I attend meetings, give presentations, etc. He brings me interesting items, asks questions, and tells me how things happen in the natural world. He plays in the rain, snow, lake, and grass. He builds things and creates things in nature.

You can imagine how my heart broke just a little when he loudly proclaimed, "Mom, I don't like nature anymore!" Of course, he does have other interests, like drawing over most of our furniture (still working on that!--new discoveries weekly), reading, counting, and even Minecraft with his older brothers. But did he really mean he doesn't like nature? 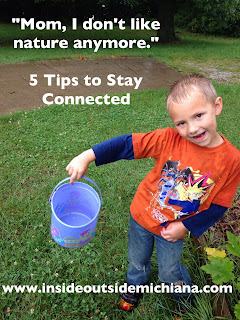 As I thought more about what that really meant, "Mom, I don't like nature anymore", I realized he was really saying, "Mom, I miss spending time outside with you." He started kindergarten this year and we don't have that dedicated nature preschool time. He is developing new interests that open his world a little more, such as reading. We've also had some really cold negative temperature days where we didn't get out as much. Add to that sickness over the holidays and then continued sickness for a few of the boys recently, we really haven't gotten out as much as we might normally.

However, he still is often outside. Given his preference, he often goes out and just plays in the front yard. I peek out every once in a while and see him with sticks, playing with the snow, and loudly proclaiming (in my mind!), "I belong outside!" He needs to be outside. He may not want to call it "nature study", but being outdoors is part of his existence as a human.

The next day was relatively mild and our schedule was not as full. Get that? Too full schedules make it harder for us to get outside. Right after the boys got home from school, we set outside just to have FUN in our yard. We shoveled the driveway better since much of the snow was melting. He's often out there with his dad helping with the shoveling or just playing with the shovel while he is there. Here is a picture of his brother helping as well. He played basketball with his older brothers. With it being warmer, I even said to his older brother, "Yes, you may play outside without your jacket" as he had a jacket accessible and could self regulate his temperature. He did go and get gloves when he needed them. 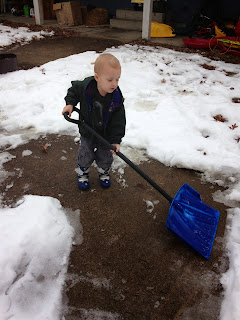 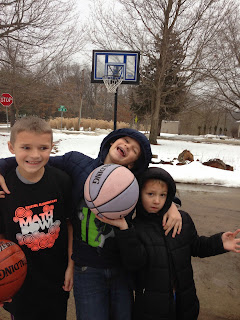 We checked out snow filled deer tracks in the yard and nearby. We imagined what they were doing in winter and how they were surviving. We checked out the brand new playground at the church across the street. Thanks, Eagle Scout, for making that happen! 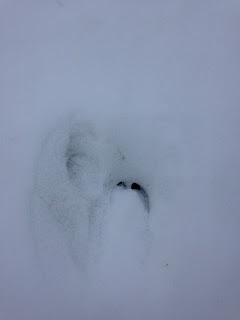 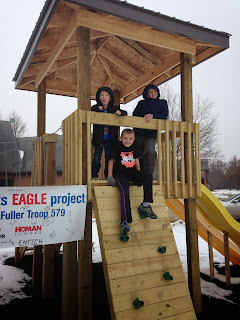 We felt the joy and exhilaration of swinging! 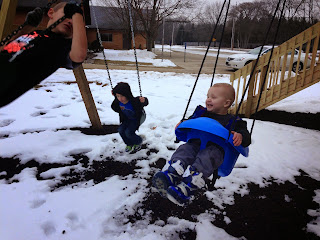 We attempted snow angels in the crunchy snow. We checked out different qualities of snowballs and what formed the best ball. We didn't even have a snowball fight, contrary to the picture, but we did use them as balls, throwing them back and forth cooperatively to see how long our snowballs could last in an impromptu science experiment. 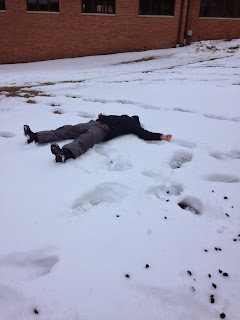 I followed my boys' lead. In my quest for "nature study" sometimes I need to pull back and make sure we are just having OUTDOOR PLAY time. I need to make sure I take the time to spend with my children in this unstructured play from time to time as well, instead of just letting them play outside on their own.

My advice to other parents when their children may decide they "no longer like nature":
1. Remember, that may just be a feeling for the moment. Sometimes I may dislike something momentarily that I really love to do. I just want to express my current dislike and then I like it fine the next time I am exposed to it. My oldest often complains when we're talking about going on a hike. I often will say, let's try it for 15 minutes. When I see him having fun while we're out, I know it was worth it to brush aside some of the complaints and make sure our family is spending time in nature.
2. Take stock in current activities. Are we too over scheduled to take a few minutes to play outside with our kids? I have a lot on my plate as I work full time, have boys' with after school activities, and do extensive community service in natural resources in our area and as a cub master to our older two boys. Taking the time, even if it is short, to make nature play a priority is important. My kids are also involved in after school activities and clubs. When we're over scheduled, it's hard to have time to connect with nature. As we looked at Little League for this spring (which we've done for several years), my boys said they weren't very interested. I didn't push it because I saw that we now have spring Saturdays FREE to go camping and spend time outside! We're already making plans!
3. Make sure we spend unstructured time with our kids on their PLAY turf. I'm not saying we should be a helicopter parent, but it's okay to play with our kids! They need that and want that. It doesn't have to take very long nor does it need to be daily, but making sure we regularly make nature play time a part of family time is important.
4. Keep up the good fight! Electronics have their place and are a regular part of our lives, even part of our nature study. I admit we have multiple devices and our children use them. However, we also try to counteract that with time outside. It may not be a 50:50 ratio, but outside time is critical to our children's development. Just last night I told our older boys that we purposefully paid more to get them Kindles for Christmas that just read stories. We don't mind them using them for reading as much as they want, yet we did not want them to have a personal device where they had access to games 24/7. Making conscientious choices to have some limits on media consumption is something we often renegotiate as a family.
5. Invite friends for nature play time. Just this weekend we started a new Family Nature Club in our area. Getting together with other families and kids outside is a wonderful social opportunity to reinforce and strengthen that connection with nature. My son could share his secret spots, point out animal tracks, and PLAY in nature with other children!

This was shared with Outdoor Play Party. Look for more great ideas on getting outside through these great bloggers! :-)
Posted by Carla Gull at 9:56 AM