We braved the cold to get in on snowshoeing while we still had plenty of snow this last Saturday. We had all our kids and 2 cousins. Thankfully we had a deal through Wild Wednesdays for half of us. I only went snowshoeing one other time, back when I was an undergraduate student in Utah. Snowshoeing was a much cheaper option to skiing, though there was plenty of good skiing nearby. Since we've had more snow in the Michiana area since we moved back, we want to get in snowshoeing while we could.

We rented snowshoes through St. Joseph County Parks at Baugo Station of Ferrettie/Baugo Park. The cost is $3/pair. We could have used them until four or so in the afternoon, which is plenty of time. They are rented on a first come/first serve basis. The snowshoes really seemed like big tennis rackets with a flexible guard to squeeze feet with boots through. They were a little difficult to get over the boots, yet after getting them on all 6 of the kids with us, we were getting better at it! To put the snow shoes on, one should be on the snow, not the concrete. There is a convenient picnic table nearby. 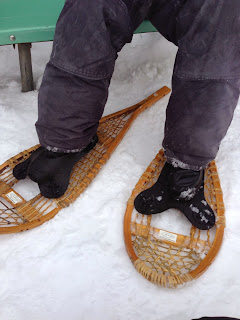 It's smart to practice a bit before heading out. This was one of many falls by the children just near to Baugo Station. Eventually they got the hang of it and were able to keep moving. I noticed right away that I used very different leg muscles near the top of my thigh due to keeping legs further apart and lifting the snowshoes. We were surprised to see friends show up for snowshoeing right behind us. They said their poles helped them feel more confident as this was their first snowshoe trip too. 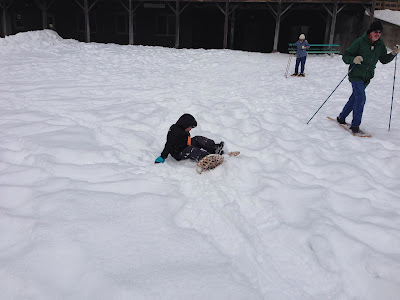 The attendant suggested the trail along the river as a good place to start. It was neat to see how the ice forms on different parts of the river, with snow covering part of the ice. By the way, the trail map is downloadable as a QR code at the parking area which can be very handy! 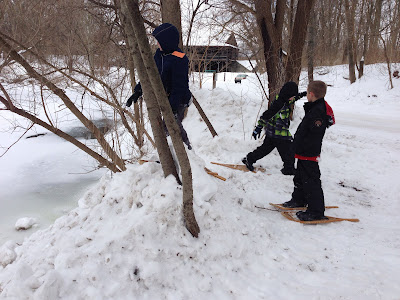 It was about 20 degrees out, but we had the toddler out with us. I carried him in the backpack carrier, so I guess he had his first taste of snowshoeing as well. It's great to find ways to still have outdoor adventures with our little ones. Later on in the hike, he took a little nap. :-) He was cozy and content, though a different type of hat might have been smart. While the temperature was low, it was sunny and calm, making it a perfect time to be outside. 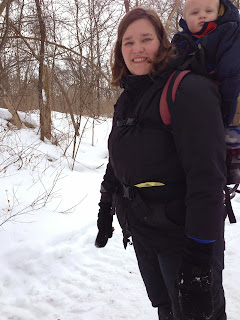 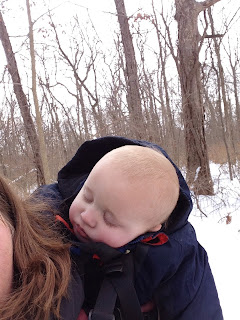 The trail was actually packed down fairly well, so we wouldn't necessarily have needed snowshoes, yet it was still fun to use them. Each of us had a little different of an issue, such as a hard time keeping the restraints on, hurting toes, digging into ankles. We eventually let the kids take them off if they were more comfortable walking with their boots; however, they still had rave reviews even if they didn't stick it out with snowshoes the whole time. 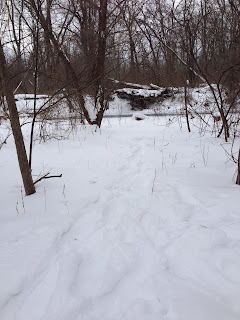 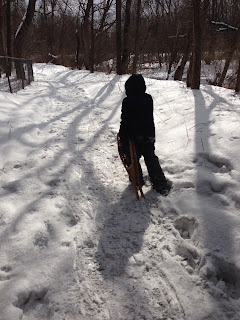 These cousins did great! We'd been watching the Olympics the last couple of weeks and they kept winning medals for different feats, such as keeping their snowshoes on the longest, going in the deepest snow, etc. 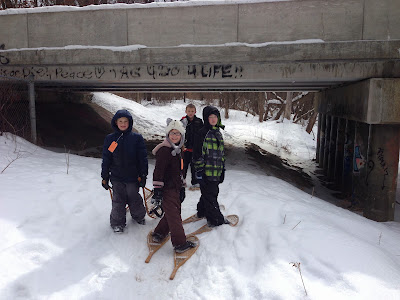 Some of the kids eventually were thinking it was time to get back. As many of you know, I like to combine nature study with recreation. I knew another bridge was coming up so I made that as our turn around point. Sometimes, knowing there is a set destination is helpful to keep going. I asked them each to find 5 interesting aspects of nature. This is an easy way to help them focus on share. We may not know all the technical words (yet!), but we are observing and learning more as we go. They are participating in first hand observation of their natural world and interacting with it.

They found red berries and anomalies on a tree trunk. Interesting movement there! 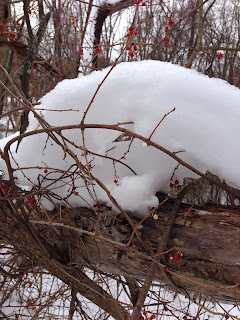 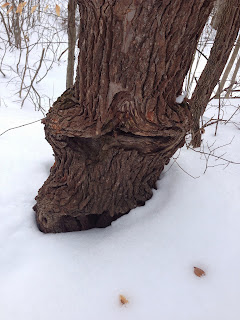 We found poison ivy creeping up trees--there was a fair amount closer to the tube hill, too. Notice the "hairs" coming off the vine to help attach to the tree. I use this as a distinguishing factor when knowing if it's safe to touch a vine. The kids also found a tree with spiky thorns. 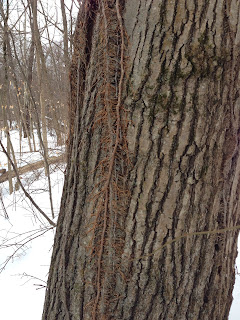 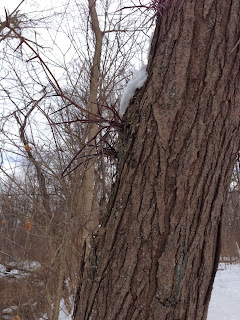 Another found a gall. 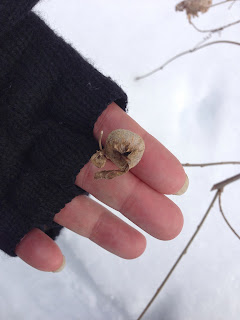 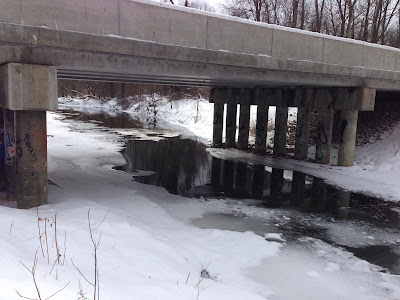 It was a great walk along the river. Each season is so different in what can be observed and noticed! 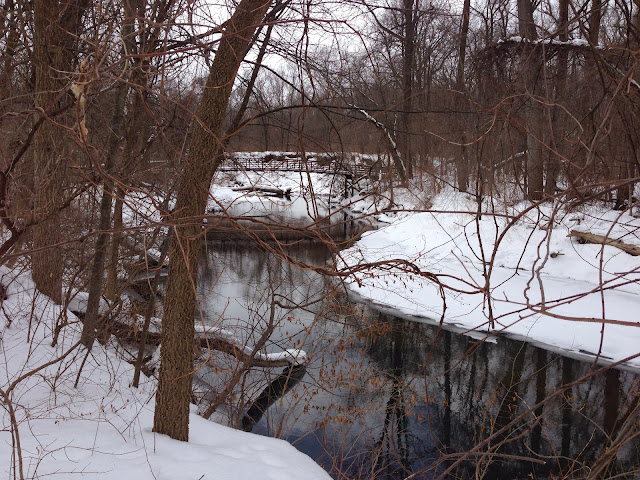 While there were some discomforts, I'd say snowshoeing was a success. It helped they could go back to their tubing when they were done. Some of us warmed ourselves by the fire inside and others kept going down the hill. We had a fun outdoor day and even scored some Olympic medals! 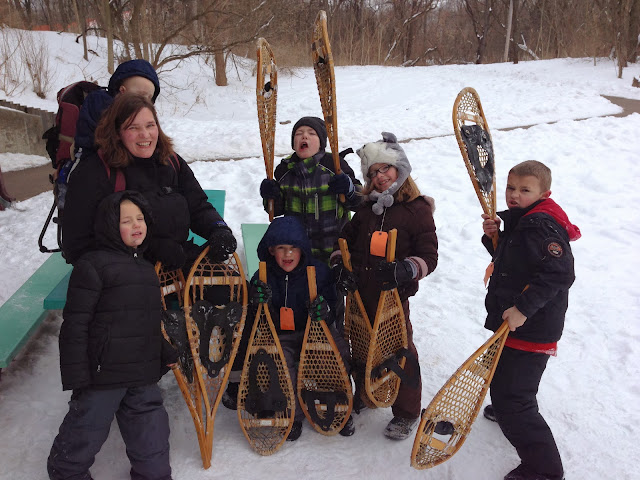