The kids had fun sledding this week! The temperatures have been a little warmer and it's been easier to get outside. We were surprised to get a phone call letting us know one of the kids ran right into a window and broke it while out the other day. Cousins went home, told their mom, and then she called us. It's good to have a network of spies, right? I went to investigate. Obviously no one was hurt. They sled at a church nearby. It was a double paned window and only the outside part was broken. There was still glass around and I could see exactly what happened. The child in question was sledding too close to the building. They had always used the longer hill so hadn't thought of "rules" for being too close to the building. I called over to the church let them know and that we were willing to pay for the damages. Then I thought about how to approach the situation. 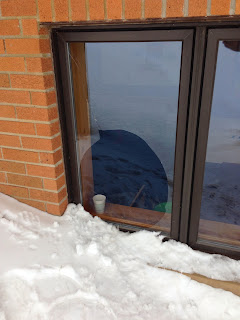 I was really surprised our kids didn't tell us about breaking a window. We knew they weren't out for long--we can see them from the front window, so let the 4-9 year olds go out on their own. I must say, it's been a very nice arrangement with a younger one. My mom reminded me they are kids and don't have the same skills to always approach sensitive subjects even if we've talked about things like this before.

When they came home, I asked them about sledding the day before, hoping they might tell me what happened on their own. They said they had fun and really enjoyed making snow forts after. More leading questions on my part, but no one was fessing up. So, I told them what I knew and asked about what happened.

Of course, we talked about what they should do if something like this happens again, talked about making restitution, and talked about some common sense strategies when sledding (like staying farther away from the building). It was a little emotional for the guy in question, but I'm a little glad that it was so he can recognize those feelings of right and wrong and learn how to fix things when we mess something up. 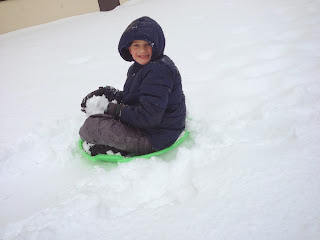 I teach college classes online by trade and often encounter plagiarism issues. Looking further into the subject a Facebook conversation had several friends mentioning instances where they got caught cheating and others wishing they had been caught earlier in their education. While I don't want to "catch" my child doing something wrong, I'm glad we had this experience so we could talk about and learn some life lessons. We're all going to make mistakes and wrong choices so knowing how to turn them into a learning experience at a young age will be a skill he can take with him throughout his life. He wrote an apology note, helped pick up the glass from the window, and agreed to pay half of the cost of the window when they tell us how much it will be. That's a lot of money for a 7-year-old, even if we will try to help him by providing extra chores for pay around home. He's been such a saver with his birthday and holiday money to have it all drained for a window is big.

Lessons learned for me as a mom:
1. I'm glad we have "community" to help us rear our children. While I like to think the best of my children, I'm grateful when someone points something out to me about my kids that I should be aware about. Not the small stuff, but the things they should take responsibility for and that can or might cause damage to themselves or others.
2. Sledding is still fun! While there are risks associated with it (so glad no one was hurt), there are ways to minimize the risk (sledding in a safer area). I'm glad we will have second chances to still use the area in a safer way. Learning how to negotiate the risks of being out in nature is part of the learning experience process.
3. I'm grateful my children have experiences where they make mistakes while they can still be encouraged to do the right thing to help prepare them for the future.


Risk is inherent. When we spend time outside in recreational and nature activities, there will be risks. Acknowledging the risks and being open to make them learning experiences lets us learn and reinforce life lessons while children are young.

I found this article the day after I wrote this and LOVED it! Part of it reads:
Louv asserts that fathers “at least traditionally were more likely to expose their kids to risk — risk with a purposeful and positive intent. Fathers were more likely to rough-house with their kids. They’re traditionally the ones who took their kids further into nature. These experiences serve an important purpose whether they’re provided by fathers or mothers, and mothers are increasingly sharing that role. If kids [aren’t allowed to] take small risks early [like climbing trees], they’re not going to have a clue how to deal with big risks later in life.”

This, Louv maintains, is a problem: “We’re living in a society that has increasingly removed perceived risk from children’s lives; but a risk-free childhood is not risk-free.” 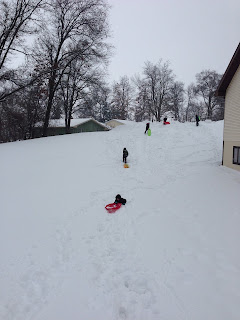