An Easter Nature Walk at Wellfield

It is starting to feel like spring! We haven't even pulled out the boxes of Easter things yet; however, Easter is still on our minds. We went to Wellfield Botanic Gardens in Elkhart for an Easter Nature Walk. I created this a few weeks ago for my MOPS group. I've been waiting for a little more "color" before we explored it in more depth. Wellfield was a perfect backdrop for our walk. 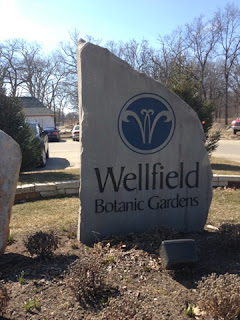 The boys immediately found white on one of the Elk's guarding the trails. We love seeing the Elks out and about!

Matthew 28:3 His countenance was like lightning, and his raiment white as snow:

Matthew 27: 28-30 And they stripped him, and put on him a scarlet robe. And when they had plaited a crown of thorns, they put it upon his head, and a reed in his right hand: and they bowed the knee before him, and mocked him, saying, Hail, King of the Jews! And they spit upon him, and took the reed, and smote him on the head.

Mark 15:17 And they clothed him with purple, and plaited a crown of thorns, and put it about his head,

Something that smells good was kind of tricky with spring not in full force yet . . . they tried really hard, but it wasn't until we were leaving and saw an evergreen that I was very hopeful that we had found something with fragrance. We even asked one of the workers for leads. It will be a different story in a short time. 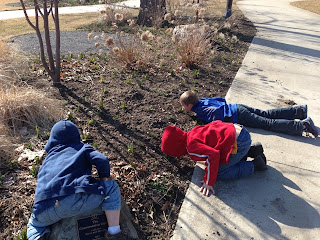 Mark 16:1 And when the sabbath was past, Mary Magdalene, and Mary the mother of James, and Salome, had bought sweet spices, that they might come and anoint him.


Matthew 28:2,5 And, behold, there was a great earthquake: for the angel of the Lord descended from heaven, and came and rolled back the stone from the door, and sat upon it. And the angel answered and said unto the women, Fear not ye: for I know that ye seek Jesus, which was crucified.

Matthew 27:31-32 And after that they had mocked him, they took the robe off from him, and put his own raiment on him, and led him away to crucify him. And as they came out, they found a man of Cyrene, Simon by name: him they compelled to bear his cross.

Matthew 21:8-9 And a very great multitude spread their garments in the way; others cut down branches from the trees, and strawed them in the way. And the multitudes that went before, and that followed, cried, saying, Hosanna to the Son of David: Blessed is he that cometh in the name of the Lord; Hosanna in the highest.
Matthew 27:29 And when they had plaited a crown of thorns, they put it upon his head, and a reed in his right hand: and they bowed the knee before him, and mocked him, saying, Hail, King of the Jews!


Matthew 21:12-13 And Jesus went into the temple of God, and cast out all them that sold and bought in the temple, and overthrew the tables of the moneychangers, and the seats of them that sold doves, And said unto them, It is written, My house shall be called the house of prayer; but ye have made it a den of thieves.

Matthew 28:6-7 He is not here: for he is risen, as he said. Come, see the place where the Lord lay. And go quickly, and tell his disciples that he is risen from the dead; and, behold, he goeth before you into Galilee; there shall ye see him: lo, I have told you.


Matthew 27:50 Jesus, when he had cried again with a loud voice, yielded up the ghost.

Isaiah 60:1-2 Arise, shine; for thy light is come, and the glory of the Lord is risen upon thee. For, behold, the darkness shall cover the earth, and gross darkness the people: but the Lord shall arise upon thee, and his glory shall be seen upon thee.

And, behold, the veil of the temple was rent in twain from the top to the bottom; and the earth did quake, and the rocks rent;  . . .

Now when the centurion, and they that were with him, watching Jesus, saw the earthquake, and those things that were done, they feared greatly, saying, Truly this was the Son of God.


Matthew 27: 24-26 When Pilate saw that he could prevail nothing, but that rather a tumult was made, he took water, and washed his hands before the multitude, saying, I am innocent of the blood of this just person: see ye to it. Then answered all the people, and said, His blood be on us, and on our children. Then released he Barabbas unto them: and when he had scourged Jesus, he delivered him to be crucified.


We didn't really watch the sunrise (but maybe we still will!), but we did find this plant! It had the thorns on it!
Matthew 28:1 In the end of the sabbath, as it began to dawn toward the first day of the week, came Mary Magdalene and the other Mary to see the sepulchre.


The boys found this round stone, saying that if it was dug up that it would roll. Way to think beyond the top of the soil!
Matthew 27:60 And laid it in his own new tomb, which he had hewn out in the rock: and he rolled a great stone to the door of the sepulchre, and departed. 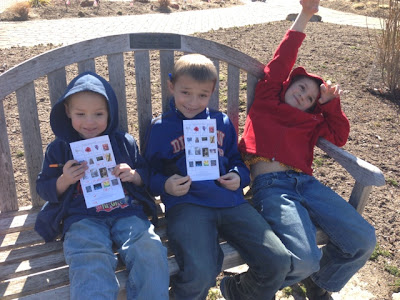 I will say the kids weren't excited about coming here for our activity, but they got into as we went and did a great job thinking outside the box on our walk. I loved that we were reading from the scriptures, out in nature, exploring a new place, focused on details of our search, and celebrating Easter in an active way. Great memories! 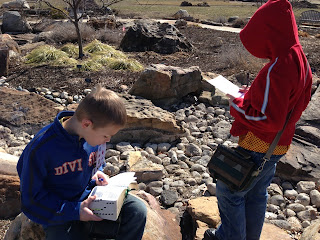