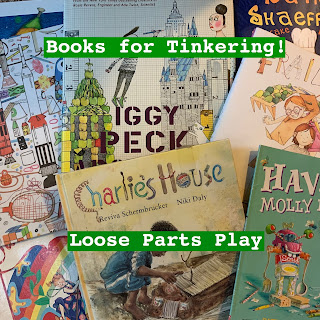 I met another mother recently who has boys who like to build and make things--so fun to see those children be SO creative! I realized I hadn't pulled together a list of books specifically related around more tinkering topics, so thought now might be a good time.


My kids have been enthralled by the Rosie Revere, Engineer, Ada Twist, Scientist, and Iggy Peck, Architect books recently! The youngest two have long been makers or tinkerers, so I appreciate having good books to inspire them.

Rosie Revere, Engineer. Rosie wants to be an engineer, sneaking bits and bobs that others discard. She loved to make gizmos and gadgets, but hid them under the bed as she was embarrassed when a relative had laughed at her invention. Later her aunt (the real Rosie the Riveter) dreamed of flyings. Rosie Revere, Engineer figured out a way to help her fly! Her aunt laughed as well with this creation, but also gave her support at this first try, rather than leaving her to feel like a failure. Rosie learns perseverance as she continues to the next flying model. Soon her whole class wa making gizmos and gadgets, cheering at their failures!

Ada Twist, Scientist Ada is always asking questions and is full of curiosity. Ada figures out how to think through problems and conduct experiments, even if they don't quite go as planned. She tries to figure out the stinky smell in her house, leading her on an adventure of exploration. While there are quite the messy situations at times, her parents are calm and talk her through the issues while still allowing her to experiment and explore. Ada uses scientific tools like goggles, beakers, and scales to conduct her experiments.

Iggy Peck, Architect has always built things from diaper towers to a dirt Sphinx. Unfortunately, in grade 2, he had a teacher who had a bad experience as a child on an architecture tour and banned building in her class. But Iggy Peck didn't listen and built away! On a field trip, the foot bridge was out, but Iggy Peck had a plan. The children worked together to make a bridge and the teacher realized how important building dreams can be.


They also have workbooks to go along with these as well, such as Iggy Peck's Big Project Book for Amazing Architects. From the reviews, this includes a lot of drawing and all the activity books may be suited more for elementary school ages. The quick peek I got showed lots of "materials" to use for building--really lots of loose parts! I think this will be on the Christmas list for at least one of the kids. Ada Twist's Big Project for Stellar Scientists is another option that helps children think like a scientist and explore many types of scientific themes. I love the open-endedness of projects and emphasis on exploration and scientific thinking. Rosie Revere's Big Project Book for Bold Engineers  helps develop problem solving and critical thinking skills through STEM concepts and approaches. All of these "workbooks" do offer specific suggestions which may veer a bit from a more pure loose parts concept; however, they can be great springboards for investigation and stimulate creative thinking.

Addy-Matic and the Toasterrific is a funny exploration as a girl attempts to create an automatic system for toast using principles from a chain reaction machine. I love Rube Goldberg type reactions, so this is a perfect way to put in story form how one girl attempts this. The book shows how simple machines work, how to face a problem, and carrying out a plan in creative ways.

What Do You Do With An Idea? is an award winning book that has universal appeal as a we get and share ideas, wrestling with the opposition of others, and how we can protect and feed our own unique ideas. This book inspires us to the change the world with our ideas. Not exactly tinkering in the illustrations, but gives us confidence and shows perseverance in coming up with an idea and making space for it in our lives.

Awesome Dawson My kids love Awesome Dawson! Dawson's motto is "Everything can be used again!" Dawson invented things since he was in diapers progressing to becoming a robot out of a chicken bucket and oven mitts to a bedsheet and wind powered way to get to school. He began bringing old toys back to life. He has access to all kinds of discarded materials, such as an old vacuum cleaner, broom and pool hose. The new robot is tasked with all of Dawson's chores with a brain made of cat food. The robot goes berserk, but Dawson uses his creations to save the day. He still uses his inventions to help with chores, but in a more realistic way.

Have Fun, Molly Lou Melon had an overflowing toy chest, though her grandmother often chatted with her about how she used to make her own toys. So Molly tried it! She made an outdoor dollhouse in the trees, a cardboard racer, shapes in the clouds, and more. A new girl moved in with more traditional toys, but Molly Lou Melon rubbed off on her until the neighbor started making her own toys as well. Loved the grandmother inspiration in the book as she winked from the clouds.

Edward Built a Rocketship Edward wants to explore space, visiting the planets, so starts making a plan. He gathered odds and ends and tinkered to create his rocket ship. His mother kissed him goodbye as Edward's rocketship blasted off into the space of his imagination. He visited aliens and planets and floated down in his home made parachute. What a creative story!

Henry's Amazing Machine Henry loved putting things together since he was a baby. He made an Amazing Machine by the time he was six, covering his bedroom and then his bathroom! He kept building and building as he grew older, building outside as well! Neighbors and others started to come visit what it was, with people setting up lemonade stands, offering pony rides, adding music, and more. Henry's parents were incredibly patient with all the space needed for tinkering, until they had enough with being pushed out to a tree house. He found a new home for his creation with the local carnival, bringing the community together.

Clare Thompson’s Junk DNA follows the journey of a pile of junk. As it shifts and moves, a few pieces land perfectly to create a being. The creature uses more metal scraps to build a house and then another being. Together they use the pieces to create vehicles, more people, and shelter. They continue to innovate with screws, springs, bottle caps, and wrenches, building a ginormous being. This causes problems as the giant starts capturing and deconstructing the smaller beings. Inspired by memories of the second being, the first being devises a tricky plan to take out the giant.
Thompson’s wordless picture books is not flashy; however, the neutral colors, along with metal variations, such as rust, really make the story shine. Without words, the reader can clearly figure out the story line; however, there is plenty of room to fill in dialogue and create additional details. The wordless aspect almost allows more creativity as the reader becomes part of the story telling. C.P. Thompson Press ’s ingenuous artwork reminds us all to experiment with what we have on hand.

The Tin Forest A man lives in a metal scrubland. He dreams of living in the forest, yet wakes up to the doom and gloom of live. He decides to make the plants grow out of the tin he is surrounded by. The metal turned into flowers, birds, and branches--a forest made of garbage and tin! Soon real animals and plants also filled the space.

Katie Shaeffer: Pancake Maker Katie wants to make pancakes but is not allowed to use the stove. She devises a way to make a pancake maker, collaborating with her new friend, Baxter. She has a great box of paraphernalia (loose parts!) and they get to work, perfecting the pancake machine. The machine makes too many and they share with the neighborhood. Ingenuity, friendship, and sharing are central themes to the story.

Charlie's House A young boy in humble circumstances builds an even better house and care of mud and scraps after seeing his own house built. His imagination takes him on a ride in the car! The review for this on Amazon is not for this product.

Fraidy Zoo A young girl is afraid of going to the zoo, but her family comes up with lots of loose parts creations to help her get comfortable with their upcoming zoo trip. I really enjoy the drawings of the loose parts used to create animals.

Jillian Jiggs Jillian loves to create and tinker! She uses boxes for robots with friends until she has to clean her room. So they helped clean up, becoming pirates, dragons, trees, chickens in a cage, and so much more! Her friends have to go when the room becomes messier than it was before, so Jillian can concentrate on cleaning up her room.

This post contains affiliate links at no extra cost to you. Thanks for helping support the site.