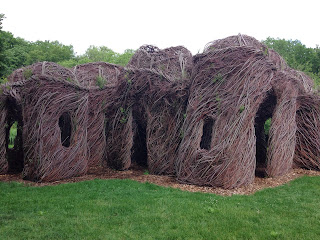 Take Five by Patrick Dougherty is in Niles, Michigan.

I have read various journal articles on "hidden spaces" as an essential component in play spaces for children. Typically dramatic play goes up. Of course, as adults, we often still need to supervise and/or are regulated to supervise, depending on the age of the children and our particular setting. Seeing the background on why these spaces are important can be helpful in feeling more comfortable with "hidden spots" in our outdoor areas. This article by MaryAnn Kirby seems as though it is one of the earlier ones on the topic and is often cited in other research, though also looks at earlier published research as a basis for the information.

The environment where children play makes an impact on their play, with special importance in the middle years of childhood. Adults often recall a special place they play with special memories of "ambiguous, hidden, wild, unkempt, leftover places of childhood days" (Lynch & Lukashok, 1956).  This article looks at how spaces to hide are used by preschool aged children. The study looked at use data and behavior data, looking at both seeing presences and then play in refuge settings, at a preschool in Seattle, Washington during the winter when leaves were often off the tree. The site is described with about 10% of the space having aspects of a refuge, offering "enclosure, encapsulation, and seclusion", with two using vegetation to create the space. One space had a "roof" of leaves, a canopy. She noted footpaths beyond the official enhance to the areas. Plants included blackberry vines, junipers, and broom. Another space had plants that were chest high so children were partially hidden. There were more points of access for the space, giving opportunities for escaping entering without being noted. In both spaces, junipers could be "bounced on, sat on, and sat under." The third space was a built refuge with two higher decks and a bridge. Under these decks, boards went across allowing children to see outside. It also had a door.

Coding for loose parts play was discussed in regards to the study. This could be helpful for others wanting to create a study. The design parameters looked at physical access, visual access, visual cutoff, complexity, scale, and plasticity, linking back to affordance theory. (Shanklin Park in Goshen has done parts of this right with the numerous entry and escape points. Good place to play hide and seek.)

Quotes/Info I Liked:
"One has only to investigate the corners of neighborhood parks and playgrounds for evidence of well-worn footpaths into edges of dense shrubbery and child-sized openings into the cavernous interiors of plant specimens. Wooded open spaces in residential areas are often dotted with forts, huts, and houses, ranging from temporary to elaborate and well-constructed." (My thoughts--living in South Carolina and having secluded woods nearby with grapevines we could swing from. We were close to home, yet had our own "space" that was ours. Also, there is a great example of this at Walker Park in Elkhart with a playground nearby. Guess where my kids like to play? In the magical space below the trees that allows them to have their own hidden space.)
--The "environment modification to create enclosed spaces is high on the list of preferred activities for children. It would seem then, that refuge, a prominent symbol in both natural habitats  and the built environment, play an important role in children's environmental needs." (Hello, fort building and den making? I just saw my youngest hide under a table yesterday--innate activity and need for children?)
--"Plasticity is defined broadly to indicate two things: 1. how manipulable or impressionable the setting is, and 2. the availability of loose parts."
--The typical "play area" in the United States tends to be equipment (designed to promote the development of gross motor skills) set in one side of the park. In many cases, the rest of the park (often far more naturalistic), or eh surrounding area, is a far more exciting place to play."

Important Related Theories/Principles Mentioned:
Theory of Affordances (Gibson, 1977) "Affordances are features of the environment which are identified because of their functional significance for the person (or animal) in the environment. There are many attributes of the natural environment that seem to afford significant experiences for children and thereby sustain their interest. For example, a tree affords climbing, a mound affords a jumping-off point, vegetation affords a hiding place."
Habitat Theory, a humanistic theory by Appleton (1975), the landscape is seen "in terms of their refuge, prospect, and hazard symbolism." "The need to "see without being seen" was essential during early stages of human evolutionary history" as a person could hide or have shelter while observing the environment. Refuges in play space fulfill basic needs of humans to survive. A refuge becomes a safe space related to the safety from their parents. (related thoughts, children closing eyes and they think we cannot see them)
Piaget's developmental stages of play (practice games, symbolic games, games with rules), a blanket creates a sense of refuge with a baby, preschoolers use a hedge as a house, school children play games with rules (my older kids love capture the flag right now--using it for both of their birthdays!)

Application:
"1) Enclosures (refuge) are conducive to dramatic play behaviors.
a. Enclosures which have a ceiling effect offer a greater sense of refuge than those without.
b. Enclosures having sub-spaces or a high degree of complexity offer increased opportunities for the development of play themes.
c. Enclosure which have visual connections to the surrounding environment are preferred.
d. Enclosures offer a sense of privacy, safety, familiarity, and ability to know, which make children feel comfortable.
2) The scale of the enclosed spaces may relate to the content of the dramatic play.
a. Small scale spaces are conducive to dramatic play with domestic themes. These spaces tended to be more intimate allowing fewer (two to court) children to participate. Domestic themes seem to require more cooperative play than adventure themes.  It would be difficult for a large number of children to cooperate in this type of endeavor. (In my research, females tended to use the small, intimate enclosure of Refuge 2.)
b) Larger, loosely joined enclosed spaces permit a great degree of large muscle activity and encourage play themes involving more movement. (Carla's note--reminds me of the Children's Garden in Dayton, Ohio).
3. Multiple point access to enclosed spaces accommodates individual style, allows "escape" opportunities, and lends itself to a greater variety of use.
4. Enclosures which have a degree of plasticity and manipulable parts are better suited to meet individual needs and play objectives.
a. Enclosures which are primarily vegetative (natural refuge) offer a high degree of plasticity and manipulability (loose/flexible parts).
5. The play value of built environments, comprised of fixed parts and lacking refuge components, can be enhanced through the incorporation of overhead canopy, under-deck spaces, manipulable parts, add-on "rooms", and other site changes."


My Questions? Can Piaget's developmental stages of play be applied to loose parts? What have others researched on this as well?