There is something about planning things that I LOVE to do! Even better when I get to collaborate with others for it. My boys are in the middle of a string of birthdays. My now 5 year old wanted to have a Pokemon party--of course we love nature, outside, and loose parts, but they do watch television, read books, and have toys/games. Anyway, I remember my students way back when I taught 4th grade almost 20 years ago in Japan loving Pokemon as well--it has really had some staying power!


For the invitations, I just found an image online and put the party information on top. These were easy to text or email to mommas. :-) 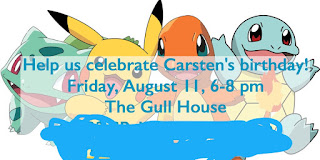 I trolled Pinterest and some blogs for ideas, talked to the boys to help figure out what they'd enjoy doing, and started searching for some active plans for the children. We love using our outdoor classroom and usually try to plan something unique for each section, but it has been a busy week so just went a little more low key on this one. Here were some things we did:

1. Make your own Pokeball! As the boys joined us, they each had to find 5 nuts to make a Pokeball. We have a yard littered with hickory nuts, acorns, and black walnuts so it was not hard; however, it helped make that nature connection and introduced them to names of local nuts. With 5 nuts (my boys say this is a Pokemon thing) they could then create their own Pokeball. I find some tutorials online to make the traditional Pokemon one, but then tried to copy some of the ones my son got for his birthday. The ping pong balls were less than $10 for 144 at Amazon. I had plenty of Sharpies on hand, but also picked up more while doing school supplies. I believe you can never have enough Sharpies, right? 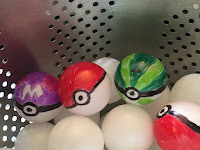 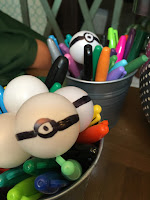 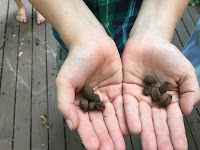 Since we were having younger kids, I worried about this a bit as I knew they wouldn't be able to do as intricate design; however, there was a real sense of ownership in however their ball turned out as they were the ones who made them. I also started some with the black "belt" and center "button" so they could just focus on their designs. Some used them, others didn't. It's all good. My 8-year-old was actually pretty awesome at these! We made these in our art area. 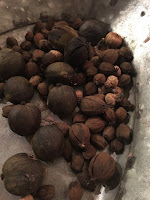 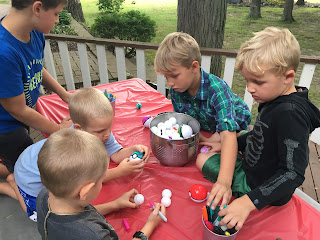 2. Catch Pokeballs! We gathered all the balls the boys decorated and combined them with "favors" for the party. I found Pokemon bracelets, little Pokemon figures, and these vending machine balls that look like Pokeballs. My older boys hid these while the younger boys all ate. To make it fair, we gathered them all into one place and then divided them out so the boys could have their balls back and then had equitable favors. With slightly older children, I might extend the hiding space on this or make it more of a scavenger hunt. We had over 10 3-6 year-old boys, mostly without their parents, so making it easier and in a visible space was key for this group. 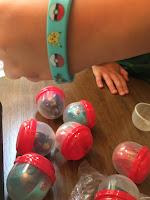 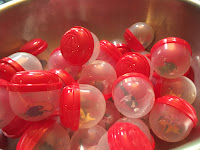 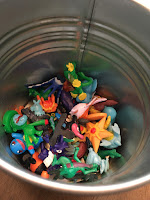 3. Use an "Old Rod" to go Fishing! We live near a pond so could have extended this to real fishing and/or having live fish available for the kids to see; however, we just made simple little rods with a stick, string, some of the vending machine balls (hot glued inside), and a button magnet. We just put paper clips on duplicate Pokemon cards from my son's stash. We put out some blue fabric for a "stream" in the open play area of our outdoor classroom. The boys could fish with the "Old Rod" for a Pokecard. Let me clarify, we did invite some girls to the party, but only boys showed up. So if I say boys, it's really just because it was boys! :-) 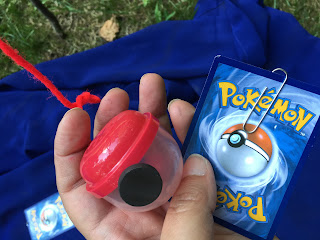 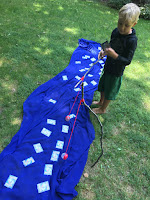 4. Eat Pokemon inspired food! I found several ideas on Pinterest (of course!) for fun food. Since the party was right about dinner, I found pre made pizzas at Wal-mart and rearranged the pepperoni so half of it was red. I bought a can of sliced black olives and arranged the typical "belt" and button for this. We also used strawberries and cheese sticks for another "poke ball" (yogurt in the middle) and did a similar plate with red peppers and cauliflower (ranch in the middle). Ssh! My husband didn't realize they were all Pokeballs and put the outside upside down. I switched them after I noticed. We had Pidgie popcorn, Squirtle Squares (Cheese Its), and Diggler Worms. My 8 yo found cards to display with these. 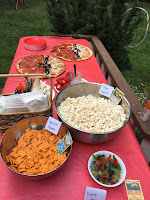 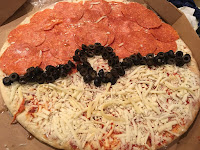 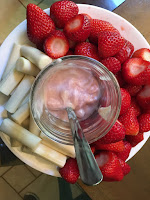 For the cake, my son wanted an ice cream cake. I bought one at Wally world and added the Poke characters from our big bag we had purchased for decorations. We ate in the gathering area of our outdoor classroom. 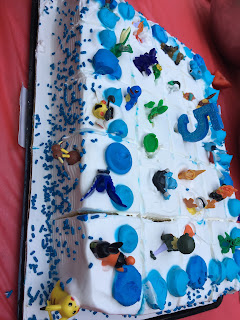 5. We had a basket full of Pokemon action cards, design your own Poke cards, and Pokemon jokes. We did a little "training" with the action cards and the older boys enjoyed reading the cards throughout the evening. My nephew LOVED the actions--my mom kept him entertained for quite a while with those. Here is an additional set of actions that is more comprehensive, but not as cute. 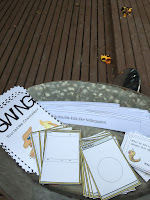 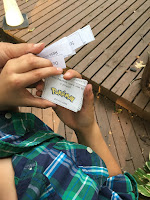 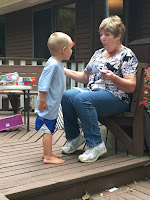 6. Enjoyed being outside! When the kids found a toad (many times!), we took the time to enjoy the toad. Later the kids discovered the woods and started exploring. Really, they just need that time to explore out there. We will have to have them over again soon just to explore! 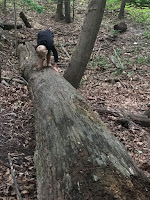 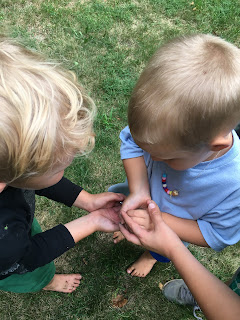 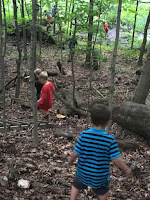 7. Test your Pokeball! We have these ramps (see tutorial here) in our Build area. The boys started testing their Pokeballs down the ramps, changing and adjusting the flow as they went. They really enjoyed this--such engineers! They also just enjoyed playing with the different "blocks" and building stuff we have there. 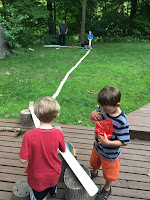 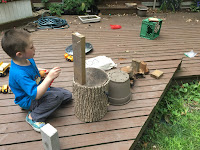 8. Make your own Pokemon Character I had supplies to make your own Pokemon characters (smaller and bigger pom poms, goggly eyes, glue, and pipe cleaners), but we really didn't get to it as they were having plenty of fun playing outside. Maybe next time! I like the suggestions of materials for recycled Pokemon at this blog. 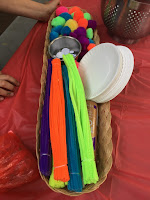 We had another fun outdoor birthday party, combining the boys interests with things we can enjoy outside!

This post may contain affiliate links at no extra cost to you.