Earlier this week, I took the boys out to Ox Bow County Park to learn about bee keeping. My husband and I have "talked" about keeping bees, so I was interested in what he had to say too even though I've read plenty online.


Gordon shared how his hives work. Each tray can collect honey. 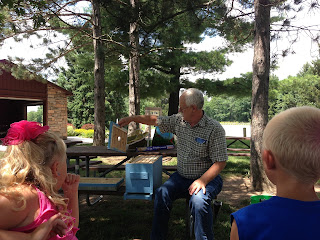 He starts with a plastic, partial honeycomb shaped base so more bee time and energy can be put into making honey rather than making structures to hold the honey. 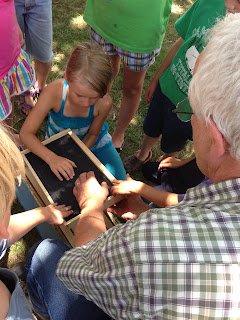 He also showed us the gear he uses. He usually just uses the veiled hat and doesn't get stung too often. If a person does get stung, he said the best way to heal quickly is scrape under the stinger with a fingernail to keep as much of the sting out. If it's pulled out then more of the irritant is squeezed under the skin. The baby chewed on hickory nuts while we learned about the bees. 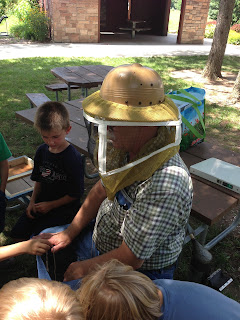 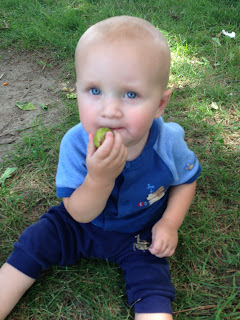 It was fun for bigger boys to try out the special hat, too. 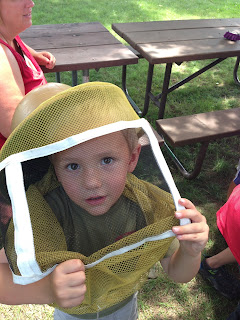 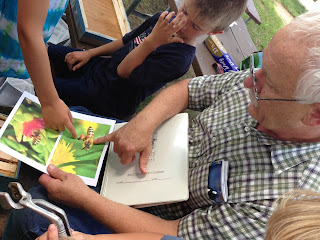 Then he brought out his group of bees! He had them in a clear case in his air-conditioned car to keep them cozy. The kids had lots of questions. We learned about worker bees, drones, queen bees, swarms, and more! 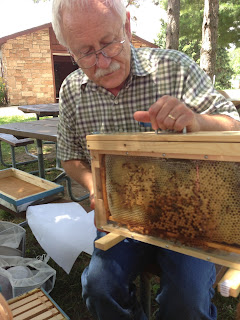 Then, he cut into one of the trays of honey, scraping off the beeswax cap. The honey started to flow! 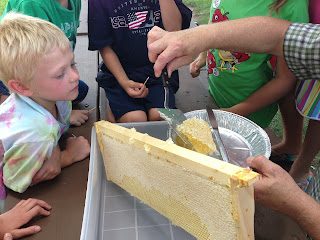 The kids all tried it. It was easy to chew on the beeswax, too, which was kind of neat! It still amazes me that the bees make such perfect honeycombs with these. The honey was delicious! He maintains hives at DeFries Gardens, which is part of River Preserve County Park. He sells some honey from his home and the honey can also be found at Goshen Farmer's Market. 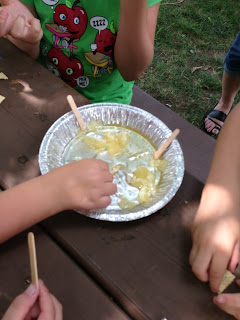 Later, the kids played a game with different "flowers" (jars with colored water). They simulated sucking water from flowers with straws (using the cool action of covering the top of the straw and the water stays in) and then brought the liquid to a central location, much like bees collecting nectar. 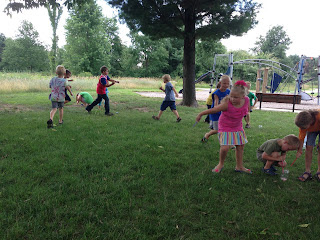 The kids also made a bumblebee craft. I like how the programs through Elkhart County Parks usually have a hands-on approach, a snack, a craft, and an active component. Science Sleuths is available for 6-9 year old children and Nature Nuts is open for 3-6 year olds. I have kids in both categories so often venture to both. I tend to stick around for the programs since I like being around good teaching and the learning more about the topics. 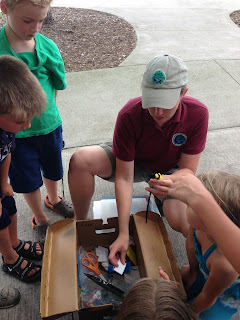 They were cute little bees busy around their little brother. Then the children went on a walk looking at the flowers, checking for pollinators. 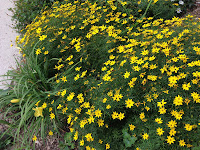 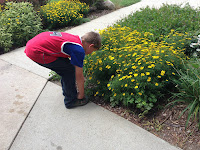 Then they got together to talk more about bees with Krista Daniels, one of the naturalists. She usually has a handout to send home with the children as well. 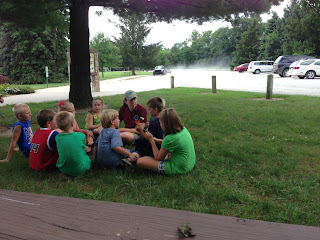