As part of the Nature Nook book group at Woodlawn Nature Center, I traveled to Gene Stratton-Porter's State Historic Site to meet friends for a tour and book discussion last week. Before, I pulled up, I saw a huge banner for their upcoming Indiana Master Naturalist class--that will be great! There are also other classes going on throughout the state. 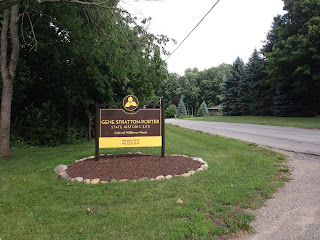 While I knew basics about Gene and visited this historic site in the past, I learned (or was reminded) of how powerful she was as a female for her time from the tour. Here is a brief biography, summarized from the site biography and tidbits of the tour. Gene Stratton-Porter was born in Wabash County, IN, growing up on a farm. After marrying and moving near Geneva, at Limberlost Swamp, she studied nature more intently. She wrote about what she found, submitting articles to magazines and other publications. She became a popular author in her day, with many works of fiction (though usually very focused on nature), nature studies, poetry, and magazine articles. Her popularity increased as she wrote. Later, she bought this property on Sylvan Lake near Rome City, Indiana. She and her husband met here when she was younger. She helped save endangered species on the property, transplanted all kinds of plants, and was able to continue her nature studies. While referred to as a "cottage", it is still a sizable home with many unique characteristics that make it perfect for her setting. In later years, she moved to California and became the first female movie producer so she could do a better job at producing her own works. She wrote many books: Gene Stratton-Porter Books

As I entered the grounds, I was greeted by a pair of owls welcoming me. The owls are made of Indiana limestone. Indiana limestone is an important construction product on many famous buildings throughout the nation. They sit atop puddingstone pillars. Puddingstone is a rock I first learned about at Gene Stratton-Porter's state historic site about 12 years ago when I visited with family. It is a conglomerate rock made up of many round pebbles held together by a substrate. The colors and composition vary from place to place. 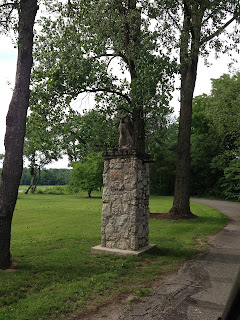 I parked near a pavilion and took a short walk through the woods to find the gardens and house. 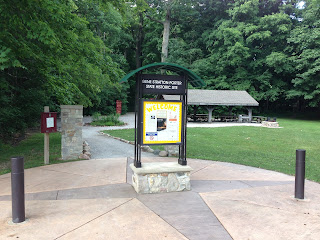 I was reminded of the many books and nature studies she wrote over the years. I have read several and seen a few movie adaptations of others. She was a real conservationist before it was popular. The trees are large and majestic in the woods! 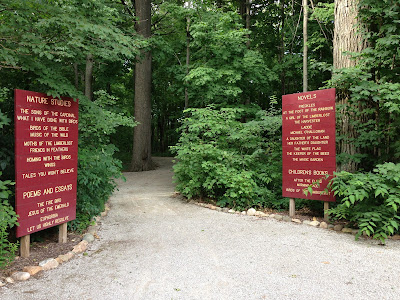 The stroll through the woods is gorgeous. There are many Mayapples and Paw Paw trees. 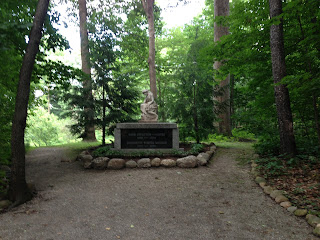 This was a unique strawberry plant with white berries! Gene requested plants from all over the states and planted them in her gardens. 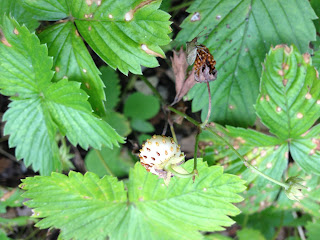 Jay was one of our tour guides. He is a docent at the state historic site and helps in the gardens. He showed us how much work he's done there to keep the grounds looking neat. During the tour, we were able to hear neat information, such as how the house was built, how many people worked there and tended the garden, stories about special plants, etc. 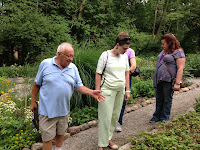 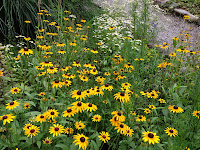 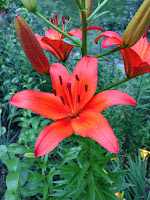 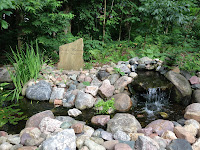 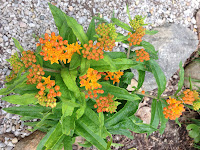 The view of Sylvan Lake is gorgeous. Across the water is an island that is preserved so there will always be a similar view out the windows as what Gene saw when she lived at the house, though the trees have certainly grown! 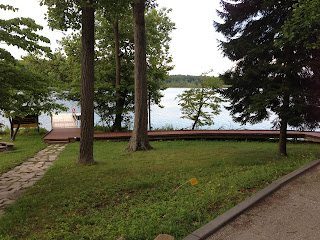 From the outside the cabin is not very assuming, though it is more spacious than it looks. It's much larger than a lake cottage. While simple, it is heavily influenced by Frank Lloyd Wright, with open spaces and blending with nature. 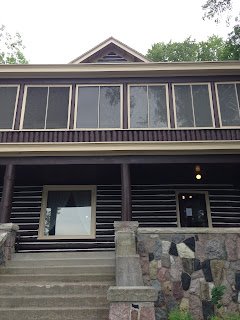 We saw where a turtle just laid eggs and covered up the hole really well. 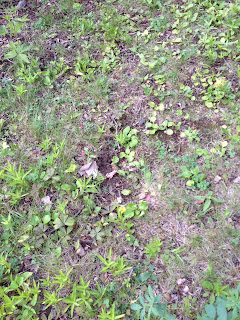 The naturalist gave us a tour of the house. She wears many hats at the facility! 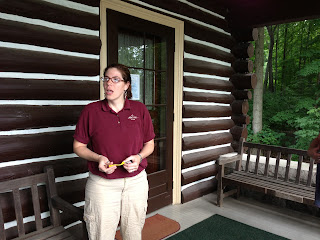 Gene had many shallow curio cabinets along the walls to display some of her "treasures". The balls to the left are actually petrified cow cuds! She took these pictures to the right that are hanging on the wall. There are pictures of Gene and her family throughout the home. 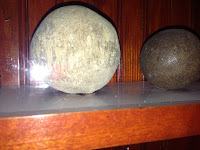 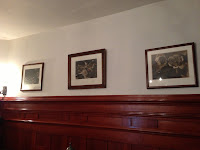 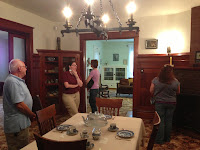 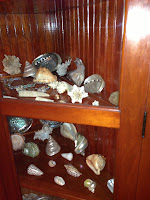 The view is beautiful! It is called a "million dollar" view often. From the library, you can see out any side of the house. This was a neat design feature. So much thought was put into planning small details of the house! 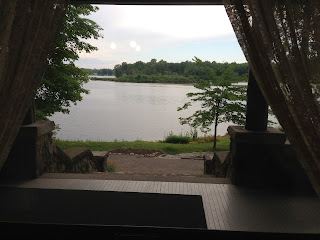 There are 4 fireplaces in the house. This one contains hand picked stones with at least two pictures as part of the design. There is a moth in the middle and a continental soldier to the right. Some even say they see a girl with a bonnet. Have fun finding shapes yourself! 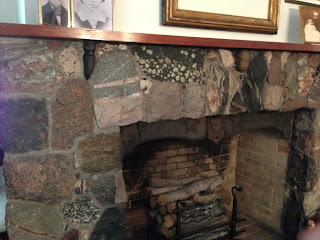 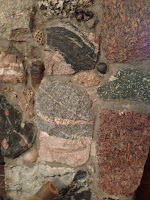 The puddingstone is beautiful! 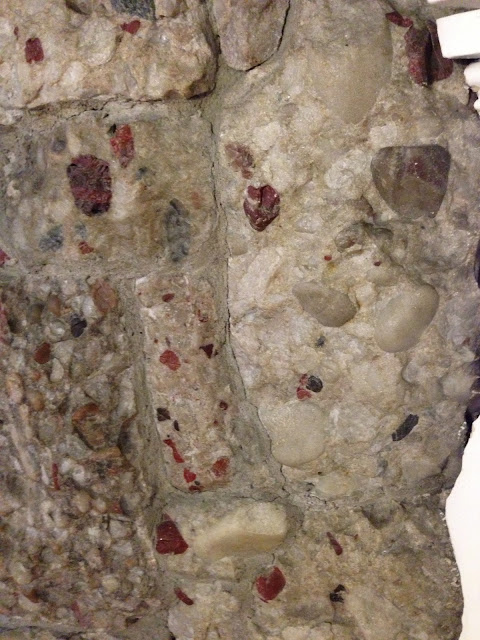 There is a garden room with representations of collections Gene might have had and detailed maps of the gardens. They said after transplant time, she would open all the windows and put birdseed out for the birds. This is really bringing nature in! I learned so much about Gene through the tour. It was very informative. 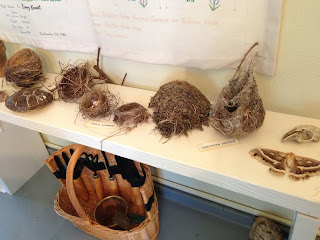 We also stopped by the gift shop. I loved this collection of seeds. They were very inexpensive and collected from right on the property. To think, I can have plants from Gene's house growing in my garden--kind of cool! There are also bookmarks with pressed flowers from the property. There are also reasonably priced trinkets and such for sale. 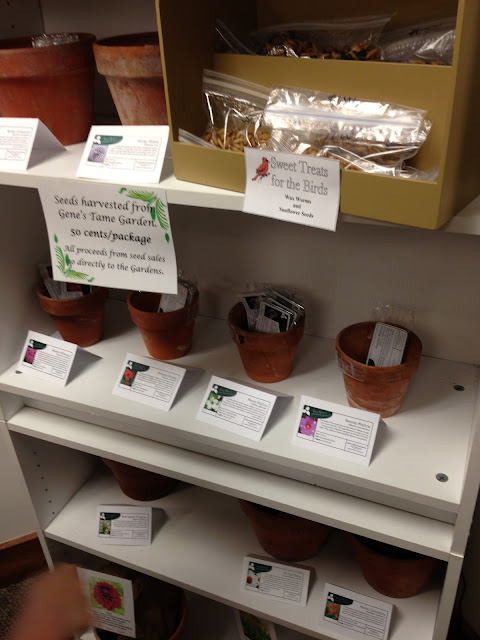 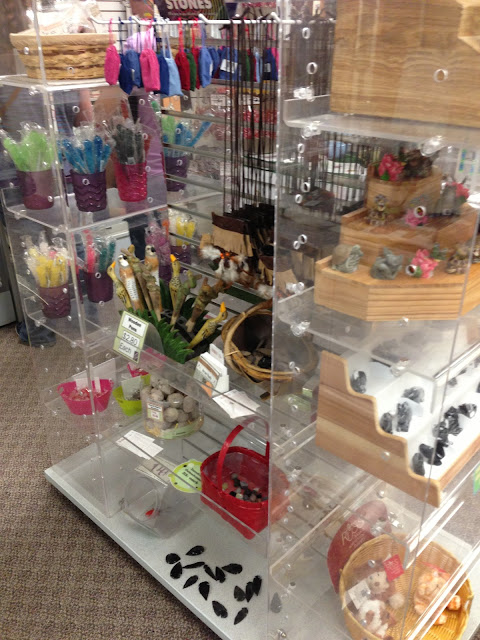 There is a great collection of her books and DVDs for sale. You can also find puddingstone! There are several variations. 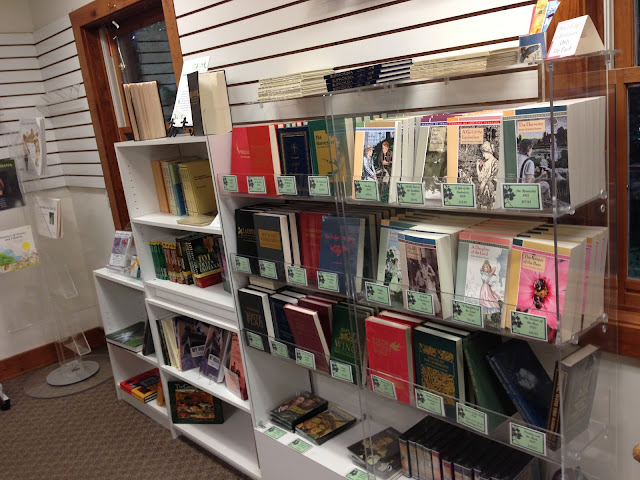 which is available to use when going outside. Sounds like a good natural alternative to keep bugs away! 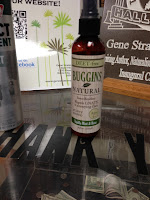 Gene Stratton-Porter's "Wildflower Woods" Cabin is a nice get away. I enjoyed the walk through the woods (there are 125 acres total as part of the property) and touring the cabin. There are also places to have a picnic. We ate home made scones (delicious--thanks!) and discussed Gene and some of her books. I'm looking forward to reading Laddie, as it sounds the most autobiographical of the books. Others in our group shared other titles about Gene as well.

There are a few nearby attractions, such as Cook's Bison Ranch and Maple Wood Nature Center. Two state parks are less than twenty miles away, too. We loved Pokagon State Park and look forward to going to Chain O'Lakes State Park.

If you go, Gene Stratton-Porter State Historic Site is generally open April 1-Dec. 1, during the daytime, though there are special programs and events that might be outside these hours and dates. Prices and schedules are available here. While there is a charge, I think it's fairly reasonable. I think the upcoming night hike/stargazing tour and Chatagua Days (where Gene and her husband met) look great! I've also heard good things about their Owl-oween in October and holiday walk in December. I'm sure it looks great decked out for the holidays!
Posted by Carla Gull at 8:52 PM