Earlier this week I took the kids to an Underground Animals presentation by Elkhart County Parks at Bristol Public Library. There have been so many nature related programs this summer--we are loving it! The topic for many libraries is Dig into Reading, so it's perfect for nature lovers. Check out the programs at your local library to see what is being offered. I've seen gardening, worms, fairy houses, rocks, dinosaurs (okay, I taught those!), and more! And they are free!

Looking at all the furry creatures on the table, we might not have thought of these as "underground" animals at first. However, Andy started with a PowerPoint presentation about different animals that burrow underground and why they might go underground. Basic reasons include raising young, for protection from the elements, to avoid predators, to raise their young, and to eatIt was very informative and had many great pictures. True to form, Andy needed to make a good joke. He put a picture of Eyeore up to talk about "burrows". It was a little above the kids' heads, but the adults gave a groaner laugh. Have to love a good play on words. 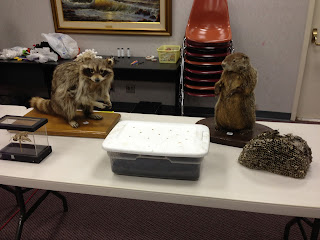 While we think of many of these animals running on the ground or swimming in the water, they often go underground for various reasons, like raising their young, sleeping in the winter and more.

Obviously, we think of the groundhog (or woodchuck) peeping out of its hole in February. While not entirely accurate as the picture portrayed for Groundhog's Day, the male groundhog does often come out of its sleep in February and visits the dens of female groundhogs in the area. They dig big burrows with multiple entrances in the summer. We see woodchucks in our backyard often in the spring. They like to live under our shed. The abandoned burrows are often used by other animals later.  In the winter, they seal off their chamber. Other animals, like skunks (up to 14) might share other chamber of the same burrow.

The red fox will usually only go underground to raise babies. They find an old fox den or other burrow with two entrances in December and then have babies around March or April. In our area, Rum Village Nature Center in South Bend had great pics of baby fox in Spring on  its Facebook page. It has a fun wildlife viewing window. 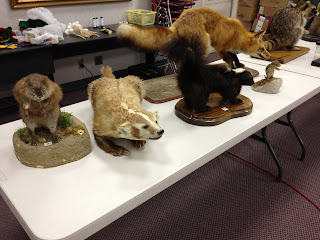 Andy showed us all the badger. This is actually quite a good digger. It can dig as fast as 10 men digging. While not a fast runner, it uses its digging skills as a way to quickly hide. We watched Wild Kratts programs (children's show on PBS) on the badger. They basically are going to be wherever they want to be. In Indiana they are of special concern and live mainly in the north and central parts of the state. I like to look at the animal profiles on the Indiana DNR website, as it has good animal information for our greater area. One interesting fact is the badger hairs (very coarse) used to be used for shaving brushes! These nocturnal animals are rarely seen; however, their crescent shaped diggings can be found from time to time. 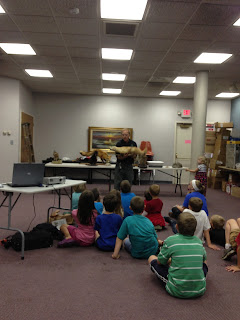 Andy also showed us the worm bin. Earthworms prefer being underground and are valuable contributors to our soil. 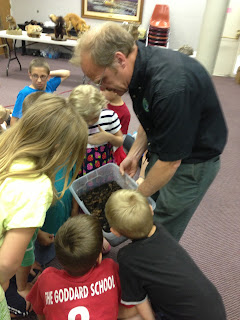 He also showed us how to make woodchuck puppets. They pop up and down from their burrow! 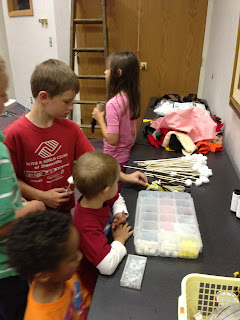 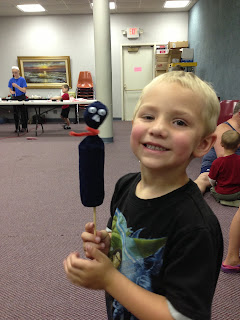 All the needed supplies were ready to go! We came home with three, as we have three boys that can make the crafts. 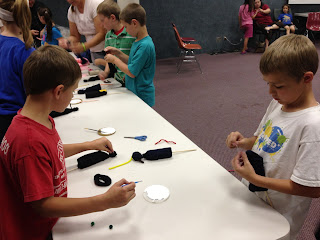 Meanwhile, the mover and shaker was trying to get up close and personal with the taxidermy animals!  We're grateful for helping hands (like the children's librarian, older boys, and grandparents) that keep him out of trouble. 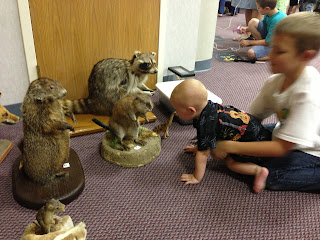