This last Thursday, we stopped by a blueberry place on the south side of CR 6 in Elkhart called Blueberry Park. There are two places right across the street from each other, which makes for having good choices. We tried this place last year once--we needed blueberries for something we were making and it seemed easier to stop here and pick berries with the kids rather than drag them all through a grocery store. It was! 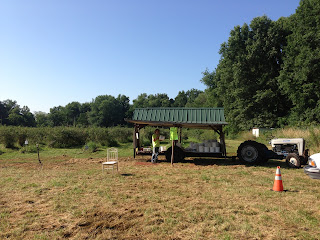 The prices are the same as last year and comparable (or cheaper) to other places. We grabbed our buckets, were assigned a row, and headed off for some picking. 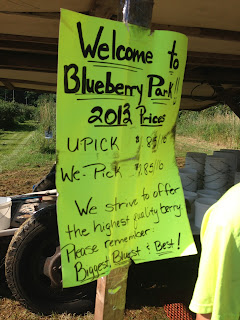 I remembered the man telling my boys to pick the "biggest, bluest, and best" last year. It's still their policy. I really liked that as at other places I have been to, they really encouraged us to pick the whole section clean, as long as they are close to done. Here I felt no pressure to get anything but the best berries! 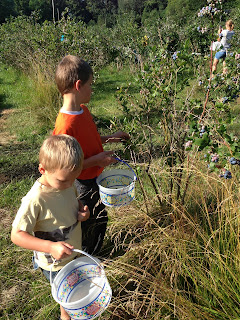 After we started picking a few, I popped a couple in my mouth to see how they tasted. The berries out right now are a little tarter than I am used to finding. I actually asked someone in a nearby row how to tell if they were ready, even though I've gone blueberry picking numerous times. I was picking the right ones, but the tartness surprised me. She said she uses these ones for pie and in sugary cereals. I always enjoy talking to people and seeing what they're doing with their berries and any tips they might have. She mentioned the sweeter blueberries at this farm (Jerseys) were further down the rows of bushes. I also asked about their growing practices to make sure I understood them correctly. They are not certified organic, but only spray the bushes with peppermint oil. Last year, I remember him saying he used fish for fertilizer and I noticed different devices (like hanging CDs) to deflect the birds. 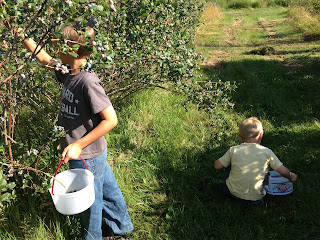 Many were nice and ripe; however, many more are ripening as I type. I always like to see the "serious" pickers while I'm there with my munchkins. The pros often will have some type of harness or strap to hold their bucket so they can pick with both hands. I will say the rows are VERY wide here. I've been to some of the busier places (though the parking lot was full here, too) and felt very cramped with all the people nearby. I felt no pressure to get a certain amount done or to cover an area. We just picked the biggest, bluest, and best! Of course, with a preschooler, it does take a small trial and error until he knows which ones to pick, but he gets the hang of it before too many that aren't as blue make it into his bucket. 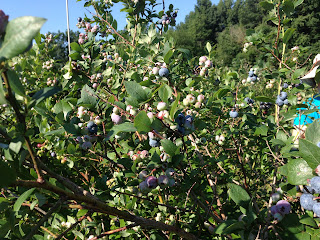 I asked the boys the night before if they wanted to go blueberry picking in the morning and they sounded SO excited. Can you see the enthusiasm now? Honestly, they did seem to enjoy it, but someone was having an "I won't smile for the camera" moment. We picked about $4 of berries in 15 minutes. I had the baby on my back while we picked, though there is plenty of space here for strollers (though it's really wet right now, so wheels might get stuck). We plowed through the berries that same day! The younger guy here took great ownership of them. I often find there is more connection to our foods as we are more involved in it. 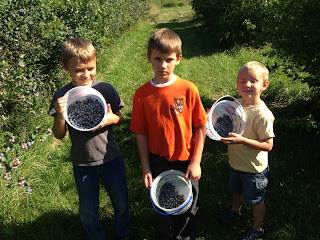 We paid for our berries and went our merry way. I asked again about the practices used and he mentioned the cost to get certified as organic, but confirmed that he really just sprays peppermint oil on it. It also sounds like the smaller, sweet Jersey blueberries will be ready in about a week. 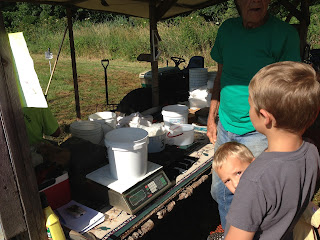 See this lovely pond nearby? It was great hearing all the frogs nearby. Someone caught a tiny one while we were leaving that we saw. It was nice background music! At the same time, while the wetland area is nice, with all this rain, the ground was fairly sloshy! I noticed it near the lake, too. The backyards were really water soaked, just as the blueberry park is. I noticed many wearing boots and they asked if we brought them when we arrived. They try to keep straw and mulch out on the worst parts, but it is a little sloggy! (Yes, I'm using literary devices and making up my own combination word of boggy and sloshy!) You might want to bring your own boots to be more comfortable. Pretty pond! 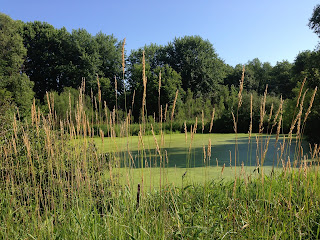 We travel this road quite often and it's an easy place to stop and pick a few without feeling like we need to spend the whole morning picking to make it worth our drive. We stopped by Woodlawn Nature Center when we were done as it is fairly close.

Where do you go blueberry picking in the local area?

I've seen a sign just north of Goshen off of 15.

We also really like the Organic Blueberry Ranch (though the rows are more crowded) Do you have blueberry picking tips to share?

Last year, we picked some and bought others that were already frozen at the Organic Blueberry Ranch. We were a little skeptical about the frozen ones, but they have been very easy and free flowing to use. I think the 11-month-old might turn blue from how many he eats-they've been so easy to give him and probably feel great on his little teeth that are breaking through his gums.

I've also heard that the berry picking place north on CR 6 in Elkhart may be free if you let them keep half of what you pick--I'd check to make sure that's the case, but could be a good deal if you have some time.

It also seems like there are several options over on 31 just south of South Bend.
Posted by Carla Gull at 11:46 PM