The Power of their Own Stuff


We've had sick boys along with a snow day . . . my natural tendency is to be on the go. Of course, I checked out the Inside Outside Michiana Calendar of Events, but knew in my heart that we were spending more time at home nursing fevers. I decided to try following along with the Handbook of Nature Study Outdoor Hour Challenge with the kids. We could still have a little bit of a "Green Hour" while staying inside. Following along with the Outdoor Hour Challenge, I carried a pile of books on rocks and geology, a basket of rocks, some vases with dollar store rocks, and eventually a moving box full of rocks to the basement. The boys immediately dug into the books, but then something interesting happened . . . . 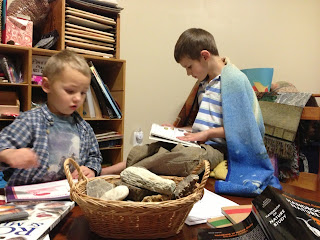 They went and got their OWN STUFF! This book was sitting on the table, but my oldest son had received his own copy for Christmas. He said he's already read everything in it. I had him put his name on it, so we'd know it was his. 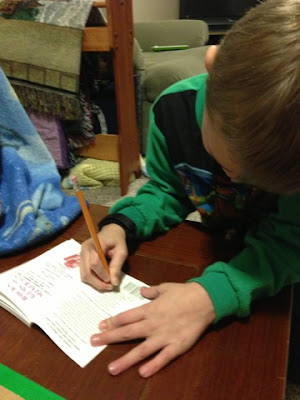 Then this guy pulls out a Star Wars Lunchbox

full of gems and other precious items. The boys have gone "gold" mining at Bonneyville Celebration and other area events. They've also found a few rocks in a Gem Mining Kit 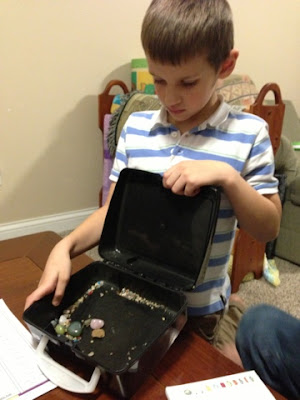 Later, as we began stacking rocks, this guy went and found his own "gems" he bought with his own money from the dollar store. I really tried to discourage him from buying them, but he wanted them for his rock collection! Look at that, he even had them in a small treasure chest! These are part of his treasures! 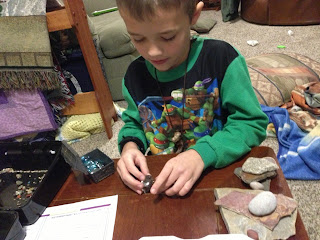 As I reflected on this, I was reminded of how very powerful it is, for my boys at least, to have their own stuff. I had bins and baskets of excellent rock specimens available; however, it was the rocks they had a connection to that held the most meaning to them. Also, while I had many books to peruse, having a book my son owned and had read on his own made it his go to source rather than the many others I had  from several years hosting science clubs and thinking I was an amateur geologist. Hmm . . .

So, application: My kids need FIRST HAND experience with materials and nature. I might have cool stuff and knowledge, but in the end, when the boys themselves make a connection, discovery, and assign meaning to a natural element, they OWN it. It's a process of discovery together. I most definitely am not (and maybe shouldn't) the one who knows everything, but must provide opportunities for them to explore these loose parts, as Richard Louv describes them.