Elkhart County Parks and Concord Mall teamed up to have several activities at the mall this week. Saturday night I decided to check out the 33rd Annual Elkhart County Parks Photo Contest and presentation by Tom Arendt. I recognized his name from Tommy's Creature Feature on the  Elkhart County Parks Facebook page. Pictures are added weekly or so to guess what is in the picture. I've enjoyed the variety of animals and quality of pictures in the feature, so knew I'd enjoy the presentation. I've noticed that Concord Mall has been having more events at the mall. The mall schedule lists some upcoming events. While they are not all nature related, there are many that may be of interest to varying groups.

First, I checked out some of the art work. Wow! Lots of great eyes. There are 3 categories: In the Air, Nature of the Photo, and Activities in the Parks. Only the last category had to be taken in the Elkhart County Parks. Great photos! I would like to spend more time perusing these. I was told there were 113 more entries than they've ever had before, so the photo contest was a popular event! There were also good prizes for the top ribbons. Maybe this is something to try next year! 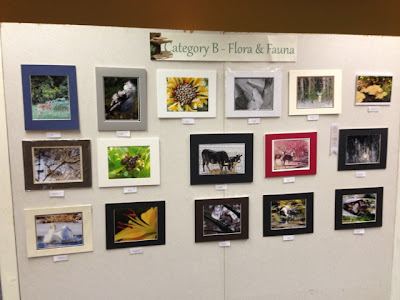 Tom Arendt did the presentation called, "In Search of the Camouflaged Looper". I tried to find him online, but he doesn't have much of a digital footprint. That could be a good thing.

To be honest, the camouflaged looper was not on my radar before, but now I know to look for this inchworm more. This interesting creature actually pastes parts of whatever it is eating on its body to act as camouflage. At the end of the presentation he showed two on different flowers--how very different! Tom shared several tips he had for finding things in nature that others often cannot find. While some ideas seemed simple, the gorgeous pictures, knowledge of the critters, and stories that went along were helpful. I would love to go on a hike with his family sometime!

The following are tips Tom shared . . . watch for movement, something that looks out of place, curled up or chewed on leaves, and odd leaves. Listen for animal calls, rustling leaves, and unusual sounds. Watch for color (thought it's often trash) and color and shape combinations. He also talked about specific habitats. He often uses a screen in aquatic habitats to scoop up specimens to release again later. The striped garden spiders are often found in meadows. In the woods, roll logs to see what is underneath. He cautioned us to roll the log back. If an animal is underneath (like a salamander), move the animal, roll the log back, and then put the animal near the log and cover it up again with leaves. He mentioned riparian habitats where water and land come together. These are usually ripe areas for discoveries. In xeric (desert, dry ground) areas, watch for ant lion pits. In rocky areas, such as the spillway at the River Preserve there are many places for snakes, spiders, and insects. He mentioned rolling the rocks to see what might be under them. The time of day also makes a difference in discoveries. Crayfish are often visible in the daytime. Caterpillars are often nocturnal, so the evening is good to find these. Seasons also offer different species. In spring, amphibians are easier to find, such as the spotted salamander and chorus frog. The breeding grounds are often vernal ponds or pools, such as the pool by the sledding hills at Ox Bow park. In summer, many species are around, such as the foam on the leaves with the spittle bug inside. Fall is a good time to see bald-faced hornet's nests. I know we didn't know we had a large nest until fall this year as the leaves fell away. In winter, bird feeders are a good option, though winter stoneflies are a unique insect that mate in winter and are inactive during the summer. Tom also mentioned to look in odd places and shared a time when they found deer mice in a bluebird house during he off season. He is always watching and always listening. 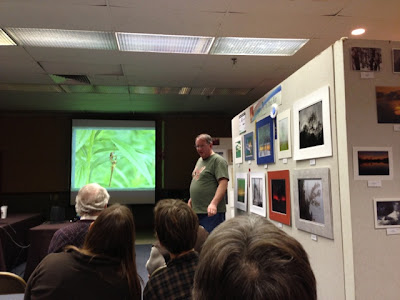 There are several more presentations this week on nature photography, reptiles and amphibians, historic photos, and furry friends. Find the schedule here! I enjoyed talking to another mom with boys at the presentation (we've found ourselves at other park programs before), the parks people, and the presenter! 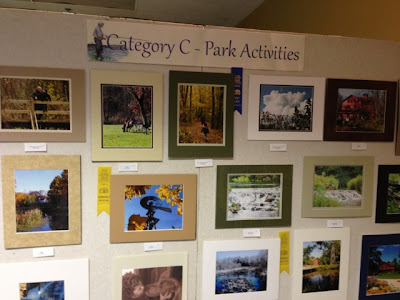