After another Nature Center visit, we tried out the nearby Peppermint Hill for sledding at Potato Creek State Park. The closest parking is in the parking lot across the street from the Nature Center. I asked at the Nature Center and the person there easily told me about it and showed me where it was on the map. I was there by myself with four boys, so understanding the situation as best as possible before we got there was important. We started putting on snow pants, gloves, coats, etc. inside the van. I was almost astonished when we found enough gloves for everyone, even though I didn't specifically check for them before we left. I'm finding a large bag to contain all this portable winter gear is helpful to tote items in the van and keep it together when at home. 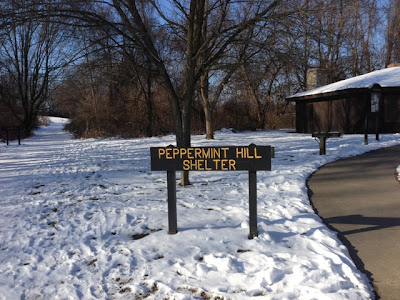 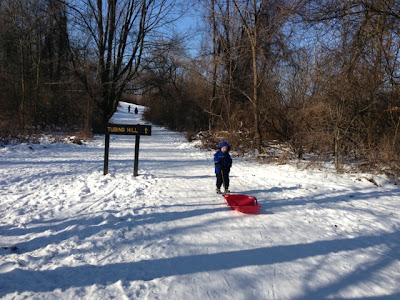 Cute boys . . . hard to see, but there was a small ramp built--these can be painful to go over. We avoided it. The boys (well, some!) became good at steering with their hands on the ground while they were going down. The three year old ended up in the bushes frequently, but didn't seem too upset about it. 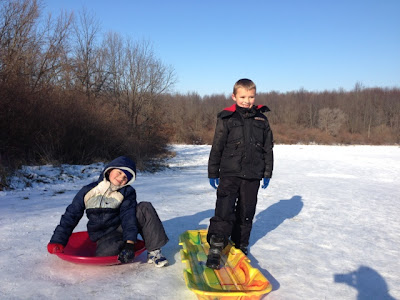 The snow here was hard packed and SLICK. I was holding the baby and trying to give a kid a push at the same time. I went CRASH and the baby went CRASH as well. Risk, right? There was some crying but he eventually settled down. Once he looked like this . . . 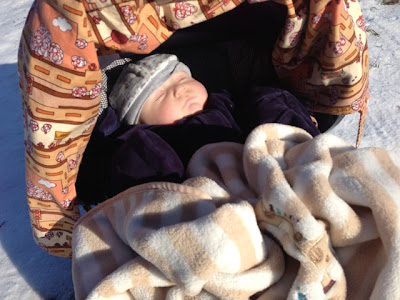 I decided to try this . . . this is the view after we spun around at the bottom of the hill and I had water on my lens! 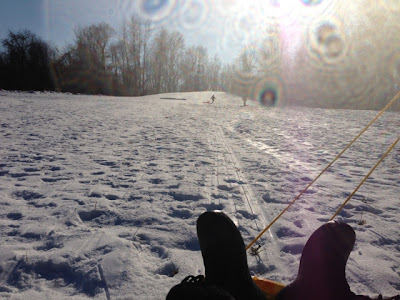 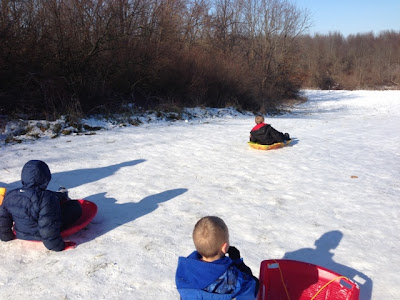 Another group was at the sledding hill when we arrived. They really liked the hard packed snow conditions of the hill. The grandparents brought 6 of their older grandkids to the state park for a few days. They were staying in a cabin, had a fire and marshmallows, played many, many games, went sledding on the hill, etc. Basically, they were having good time with their grandparents unplugged for a few days. This sounds great, even though they live right in Mishawaka. Hint, hint, mom and dad . . . don't you want some "quality time" with the grandkids? Actually, this would be fun for any family and/or combinations of families to get away while staying close. Let me check the schedule! The family also mentioned several of their favorite hills for sledding and tubing in the Mishawaka area, such as Baugo, George Wilson, and Bendix Woods Parks. We might have to make some visits. I will say, I think we've done more sledding this year than we have combined in the last 8 years since we've had kids. Let's get outside, Michiana! 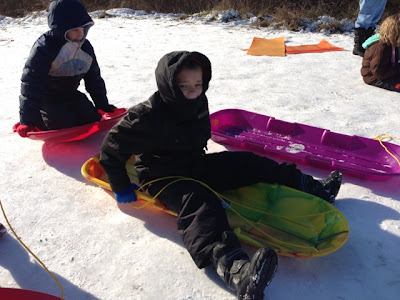 There was a cool looking playground nearby. Of course we had to check it out. This will be great when it's not covered in snow too. My oldest asked, "Mom, do you want to come up too?" Who can resist an invitation like that? Up I went! I've always enjoyed the bridges, too. 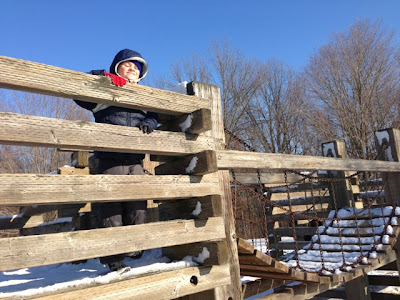 While we had a great time sledding, we also noticed people hiking, cross country skiing, bird watching, and bringing supplies down for ice fishing. Oh, the possibilities of winter! What's your favorite thing to do in winter?
Posted by Carla Gull at 12:37 AM