We love starting the New Year out with a First Day Hike! This is our fourth year doing it, visiting state parks or going out on our own. We have all been under the weather with severe colds for a while, so chose to stick closer to home. I will be honest here, too. While it was neat to see pictures of 200+ people at some of the hikes that we were considering, that is a big large for a good guided hike sometimes. Our cozy hike of family plus a friend was just the right size!

To encourage our sense of ADVENTURE in 2016, we decided to go with a place that is only about 20 minutes from our house that we had actually never visited. Dr. T.K. Lawless Park is an 820 acre park in Vandalia, Michigan. They have many recreational options, such as mountain biking (not during the winter), cross country skiing, inner tube sledding, disc golf, recreational fields (volleyball, baseball, soccer), etc. They also offer camping sites and a cabin as well. We'll have to check this out in the warmer months! We also want to try out the Winter Nights, on some Saturday nights during the winter. The Winter Nights include a bonfire, refreshments for purchase, lighted tubing and cross country skiing hills, wagon rides, crafts, and nature experiences. I put these dates on the nature calendar at Inside Outside Michiana for your convenience and they are on the linked website above. 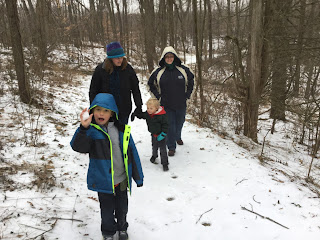 For our First Day hike, it was our first time at the park and we had a sleepy three year old who is getting heavier to carry. The parking lot and trails were also slick. There was a freezing rain last week that probably made it slick here. The top layer was crunchy and icy. As we walked, we could here the definitive crunch, crunch of breaking ice. With the trail conditions and sleepy little guy, we opted for a shorter hike, taking a picture of the trail map in case we were having issues. 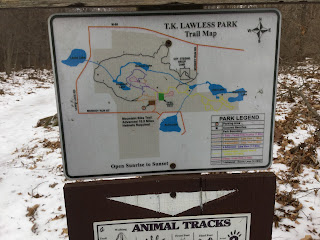 On the path, there were some trees down, but there is a nearby alternate trail that allows you to bypass this. Of course, my boys thought this was a great challenge to climb over the logs and tree branches. I admit, it was fun! 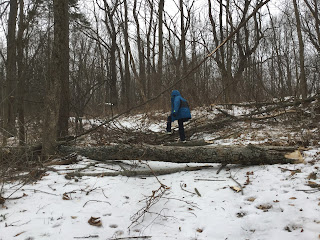 We also were able to find various animal tracks. My smart (aleck) 11-year-old started to point out all the dog and human tracks as well, since we are all animals. The boys started noticing deer tracks before I brought up the the topic--win! They've been out with me enough in the winter to know we will look for nests and tracks--so much easier to see in the winter! 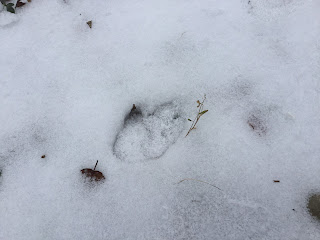 The trails had a variety of interpretive signs along the trail. We had already talked about snags (dead trees) and why they are important in the forest. It was great to see a sign later on that confirmed our answers, even if my husband (another smart aleck) claimed a standing dead tree in the forest is firewood. While he may verbalize things like this, he really is tolerant of what happens on our property and in our house (hello, he bought me worms for mothers day one year--they reside in the kitchen). He leaves the snags alone until they fall in the yard. Logs in the woods usually stay there, allowing the nutrients to recycle in the forest. 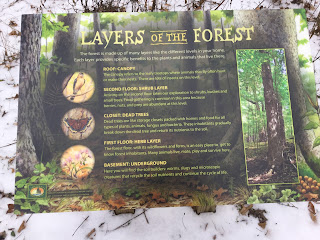 Little guy was having a hard time. He is outgrowing his backpack carrier (sigh!) as he is getting so heavy. Holding a hand helped, but eventually he needed to be carried as he was just too tired. It's typically easier to motivate him to move in the warmer months; however, it won't stop us from getting outside. 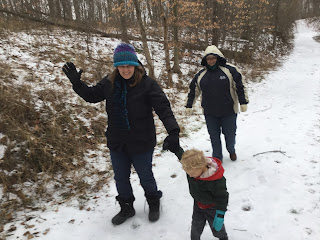 Sticks seem to be very important on a hike. While I typically encourage a stick shorter than a forearm, everyone was using larger sticks as hiking sticks. Someone even needed a really, really big stick! 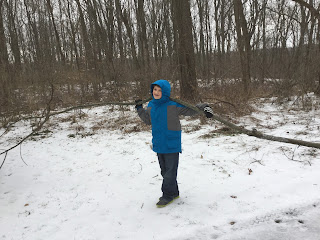 As we hiked, we talked and looked at what was nearby. We found holes in trees, heard woodpeckers, saw the nearby small lake, and investigated winter changes. We built family bonds and friendships. 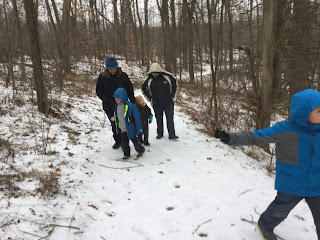 Our six year old was mesmerized with the chunky ice! Where are your gloves? We honestly had them before we left. It was about 25 degrees out--notice the open coat! He did have several layers on below that so I felt comfortable with letting him regulate zipping up his coat. When moving outside, I find my kids (and me!) are warmer when we are active. This was the first winter hike we have taken this season (hello, mild weather!) so were scrambling to find all the gear we like before we left. It's nice to have it in a central location at home.

We changed our plans slightly, sending the youngest back to the car with dad after we'd done the majority of the hike. Too sleepy! Maybe we need to check out the backpack carrier again. Of course, other kids followed suit, but our friend and I pushed on for nice views and conversations. 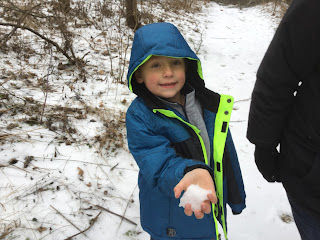 Of course, we needed to traverse the logs in the path again. Oh, the ADVENTURE! Welcome 2016! 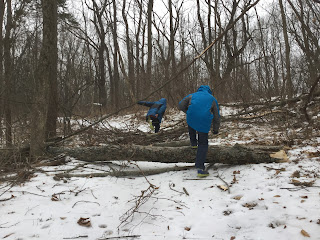 Need help getting out in the winter? Check out Wilder Child's tips for raising kids who love the winter. I agree with every one of her suggestions and tips! In her fake it until you make it suggestion, I would say to push through the complaints as well. My oldest is a bit of a complainer--honestly, he challenges most things incessantly (future lawyer) so I ignore the complaints and keep moving forward with our plan. Once we are out the complaints subside. Additionally, I might say, "Let's try it for 15 minutes," knowing fully well that the kids will easily be out for an hour if we just get outside.

Email ThisBlogThis!Share to TwitterShare to FacebookShare to Pinterest
Labels: Winter