Painting with Worms and Mud!

I found these great plastic worms at the dollar store in the Halloween section. Yes, I bought several packs. My 2-year-old keeps finding the packages and talking to me about worms. Then he finds the Fiber One cereal and calls it worms as well as he eats up the worms. When I finally opened the rubbery worms, though, he wouldn't touch them! He has a book called, Little Feet Love, with all kinds of textures for feet to feel. So we started touching the worms with his little toes. At first he stepped back when the worm was brought near, but little by little he would touch one with a finger. I will say that I really prefer these worms from the dollar store to tackle worms in the fishing section. I have bought worms from the fishing gear in the past for programs and it's really hard to find them without an oily substance on them that helps in catching fish. Who wants to play with all that? These are just perfect for what we wanted to do.

We had a little extra time, so I thought, why not paint with the worms? I'd done this at a Growing Up Wild training this spring, but hadn't tried it with kids yet. My son gathered a little dirt in a disposable container (though I'll use it again). We mixed it with water and then started using the worms as our paint brushes. 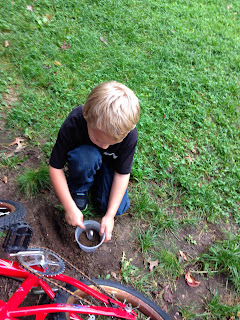 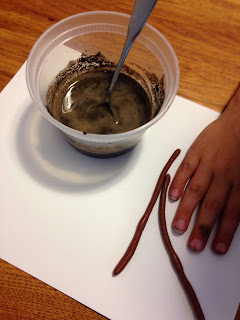 That facial expression is really concentration, rather than boredom. He tried several painting techniques. We found we needed to stir our mud "paint" as the dirt separates from the water. At the same time, it was also neat to have these differences of consistency, since we had totally different experiences with the various textures. 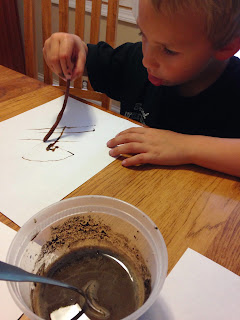 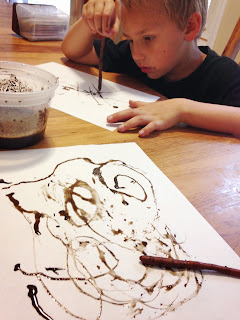 I dropped one worm all the way in the paint on accident. I decided to embrace it and try a different technique. Rolling it left lines from the ridges of the worm. It did get a little messy, but we embraced the mess as we were playing with dirt! The textures, like the grit of the dirt and muddy water, were fun to experiment with. 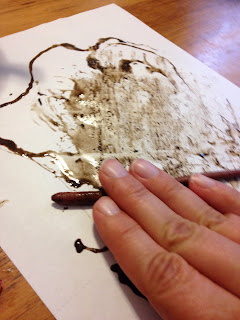 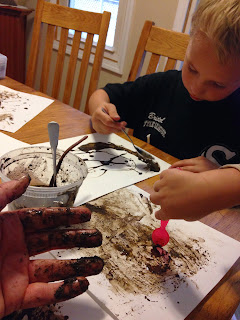 The 2-year-old who still didn't warm up to using a worm for painting decided a spoon might be okay. He even went and got a special red spoon to use. His older brother copied this technique and really dug deep for the thicker goo for an interesting effect. 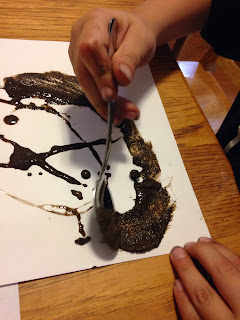 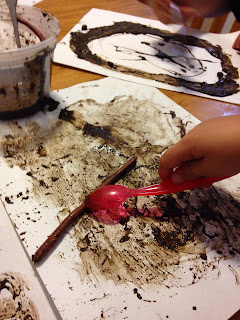 We even smelled our paintings! It smelled just like the earth right after rain! I love that smell. It reminds me of a song from Primary, When I Am Baptized, and how the earth naturally cleans itself. 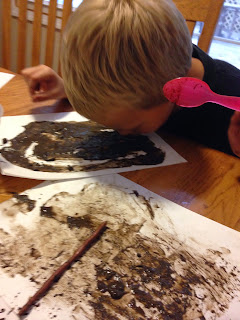 We will definitely revisit this technique again! I can't wait for International Mud Day next June! :-) They have several resources for mud play on their website.

A few ideas I have to follow up with this:
What ideas do you have for playing and learning with worms and dirt?
Posted by Carla Gull at 7:25 PM