This weekend, I stopped by Better World Books in Goshen for an author talk by Stephen Russell, who wrote The Essential Guide to Cultivating Mushrooms. My sister and brother-in-law had done some cultivation in the past and were interested in what the author had to say. I decided to tag along and learn what I could learn. I have been following the Hoosier Mushroom Society online for some time, so was familiar with what they are doing. I had found an article about the event online from Flavor 574, which piqued my interest in learning more. 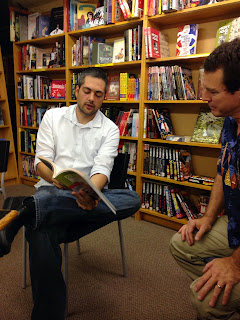 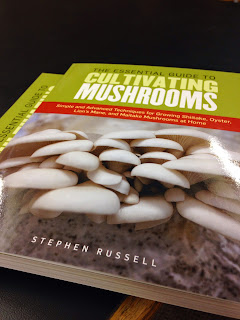 Mushroom Cultivation
We were a small group, so Mr. Russell opened the floor to questions and just conversation around mushrooms. My brother-in-law had very specific questions about filters and such and was able to hear about some good options and resources for what he needed. He is looking at small scale commercial mushroom cultivation to add to our local food economy, so we worked through a few questions on logistics and such.

We also discussed mushrooms in general. Grocery stores typically have a limited variety; however, there are so many more options for cultivation and wild gathering. Cultivating mushrooms allows people to have a greater range of mushrooms. In the Flavor 574 article, he said, "Russell says that cultivating mushrooms in your home or yard is a good idea for anyone who enjoys gardening, eating organic and locally produced foods or just having access to a wide variety of mushroom varieties." Flipping through the book, the easy to follow instructions and ample photos made me more interested in cultivating mushrooms. I thought, "Even I can do this."

Oyster and lions manes seem to be the easiest to grow. Shiitake are harder, though any kit should produce some results. The process for cultivating mushrooms is the same on a commercial level as it is on a home based level. Any part of mushroom can be cloned. The mushrooms can be cultivated on many types of substrates, such as sawdust, popcorn kernels, rye, and more! Contamination is a big deal, so sterilization is important in the process. If interested in cultivation, I found the book to be very helpful with a step-by-step process of what needs to be done for success.

Foraging Wild Mushrooms
A friend asked, "What's the big deal about morels?" The response is they are the first good mushrooms of the year, they are easily identifiable, and they are valuable at $40/lb. The best morel hunters are often the better skilled tree identifiers, as morels seem to like elms, ash, sycamore, and the tulip poplar.

Russell started learning about mushrooms more in college, as he started cultivating mushrooms with information he found online. He realized little information was available and started a path of self-study, research, and experimentation, to where he is know recognized as the person who knows the most about mushrooms in the state of Indiana. He has master's degrees in public policy and environmental science. Even while he has a vast knowledge of mushrooms, he reiterated how very much we do not know about fungi. There is no field guide of mushrooms for Indiana. That may be his next project; however, he needs to spend more time cataloging what is found in the state. On his website (www.mushroomfarm.com), he is cataloging many of the mushrooms found in the wild. Russell has about 400 species identified; however, he said he has another 1000 species that he has documented in Indiana, that are not up on the website yet. He said there are 3000-4000 species in Indiana, but with no field guide for the area, many cannot be identified. He also mentioned finding a mushroom in his own backyard woods that had not been documented in the state. If it's right there in his woods, he said it must be fairly common in the state. There is so much more to learn and document. On his Mushroom Species page, he does caution these are his field notes, "They are online at this point because while not complete, they still have valuable information. **These pages are not meant as a final reference, so do not base your ID's off of this website alone, especially if you intend on eating the mushrooms. Mushroom identification can be dangerous when done incorrectly, so we cannot be held responsible for ID's finalized from these pages.*'As a newbie, they have very valuable information! It's a start in a great mushroom resource for the state of Indiana.

I asked a few questions, like how old he is. He is only 30, so it's quite impressive that he has gained so much knowledge on the topic. He said he is attracted to the science of fungus and doesn't even prefer eating mushrooms at this point. He's seen them in all states of decline; however, he will eat them on occasion. He's not in mushrooms for the food, but to understand them. I'm not sure about you, but I've heard you should use mesh bags to the spores could spread if collecting wild mushrooms. He mentioned, the mesh bags are more to allow the mushroom to breath and that the spores would typically be dispersed by the time they are collected. Another myth busted by an expert!

A Recent Mushroom Hike
Russell mentioned that most people do not go on mushroom hikes (though he hosts one through Hoosier Mushroom Society in a different place of the state each month), but I actually did take a walk last week, documenting the various mushrooms I'd found in the woods at a local nature center. This is a protected area where collecting is not allowed, so I let the mushrooms be; however, I enjoyed seeing the diversity while I was on my recent hike. Russell went through my pictures on my phone and easily helped identify most that were distinguishable. He mentioned wanting to take pictures of the underside to really document and identify what is found, but made do with what I had available. Lessons learned! :-)

The first is a type of a chanterelle. The underside should have ridges (sometimes called false gills), not gills. There are 6 to 7 species of these in Indiana that are known. 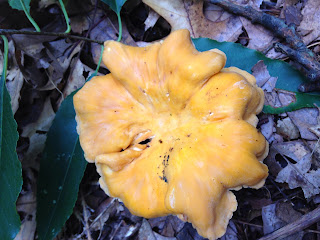 Next up was hen of the woods. These are good fall wild edibles. The purple tooth fungus on the right has teeth on the underside. This is an aged specimen. 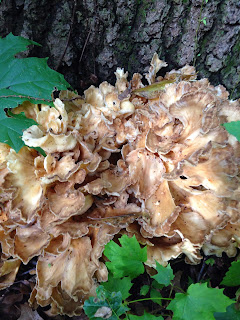 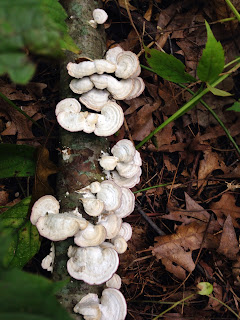 A cinnabar or red chanterelle was up next. What a vivid color! On the right is a type of fungus with a parasite. 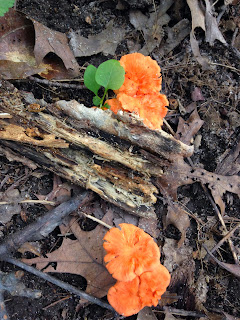 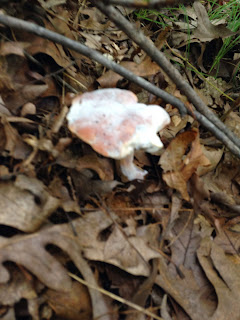 False turkey tail is on the left, with chanterelles on the right. 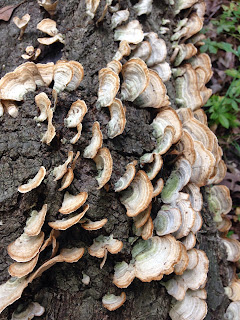 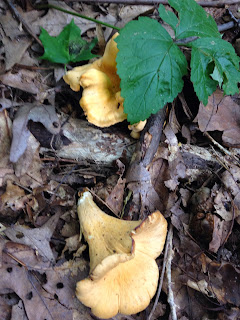 This witches' butter is a type of jelly fungus, that looks slimy and brightly colored! 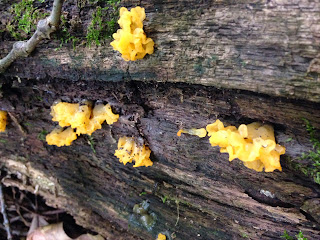 Indian Pipe, may look like a fungus, but it is actually a plant with no chlorophyll. It takes nutrients from a tree and fungus at the same time to subsist. The fungus and tree have a mycorrhizal relationship. 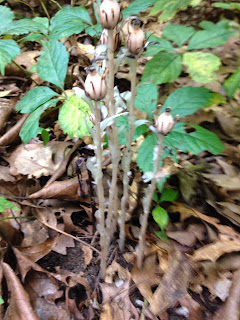 I also had pics of turkey tails and false turkey tails. I couldn't remember which is which. I'll need to visit my specimens again and do more studying. Here is an article on the imposter mushrooms.  Truly, the best way to learn wild mushrooms is by going with experienced mushroom enthusiasts and learning from direct observation and inquiry. 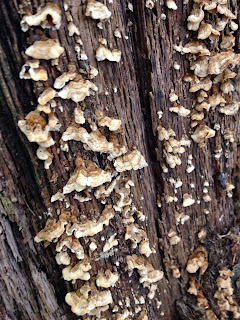 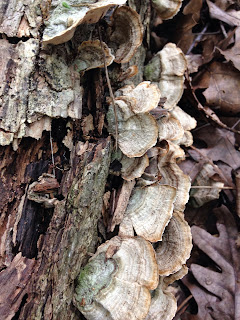 If mushroom hunting, here is the Hoosier Mushroom Society's take on collecting on DNR property. They also host several hikes each year, with one coming up in Chesterton, IN, in October of 2014. The website has useful articles and forms, such as these species collection forms.

The whole evening was interesting. I asked about storing mushroom specimens. He said to air dry the mushrooms until cracker dry and then store in wax paper bags.

Mushrooms at the Grocery Store
We stopped by the grocery store after we left. We found button, portabella, and shiitake at the Kroger in Goshen. Shiitake actually happened to be on manager's special so I grabbed some for an omelette over the weekend. We also found a few dried varieties, but there was no price there. They can get pricey!
Posted by Carla Gull at 7:27 PM