Earlier this week, I was able to bring my niece and nephew to their first session of their Outdoorsmanship Class at Camp Eberhart, which is a YMCA camp in Three Rivers, Michigan. 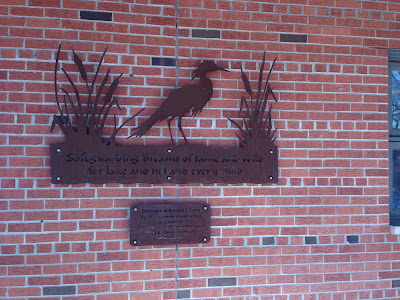 Of course, the drive was snowing, but it was accessible. 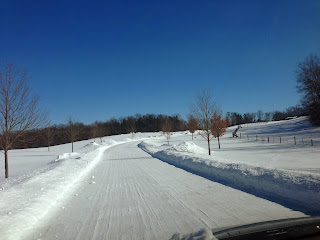 Sam conducted the course. He recently graduated from college and has lots of enthusiasm to share with the children. As an ice breaker, he had the children play the toilet paper game, where each person grabs as much toilet paper as he/she thinks they will "need" and then shares what one fact about them for each piece of toilet paper. I've done this lots of times in classes and with groups to help get to know each other. I like how he simply helped the children share the expectations and guiding values that permeate the concept of the YMCA: caring, respect, honesty, and responsibility. 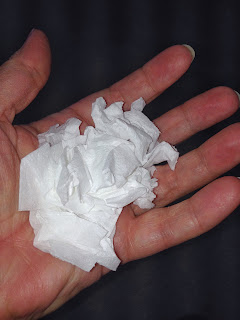 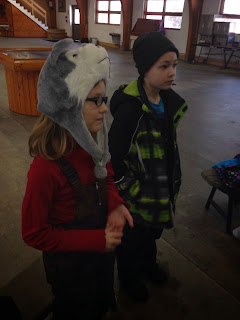 Sam used a flashlight and a styrofoam ball on a stick to show how the earth turns away from the sun during the winter so we have colder temperatures. This was a good illustration to see what was happening on a larger scale. 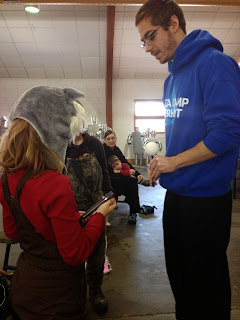 Later we went outside and the kids experimented with the snow a bit. It was a cold day and there was little moisture in the air. It was hard to make a snowball; however, when Sam added water to the mix, they were able to pack it. I've heard Inuit have many, many words for snow. We have to add lots of modifiers to describe the snow we have in English. 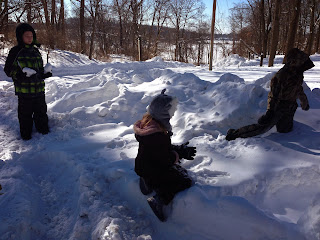 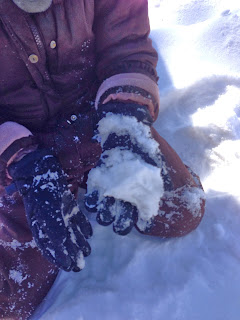 Of course, they had to throw the snowballs at their fearless leader. 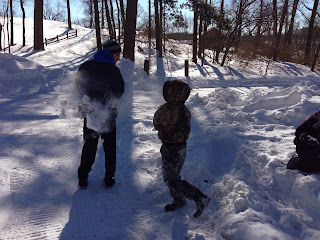 We walked around the camp, checking out the horses in the field, the tubing hill, ropes course, and water features. It looks like it would be a fun place to stay! 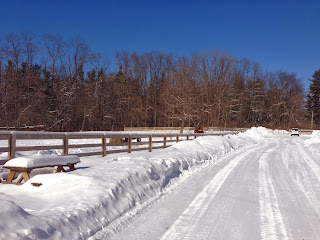 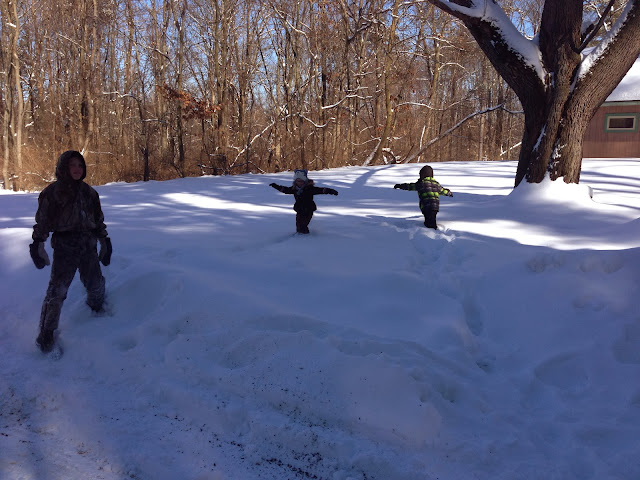 I liked seeing the remnants of various shelters around. 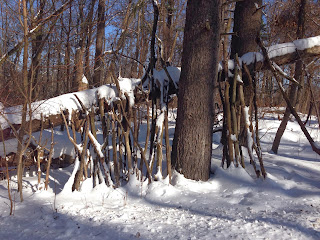 The lake was covered with snow, but I see great potential for fun in the summer. We could see animal trails through the snow. 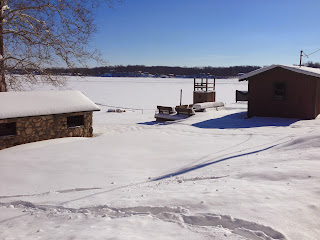 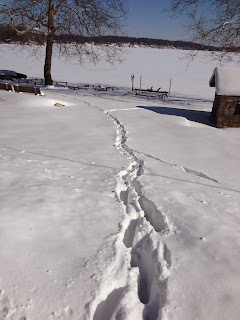 All the gear is stashed for canoeing and other summer fun. 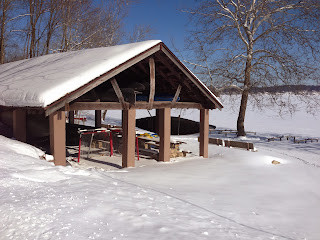 Here, we could see what Sam was calling a tree well, a sheltered hole or place where animals can take shelter in extreme weather. They had fun trying to figure out what was in there! 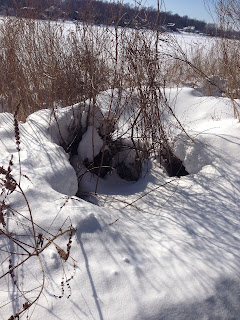 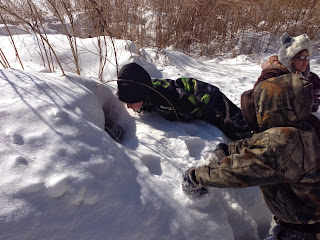 They also talked about how some plants (like pines) are still green, mentioning these leaflets are covered with a wax to protect them. We checked it out up close! 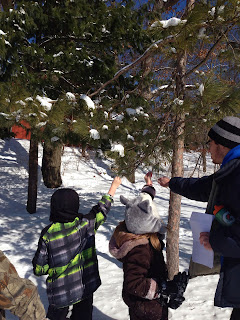 Back inside, we looked at the various adaptations animals have to survive the winter. Each adaptation had something for my niece to put on to help keep her toasty! For example, for the beaver, she had a raincoat. These helped the children visualize the elements. 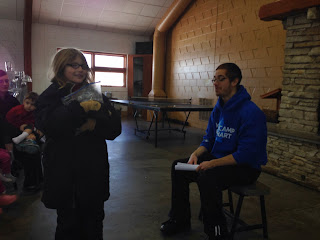 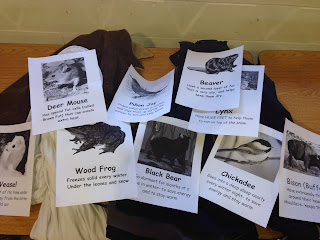 Looking around the building, I saw the neat activities and programs they have available--these look like fun! 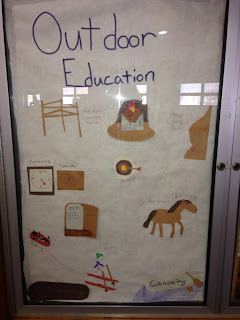 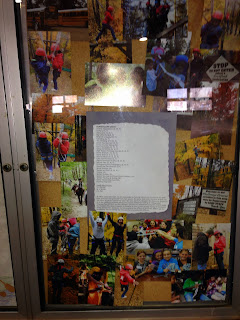 Later, they made cut snowflakes and had a snack of hot chocolate and homemade granola. 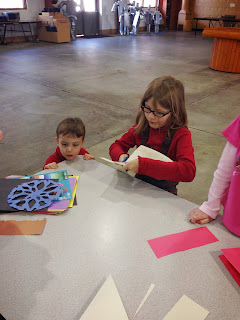 They spent time playing king of the mountain outside and climbing on big snow piles! 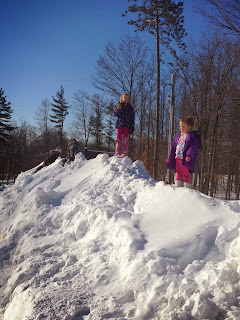 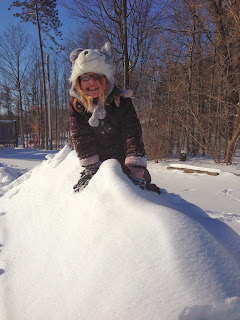 I love the girl power! The kids will continue their course throughout the semester. I look forward to joining them again! There are also summer camps for kids, day camps, and even family camps. I think the family camps would be fun to try as they have so many amenities. 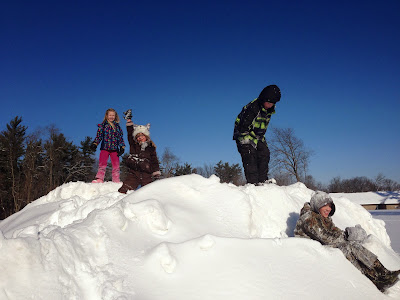