My son turned six this weekend! He has really been enjoying Master Chef Jr, along with his brothers. He enjoys helping cook, garnishing things, and made a great triple decked strawberry shortcake recently. He even whipped the cream on his own! Having a cooking contest was a perfect way to celebrate his birthday! We even got him a chef's hat and jacket but he wouldn't wear them. He would have been even cuter than he already is with them on. See our tips on hosting your own Master Chef Party at the end of the post.

For the contest, we brought veggies, cooked chicken, several types of pasta, ingredients for past, sauces, seasonings, etc., as well as a few tools, such as a pasta maker. A friend (thanks, Ryann!) gave it to us after she found out our 8-year-old has been interested in making homemade pasta. I will say we have more to learn on how to use it! :-) It will be a fun journey. We've made homemade noodles a couple of times recently and the boys get really excited about and think it tastes great. 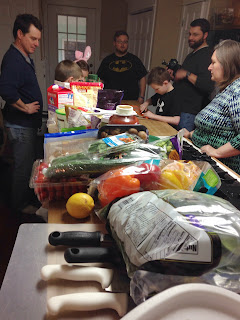 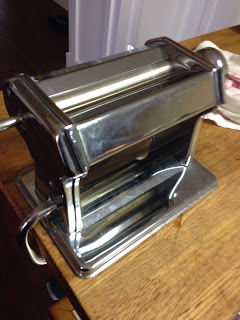 We divided into two groups with a little help from the adults, naming two judges. We decided we would judge on appearance, taste, and team work. It was neat to see the kids working together making salads and pasta. 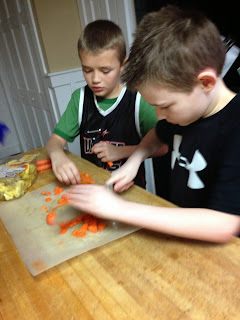 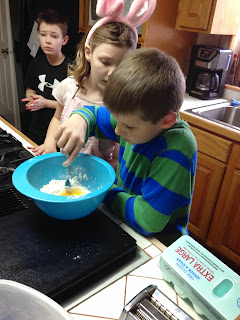 The pasta didn't quite work the way the kids had hoped, but we'll keep practicing this! In the end, they just rolled this up in small balls and then cooked it that way. 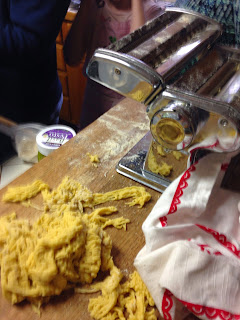 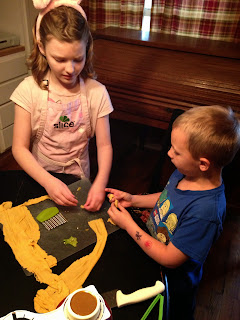 The kitchen was busy, with the men and kids all working with their teams to make great food! You can see the pasta balls below. 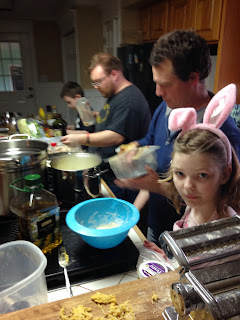 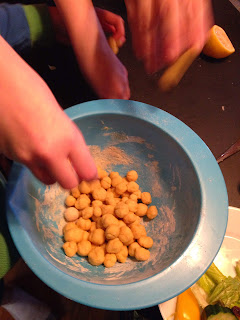 Here they are plating the dishes. My two middle boys are always talking about garnishing, seasoning, and such after watching Alton Brown and Master Chef, Jr. They have their own ideas on what is cool as well and like experimenting. 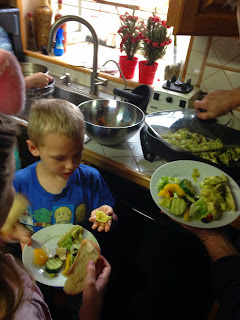 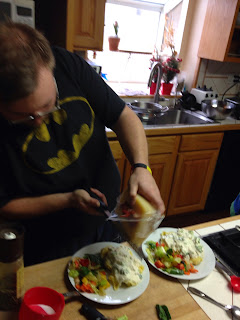 The dishes were delicious! One team made a prepared fresh cheese pasta with a homemade Alfredo sauce, with broccoli and chicken. Their salad was colorful with lots of texture and a maple vinaigrette and raisins for a hint of sweetness. Their bread was lightly brushed with olive oil.

The other team used the prepared fresh pasta as back up with chicken and pesto sauce. Additionally, their homemade pasta balls were drizzled in olive oil and lightly seasoned with a Porcini Parmesan salt (I LOVE this stuff!). Their salad had good texture and was seasoned with the salt. Their bread had a neat twist with butter and a nice basil leave on top.

It was hard to make decisions as both plates were quite good. Both ended up with praise and accolades. I think some wanted a clear "winner" but we decided we were all winners as we were able to eat great food. 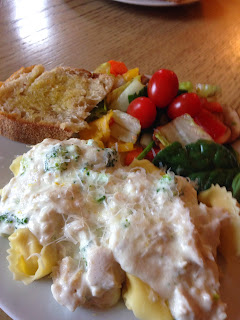 We ended opening presents and eating an ice cream cake, decorated with Pokemon characters, because he is still just 6, not quite a Master Chef. :-) The kids and adults had a great time and were excited throughout their busy time cooking and eating. I will admit that I was exhausted by the end of washing all the dishes, yet was happy with the results. I'm thinking of other ways we can do this in the future. 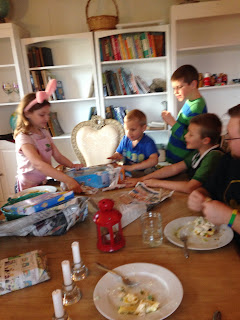 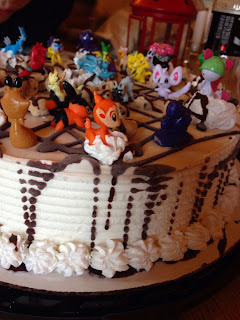 If you're thinking of hosting your own cooking competition, I would suggest the following:
This was a great experience! I'm sure we'll have more competitions in the future, whether it's pudgy pies, desserts, or whatever it may be. I like that my kids are excited about cooking and learning new skills. I also like that they know where there food comes from to some degree. The eggs for the pasta just came from the organically fed chickens in my sister's yard. They know food isn't just to be microwaved, but a process to enjoy with friends and family.

We went simple on our party, but many others on the world wide web have other ideas for a fun cooking party. Check out a couple here:
Junior Chef Cooking Party--this has several fun food related games that don't have to be complicated or as intense as a full fledged dinner competition.
Kids MasterChef Party--great ideas, such as the mystery box challenge, cooking lessons, and games.

Over the last two summers we had a couple of neat experiences with local cooking. At a Goshen First Friday, Edible Michiana had a taste test for children, starting with something known, like a strawberry and moving to a pea and a piece of rhubarb. My second son still likes rhubarb after that experience! Additionally, at the Elkhart County Fair, the FREE kids cooking classes and related activities were a great way to try local foods and get kids cooking. They made pizzas with Antonio's. Each child had a knife, chopping board, herbs, and all the ingredients to cook along with the chef. It was great! We will make time for this at the fair again!