Maps and compasses! I helped with Cub Scout Day Camp last year, too, in the same capacity. It's neat to see the boys learn about a skill that is seeming more and more outdated, though is still very important. With GPS capabilities in our cars, phones, cameras, and more, do we still need compasses with magnetic north and maps to find the way? I say yes!

We are in a transition in this area, though, so I'm curious as to where we go and if requirements to learn about these will be changed. I asked my husband who said GPS units can run out of batteries, be subject to selective availability (used previously so only military had precise measurements--not used after 2000), it's easy to keep a record of your track in coastal waters (he's from a Navy background) and is required by law in these cases, etc. "Prudent people will always have a paper back up, that doesn't run out of batteries or is not dependent on a satellite system."

We started our session talking about basic map skills, highlighting the compass rose, Never Eat Soggy Wheat (North, East South, West), how to orient a map, basic parts of a compass, magnetic north, the concept of a pace, and how to use the compass. I had a great, ENTHUSIASTIC helper who made it much easier. Thanks! He took half the boys to work on map skills in more depth while I took the other half to the field to work on using the compass.

This was the center spot. We always came back here for our next direction, though these could be set up in different ways. 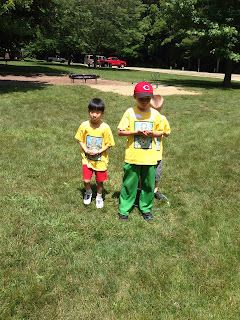 Here are a few tips from a Cub Scout group. These are my tips for using a compass:
The boys were excited to find a treasure chest at the end of each coordinate. The theme of the camp was High Seas, so there was a pirate theme to the activity. It was well put together; however, there were too many items for us to do in the amount of time available, so we just modified and did what we could. There are great volunteers that put all of this together! 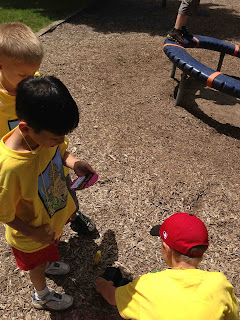 Counting paces to the treasure. The nearby playground was a huge temptation! 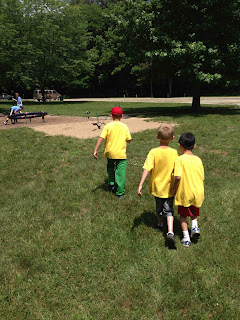 Note the boy on the let has a proper flat shelf to hold the compass correctly. My son on the right with the lovely look on his face needs to back his hand back up to his chest, with the pinky along the top of his belly. 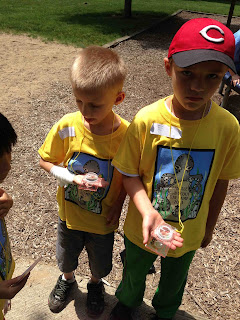 As we were leaving we saw a tree that was recently chopped down. My younger son returned each day to this spot to watch decomposition in process. He was excited to see it each time and just as curious on each observation. Connecting with nature doesn't have to take long, but taking time to be exposed to it works wonders. 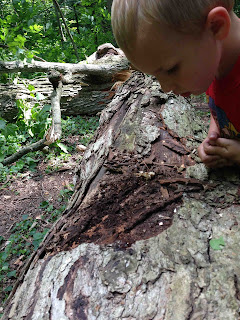 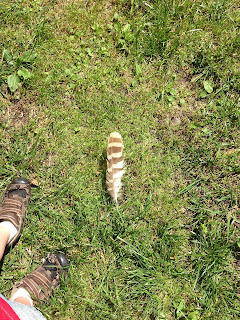 Would you like to work on orienteering? There is a course set up by Boy Scouts near New Paris. Stop by the Elkhart County Parks office in Goshen for a copy of the course. I want to try it out, too!