On our way to my son's scouting activity on Wednesday, it was raining and sunny. I quickly exclaimed, "Look boys--there should be a rainbow out!" They quickly found this in a nearby field. It looked like we could have found the pot of gold, we were so close. It was fun to hear my 4-year-old ask where the rainbow was the next day as we passed the same area. He's developing understanding of these prisms of light! 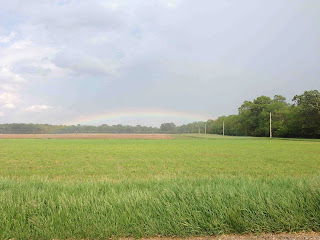 Fees are in effect at Ox Bow right now. It is $2/car or $20 for a pass that lasts until the end of 2013. We went ahead and purchased a season pass as I thought it would make it easier to have short jaunts when we're in the area. I've found this to be true often--if I have a membership, I don't mind going for a short while rather than having to make a whole day to get our moneys worth. Once in Ox Bow, we met over at the first playground to the right. There are several great features right there--a playground, a shelter, and trails nearby. We used them all! 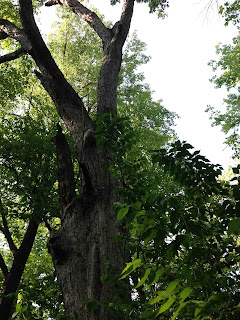 My son and I took a little hike nearby. Sometimes I just like to look up and see the shape of the trees, the leaves, and the interaction with the sky. 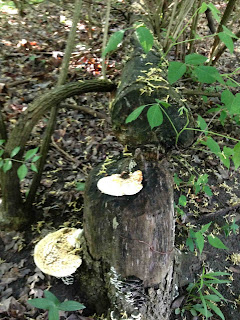 My oldest son noticed these mushrooms--he's getting better eyes! However, he didn't notice the unique features of the downed log. It was chewed by a beaver! We checked out the river nearby, but missed the long gone beaver. 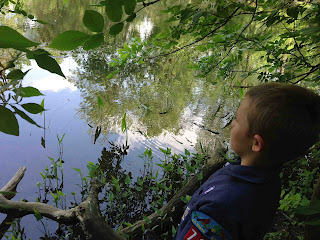 We had a cookout for dinner at the shelter. The raccoons were very friendly, hanging out near the trash cans, hoping for a scrap of food. They obviously have been around enough to expect food and scraps to be left. We saw Canada Geese acting similarly at Island Park in Elkhart and have seen squirrels like this in Howard Park in South Bend. It's best not to feed the wildlife. Let them be wild. The next day, I ended up taking another tame raccoon over to a naturalist at Ox Bow to bring to a local rehabilitator. 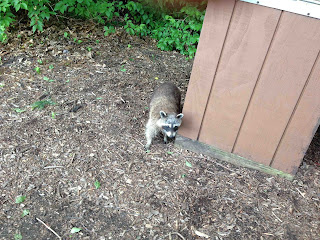 We ended with some active games. This one included a story about alligators and staying in the boat. It was nice to be outside. There were many families out and about, taking walks, playing soccer, hiking, using the playground, and more. This is truly a multi-use site! 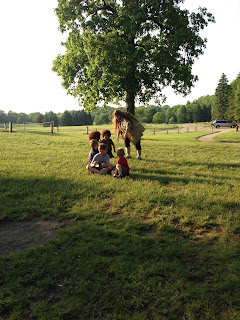